that are competing for the same market but are vastly different are the Trijicon ACOGs and the Aimpoints.  Mainly, these optics are marketed to the owners of America’s favorite rifle—the AR 15. Both makers are considered premium optics manufacturers, and both are actually used by the United States Military.

ACOG vs. Aimpoint:  What They Have in Common

Both optics are designed for the AR 15 or the military equivalent of the weapon. Both weapons are designed to be run hard and put away wet. Surprisingly, there is not much else these optics have in common; they are very different in design and how they operate. Both feature a variety of different models in their lineup, but they are all extremely similar and often very in little ways.


First off, the Aimpoint has an amazing battery life in all their optics. The small, hyper-effective reticle drains battery extremely slowly. The Aimpoint Comp M4 (see full specs) can last 8 years without having to change the battery.  Yes, eight continuous years of use. The more affordable Aimpoint Pro lasts up to 3 years. This is an absolute absurd amount of battery life, but it works so why not.

The Trijicon ACOG LED model has only 12,000 hours of battery life. The Trijicon reticle options are quite a bit more complicated than a simple red dot reticle, and this causes more battery drain. It would appear Aimpoint is the clear winner, but not so fast. The ACOG LED is the only model that takes batteries, all other models work with a combination of tritium and fiber optics to provide an illuminated reticle. This is a battery free process so ACOG kind of wins too. 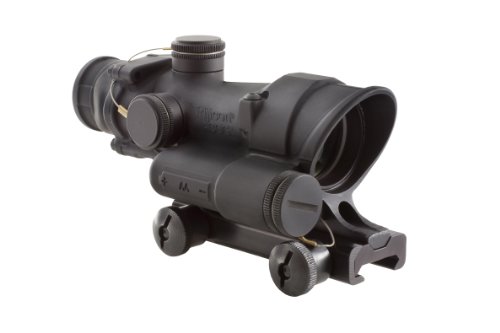 
There isn’t much to say about the Aimpoint reticle, and that’s not a bad thing. The simple red dot is very easy to use, requires little to no training, and can be used by anyone. It’s as simple as putting the round red dot on target and pulling the trigger. The simple Aimpoint reticle makes it easy to use in close quarters combat because there is no thinking involved. Red dot, target, pull trigger.

The ACOG series of optics has a ton of different options for reticles. These include circle and dot combinations, Triangles, Chevrons, a standard crosshair, and more. These reticles options vary between models, but they are often more complicated and used for a variety of different purposes. My personal favorite is the Chevron and Bullet Drop Compensator (BDC) model. 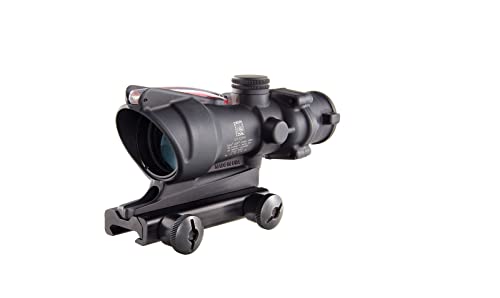 This BDC is very accurate with the right ammo and the right weapon and allows shooters to reach out and hit man sized targets at 500 meters with ease. Using the Bindon aiming concept, the red chevron acts just like a red dot for close quarters combat. With the ACOG, you get a lot more options, and options are good to have. These options also offer more versatility.

Both optics are made from a hardened aluminum and both are nitrogen sealed against fog. Both optics are shock proof, and have been extensively fielded in war zones around the world. There is actually a story about an ACOG taking a round in the casing and saving the Marine’s life. I’m handing the round to ACOG purely on the waterproofing ability, but I want to clarify that both optics, like Timex, are capable of taking a beating and keep on ticking.


First and foremost, there isn’t really any controls of most ACOGs outside of the LED mounted variant. The only real controls would be the elevation and windage adjustments. These require a tool to manipulate and make adjustments. The Tritium insert is always on. The problem with this is sometimes the reticle is just too bright and the only way to dim it is to use tape or something to cover the tritium insert. Hardly scientific, but it works.

Aimpoint has one large knob that turns the optic on and off and adjusts the brightness levels. The adjustments for windage and elevation are identical to the adjustments on the ACOG and require a tool of some sort. Aimpoint wins here because I can control the brightness as the click of a dial.

Aimpoint vs ACOG:  Ease Of Use (Aimpoint)


Both optics are extremely simple to use and require basically nothing to operate. Zeroing is simple to do with both optics. The way the Aimpoint takes even a small advantage is the fact the reticle is so simple to use. For its intended purpose, the Aimpoint reticle isn’t as versatile, but is way simpler to use.

The ACOG optics line have a variety of different magnifications, objective lens size, and reticles, but they are basically all the same optic, and at the same high price.

An Aimpoint Pro can be had for a lot less than an ACOG. Ultimately, though, both are excellent optics, but I would personally prefer the ACOG. I like the versatility of the optic, and find it to be better suited for a wider variety of objectives. Aimpoint optics are still an excellent choice and have proven to be outstanding optics. It’s really up to you!