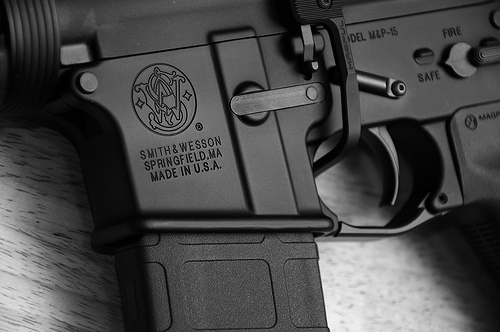 your AR 15 trigger? Why not upgrade is the better question. The AR 15 is used for everything from casual target shooting, to hunting, to military and law enforcement use, to personal defense or as a working ranch rifle. Needless to say, making sure you have the right AR15 trigger upgrade for the task at hand is extremely important.

Given the rifle’s insane popularity, over half century of regular use, and easy customization of the platform, there are a number of aftermarket triggers available to enhance your gun, and we examine the top AR15 triggers for the money. And we also go into what you should look for when selecting the right AR15 trigger after our recommended products, which can all be purchased at an online gun site like Brownells.

So, without further ado, here are the 4 best AR 15 triggers on the market: CMC Triggers build their precision AR 15 triggers in Texas, which is where you would expect a high end trigger for America’s favorite rifle to be built. Once again, designed to be a simple drop in trigger upgrade, the CMC has an astoundingly light three and a half pound single stage pull, making this smooth as glass AR 15 trigger ideal for target and rapid competition shooting sports. An American made trigger made for sport shooters by sport shooters, this is one of the best AR trigger choices for an under four pound trigger on today’s market. Timney is probably one of the first names that pop into your head when you think of custom triggers for any rifle. They are a well known and highly respected firm that has been offering match grade triggers for decades (going back to right after WW2--1946) and of course offers an AR 15 trigger. Their single-stage, 3-pound match grade trigger is a simple but gorgeous drop in affair. This means you just remove your old trigger, put the Timney in its place, and reinsert your trigger pins. The lightweight pull is ideal for competition and hunting, where a smooth, light pull is desired. Almost assuredly the best drop in trigger for AR 15 for the money, the Timney, like Rick Astley, will never let you down.

In an acronym filled world, POF EFP translates as Patriot Ordinance Factory Enhanced Trigger Placement, which is both several mouthfuls and a rather impressive AR 15 trigger. Like most of the best triggers for AR 15 rifles, the POF EFP is a simple one piece drop in assembly. Featuring a crisp but light 4 pound trigger pull, and a custom designed trigger designed to be more comfortable and easier to operate, this AR 15 trigger offers uncompromising quality with a touch of human engineering to make it one of the best choices for an AR 15 trigger on the market.

Best of all, the Velocity trigger system is adjustable between 3 different weights. It does from 3 to 4, or to 4.5 pounds. User-adjustable triggers are a fantastic addition to any rifle. Being able to control just how heavy your trigger is an absolute must-have for precision shooting. This allows you to set the trigger at the weight you shoot best at.

The Velocity Triggers drop-in model takes about 5 minutes to install and boom you are range ready—making this one of the best AR15 triggers around.

The story of the AR-15 begins back in the 1950’s with Eugene Stoner’s experiments with a modern gas impingement rifle made of aluminum and synthetic plastics. Radical and “space age” in appearance for the time, Stoner’s work at Armalite lead to the creation of the AR 15 rifle platform, which of course became the famous M16 rifle, which became all too well known to a generation of young men in the distant jungles of Vietnam. In 1963, Colt brought the AR 15 to the civilian market in a legal semi-automatic form, and in the last fifty years, the AR 15 has become the most popular center-fire rifle in America.

Given this history, the most common reason to change your AR 15 trigger is to get a smoother, lighter, more accurate trigger. Common mil spec rifles have a trigger that breaks at about five and a half pounds, and can be somewhat stiff. Common trigger improvements involve polishing all surfaces that contact with each other to make the pull lighter, crisper and smoother. However, there are a great number of drop in trigger packs that simply require you remove your old trigger assembly and pin in the new trigger pack. These AR 15 triggers can often be adjusted for trigger pull weight, length of travel, or any number of other advanced features.

The best AR 15 triggers will give you a lighter trigger pull. This means less energy is spent to pull the trigger, which means more accurate shots and a faster followup if you need. Additionally, the best AR triggers will be more ergonomic and comfortable for the shooter. Standard mil spec triggers are not always the most comfortable thing in the world. While they may be fine for combat or casual shooting, changing to a better quality trigger will immediately enhance your shooting ability and improve your accuracy. Lastly, the top-end AR 15 triggers will be made of high quality materials. In this day and age, there is no reason to settle for less. Modern manufacturing methods have blessed us with precision triggers made on computer controlled milling machines, and then assembled into a precise unit that just a few years ago would have been an expensive custom operation. Nowadays, we enjoy the best triggers for AR 15 on the market, with a variety that our parents could only dream of. Isn’t it time you put one in your AR 15?