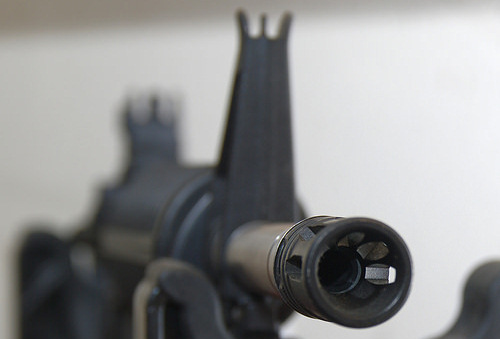 a time, when you bought an AR 15, you got one with a built in A2 style carrying handle with built in sights, and a matching front sight, just like the US Army used on their rifles, and you liked it. There were no other choices, other than a clunky scope mount designed to mount on top of the carrying handle. But, today’s rifles sometimes don’t even ship with sights at all, which leaves the consumer looking for the best iron sights for AR 15 rifles. There is a huge range of options, and we’ve pulled some of the best ones for you to look at.

These are the ones I use on my rifle, or rather just the rear since I already have a built in front sight. When looking for the best AR iron sights, this was a no brainer choice for me. Magpul is known for its reliability, superior design, and commitment to manufacturing excellence. This is a set for rifles that have no iron sights at all and flip down to allow the use of optics. Primarily intended as backups in case of optic failure, they are just as functional as primary sights if you choose to go that route.

How to Zero Magpul Back up Sights MBUS 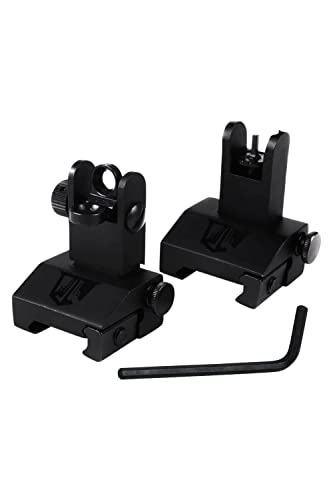 This is another great set for folks who need front and rear sights. Designed to mimic the sight profile of standard sights, these are the best AR15 iron sights for those who want the classic look and feel of A2 style irons without the large sight tower and carrying handle typically associated with these style of sights. Durable and windage and elevation adjustable, these are the sort of no nonsense irons that gain their utility and value through simplicity and affordable cost. If you need a solid, basic set of sights, this is an ideal choice for your rifle. 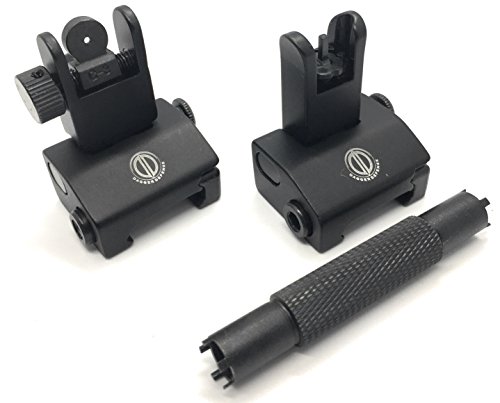 This one is for those folks who have lots of rails on their AR and want backup sights without having to remove the optics to use them. Designed to allow you to transition to iron sights by simply rotating the angle of your rifle, these 45 degree sights are the best iron sights for AR 15 rifles if you need to rapidly transition to irons. These sights are most commonly found on dedicated tactical rifles or those used in certain competitions where a scope is used for long distance shooting and irons for close in work. They’re also great to practice on in case of failure of an optic at critical times. This is an inexpensive bit of security. If your rifle can mount these, you should consider installing them.
Dagger Defense BUIS Unboxing/First Impressions 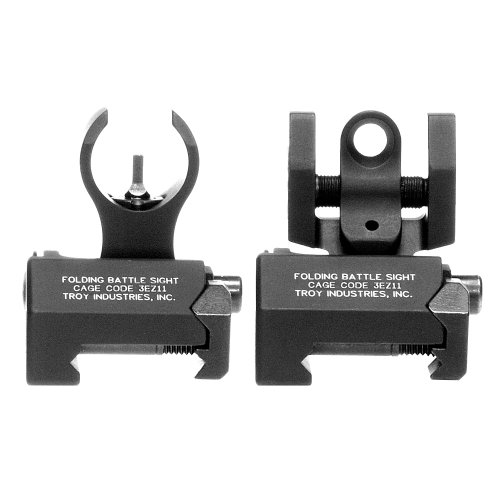 The Troy Micro HK Battle Sights take the HK style sights found on weapons like the MP5, the G3, and dozens more and allows you to toss them on an AR 15 style rifle. The Troy Micro HK Battle Sights feature both a wide rear sight and a minimal circular front sight. The combination of these two rear sights gives you both long and short-range options for your AR 15. They do fold down and out of the way, which allows for you to clear them for a clear sight picture.

The HK Micro Battle front sight also mimics the HK style front sight with the circular wings and thin front sight post. These all-metal folding sights are designed to last, and last they do. These are rock-solid, well-made sights that will get you on target and keep you there. These are a solid choice for the best AR 15 iron sights for the money.

What Makes the Best Iron Sights for AR 15 Rifles?

Many AR 15 rifles and even pistols these days are built with a so called “flatop” upper. Unlike the standard M2 upper that mimics the military M16 with its built in carrying handle and adjustable rear sight, the flatop has no sights at all but instead features a picatinny rail on which you can mount all manner of optics and sights. Some rifles will omit the front sight assembly, which also serves as a gas block, and instead just go with a gas block which also has a short section of picatinny rail on it. Other rifles still will have picatinny rail handguards that go the full length of the handguard, and can carry all manner of accessories.

The best AR15 iron sights for the money then depend on a number of factors. Do you have a front sight? If so, then you are just looking for a rear sight of some sort, maybe a flip up that you can fold out of the way when using optics, or perhaps a dedicated A2 style carrying handle. Or you may opt for a more advanced version of a standard rear sight, and put a nice adjustable unit back there.

If you are running a bunch of rails, and have optics installed, 45 degree offset sights are extremely popular. I had a chance to shoot a rifle with such offset sights on it recently, and thought at first they were just a solution in search of a problem. I soon found though they were nice to quickly transition between long range shots and short range shots at the range, which I learned was also the main reason people use them. In certain competitions, you have to take shots at a number of distances and at the fastest time possible. Use of these offset sights allows you to have a scope dialed in for distance, and then to quickly move to irons for short range shooting. Almost strictly a tool for competition shooting, these offset sights have an important place in the AR 15 world.

In a world full of high quality optics, many AR 15’s never have a single iron sight installed on them. But not everyone wants optics or may even have several different uppers for several different roles. Right now, I’m building a heavy barrel upper that will only have optics on it, while the upper I use now will be a strictly iron sight affair. The flatop upper allows you to play with different sight assemblies and even adjust their location to fit your needs perfectly, which is something more traditional uppers cannot offer. There are hundreds of AR iron sights to pick from, but only a few can be called the best AR 15 iron sight, and we hope you’ve found yours here.