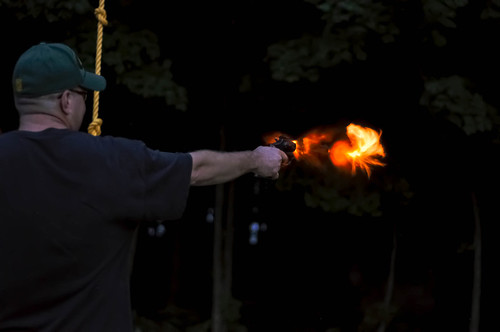 Photo by Sean / CC BY

selecting your home defense firearm, the first thing to think about is what caliber of ammunition you want to use. There are several options available for handguns, so how do you decide? Among the popular options are .357 Magnums and .38 Specials, which, interestingly enough, can be fired with the same gun in many cases. So, what’s the difference? And which one is better for home defense?

The main difference between .357’s and .38 Specials is the casing size (you can stuff more propellant into .357’s), which directly correlates to velocity and recoil. These two variables will determine the biggest differences between the two rounds. And the cost, though that’ll only matter to your pocket and not when someone is about to stick a knife into your midsection!

Ordinarily, you would be right. But consider the practicality of a higher velocity round in close quarters. Yes, we all want to stop an intruder in that scenario. But there is an inherent risk in using higher velocity ammunition that if you miss or if the bullet is powerful enough to pass through whatever it was fired into, you may do more damage than you wanted to. The .38 Special is more than powerful enough to stop an intruder, and the .357 is more likely to cause excessive and unintended damage.

There’s also the additional issue of ammunition—which, on the surface, favors the .357. Since .38 Specials are relatively low-speed rounds, when fired from short barrels, .38 self-defense hollowpoint rounds often won’t expand. This is why tons of professional gun instructors like Darryl Bolke prefer the humble 148-grain .38 Special wadcutter in their 2-inch CCW revolvers: they know any high-tech hollowpoint is dead on arrival in the expansion department so they opt for penetration instead.

The .357 Magnum, however, doesn’t have this problem. If you hit someone center-mass with a .357 Magnum, your hollowpoint will expand—and the evildoer likely will go down. The .357’s supersonic speeds almost guarantee expansion in hollowpoints. However, that speed comes with a catch . . .

We should consider the recoil from a firearm in the same vein as the velocity. Every force produces an equal and opposite force, and bullets are no exception. So, in the case of a .357, your higher velocity comes from a much larger explosion (go to the gun range and shoot both and you’ll see), which results in both a greater recoil on the person firing the gun (there’s a quick physics lesson you probably weren’t expecting) and a bright fireball that could temporarily blind you. The bang—for lack of a better word—will be much louder (in fact, .357’s will cause permanent ear damage if they’re fired in a confined space with no ear protection).

Besides, no matter how talented of a marksperson you are, the recoil from firing a round does have some effect on your aim. Anyone with experience firing handguns can attest to how much more difficult it is to maintain accuracy with a handgun over a rifle even in calm conditions and having a greater kickback from ammunition that’s more powerful than necessary won’t help matters (again, remember the humble .38 wadcutter). This is especially relevant if you’re a smaller or less physically strong person (or have members of your household that fit into those categories that may also need to use the firearm): recoil is definitely something to take into consideration.

If all you plan on using that particular handgun and ammunition combination for is home defense, this may not impact you as much as if you’re also firing this gun for recreation as well, where you’re burning a lot more ammunition a lot more quickly (but, if you’re going to use a gun for self defense, you’d best practice with it!). Still, ammo price and availability are things to consider, especially when the country does through the occasional ammunition shortage . . . like now!

Of course, it’s always a good idea to keep a spare box of ammunition somewhere safe, especially if you have a preference on the brand or type of bullet you use. But just in case, .38 Specials are easier to acquire and a lot less expensive in many cases. They also have more variety like the .38 Special wadcutters that tons of people (including me) are infatuated with (no expansion at all but boy, do they penetrate!—and with such light recoil).

At the end of the day, though, remember that both .38 Specials and .357’s are high-powered rounds and require a little more caution when being used indoors. While using .38 Specials over .357’s reduces your risk for additional property damage, it does not eliminate it. The .38 Special is still a decently well-powered round with great stopping power (anyone see the autopsy report of Lee Harvey Oswald when shot by Jack Ruby? He used the oldest of the old-school rounds—a .38 Special 158-grain roundnose—and he destroyed half of Oswald’s organs). This power, of course, will exceed the stopping power of your drywall.

Just be careful and understand what you’re working with before you have to fire in a high-pressure environment. Take the .38 Specials out to the range once and get used to how it feels to shoot one and take note of how your target looks after you’ve shot off a few rounds. If you’re new to .38 Specials, that will be a huge help to you so you can understand the tool you’re working with. Leave the .357 when you go hiking and might encounter a brown bear.

Finally, if you’re still on the fence about which caliber to use, consider purchasing a firearm that can shoot both rounds. Revolvers chambered in .357’s are great for shoot guns in the desert right after sunset—shooting .357 Magnums are like using a hand cannon—then you can stuff your revolver cylinder with .38 Specials for home defense. It’s easy to have the best of both worlds if you’re looking for a range and home defense firearm rolled into one—or, like mentioned earlier, a great backpacking gun for when you’re out in the woods and encounter bigger problems than a two-legged evildoer.