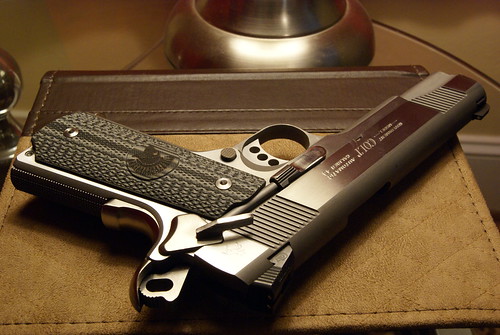 have two handguns and want to keep one in your truck and the other on your nightstand, or maybe you shot a couple of your buddies’ pistols and are now in the market for a new home defense weapon. Let’s say you’ve narrowed the search down between a .40 and .45 caliber semi-automatic. Which is better for home defense?

While the answer is never going to be clear cut one way or another, here are some things to consider before placing your order or stashing your guns for quick access. The main items to consider when comparing .40 and .45 caliber firearms for home defense purposes are safety, capacity, and power. 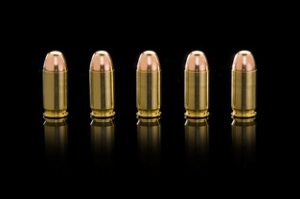 With a comparison of any home defense weapons, the conversation around hollow points is bound to come up. First and foremost, this topic is a major safety concern for anyone with children or other family members in the house, and for anyone who lives in an apartment, duplex, or any type of multi-family home. Regardless of your intent or aim when firing your weapon, the projectile that comes out of the end of the barrel is your responsibility. This can mean civil responsibilities for property damage, or even worse, accountability for injuries and the lives of people that may be in the line of fire.

Hollow points are usually touted as a self-defense round, but there’s usually not much of an explanation around why. The primary thought behind using hollow points is “knock-down power.” However, in reality, a hollow point does not affect the power of the ammunition at all. “Knock-down power” really has more to do with incapacitation, which we will discuss more later. The critical characteristic of hollow points is nothing more than having a purposely indexed and scored projectile with a hollow cavity on the leading end. The purpose of this is to cause the bullet to fragment along the front edge as the hollow “point” interacts through wind resistance causing it to become a larger projectile than a full metal jacket (FMJ) or target round would once fired. The result of how a hollow point reacts when fired creates two main advantages to using it as a home defense round. The first advantage, in which was mentioned before and will be addressed in a later section, is incapacitation, or what is commonly referred to as “knock-down power.” The second advantage to hollow points for home defense is that they are less likely to breech walls or penetrate beyond the intended target. As previously mentioned, this can be extremely important given your personal scenario when defending your home with other occupants present. 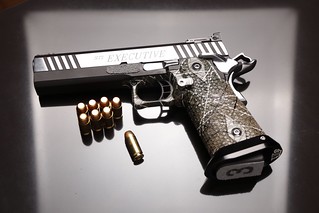 All things equal using standard grain size projectiles with factory pressure loaded hollow points, there are still going to be some differences between a .40 and .45 pistol when considering one for home defense. When comparing the two for “travel after penetration,” the .45 is going to be the slightly safer option for two reasons. The larger projectile size is going to incur greater resistance after making contact which in turn will slow down the speed of the bullet if it were to penetrate beyond the intended target. The .45 is also a lower pressure round than the .40 caliber which fires at about a 60% higher pressure than the .45. Putting that much more pressure behind a smaller projectile increases the likelihood that the bullet could travel further than intended. However, this is not the only factor to consider as a .40 caliber handgun is still a prime option for home defense.

If you’re completely sold on opting for the .45 as your home defense weapon, don’t run off just yet. We haven’t talked about comfort or control. Without pause, most anyone can identify that the .45 is going to be the larger of the two pistols. While that translates to more stability for some shooters, this may not be the case for smaller frame guys or women who plan to defend their home. For some, a .40 caliber may fit the bill when it comes to comfort and maneuverability, but there’s still more. The .45 caliber’s larger mass coupled with a lower firing pressure also means that the recoil is dampened as compared to the .40. This can lead to increased accuracy and quicker “next target acquisition” for the .45, but it can come at the tradeoff of comfort in hand. All of these factors make it extremely important for you to feel and shoot a home defense handgun prior to making a decision on using it for protection.

Another major concern when it comes to home defense talk, capacity is high on the list. Many shooters would prefer to have as many rounds as possible, while others take whatever advantage they perceive as a tradeoff and plan to make their rounds “count.”

In most every situation, the .40 caliber is going to be top dog in capacity. Smaller ammunition and double stacked clips, many .40 caliber pistols can carry 12-14 rounds vs 6-8 rounds in a .45 caliber single-stack configuration. There are always options for extended magazines that will up your round count for either firearm, but keep in mind that maneuverability may be impaired with the extra mass sticking out below your grip.

As discussed earlier, when people talk about power in association with ammunition or comparison of self-defense weapons, it usually means “knock-down power,” not some calculation about velocity and joules of energy. Sometimes this can also be called “stopping power,” but it all comes down to the capability to incapacitate an assailant. With the .45 being larger in size, it’s obviously going to take a larger chunk out of a villain which equates to maximum “knock-down power.” That being said, a .40 caliber loaded with hollow points is still quite capable as a home defense weapon and no amount of ammunition mass can offset the effectiveness of a well-placed round.

And in all honesty, with the proper .40 or .45 hollowpoint, you’re bound to incapacitate a villain if you hit him (or her) in the right place.

In summary, home defense is a very important role for a handgun, and there are many options that can provide the protection you need. At the same time, understanding the tradeoffs between using a .40 vs a .45 caliber pistol for home defense can mean valuable seconds when you need it most. While either option is an acceptable choice, your situation, build, and experience level should be what directs you to the correct choice for your home. Personally, I’d go for whatever bullet is more easily available at the time and what platform you prefer your semi-auto (for example, if like the 1911, you’ll definitely sticking with the .45 ACP).