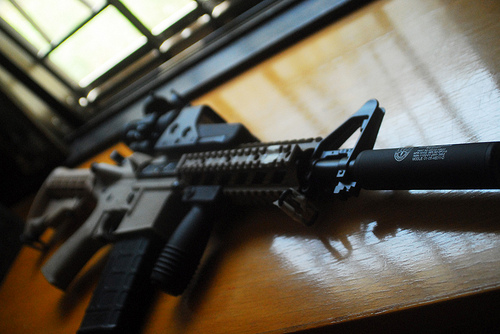 Photo by Timothy T. / CC BY

optics are a booming business. Since the War on Terror has started, we’ve seen simple red dot optics shrink in size but dominate in market potential. “Red dot scope” is a term that describes a wide variety of different optics and is somewhat generic. These optics have a variety of styles and include reflex sights, tube red dots, and holographic red dots. These optics are relatively simple and designed to be used at close range. Their method of use is simple: put the dot on the target and pull the trigger. Red dot optics make engagements faster and easier than lining up traditional iron sights and are much easier when engaging moving targets.

The two big names in red dot design are Aimpoint and EOTech, and folks often wonder which would come out on top in a war of Aimpoint vs. Eotech. Aimpoint’s optic tend to be the more traditional red dot and a tube design that resembles most scopes. The EOTech is known as a holographic red dot. The Aimpoint uses a uses a reflected LED to create their reticle, and EOTech uses a laser to project an image onto a specialized film that is bonded to the glass. The Aimpoint and EOTech have both been adopted by the United States Military, the Aimpoint serving most famously with the U.S. Army and the EOTech being a favorite of Marine Special Forces.

What they Have in Common

You can put these two optics against each other without at first acknowledging what they have in common. First off, both optics are 1x magnification, a necessary feature for a red dot optic. Next, most models are compatible with night vision optics and magnifiers and are adjustable for different brightness levels. Both optics are parallax free, which means the reticle remains in position regardless of where you move your head. Both optics can be used on rifles, shotguns, carbines, and even sub machine guns. The smaller options both companies offer (IE Aimpoint Micro H-1 and EOTech XPS2 and 3) can be fitted and used on large handguns. Of course, both optics excel at close range combat. 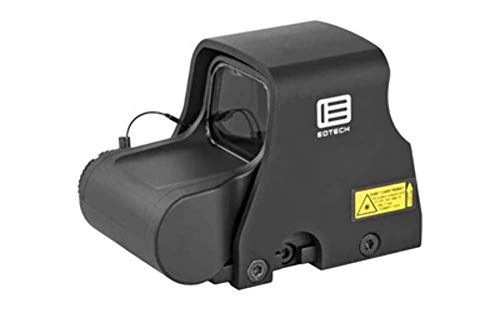 Regardless of the Aimpoint optic used, the Aimpoint brand always destroys EOTech in battery life. Let’s take the Aimpoint Comp M4s and the EOTech 512 for example as they are both the full sized red dot optics and completely comparable. The Comp M4S uses a single AA battery and lasts for a stunning 80,000 hours. That’s 8 years, folks! The EOTech 512 uses two AA batteries and lasts 1,000 continuous hours with lithium batteries. Now, 1,000 hours are impressive sure, but compared to 80,000, it’s nothing.

The reason being is that the simple reflected LED makes literally a simple red dot as your reticle. The EoTech’s use of a more complicated reticle and the laser drains batteries a lot faster. But again, 1,000 hours means 41 days, which is still impressive. When it comes to battery life, the battle of Eotech vs. Aimpoint has an obvious winner: AIMPOINT

Speaking of reticles we can go ahead and address that here.

Again the Aimpoint uses a small red dot. The reticle is simple, easy to use, and eye-catching.

The EOTech, however, uses something more complicated one. EOTech as a company offers several different reticles, but the most common is the “circle and dot”:

The circle portion is a 68 MOA circle with four stadius points on the top and bottom and left and right side. The circle is used for very close range, like room to room distance. The shooter fills the circle with the target and fires.

The dot placed in the middle represents 50 to 200 yards, the dot is 1 MOA, and since it’s a laser that is very refined with zero wash around it. This dot is pre set for a 62 grain .223 round. The bottom stadia mark is an aiming point for 7 yards. When comparing brightness levels the EOTech is much brighter; in fact, on its highest setting, it’s downright painful.

So, going back to Aimpoint vs. Eotech, when it comes to reticles, the EOTech is better in my opinion. It’s much more versatile, and the cleaner laser dot is more precise for long range shots.

The EOTech reticle will also blink for five seconds if the battery level is below 20%. I don’t consider this really an advantage over the Aimpoint since the battery lasts 8 freaking years so a low battery isn’t something to worry about too often. 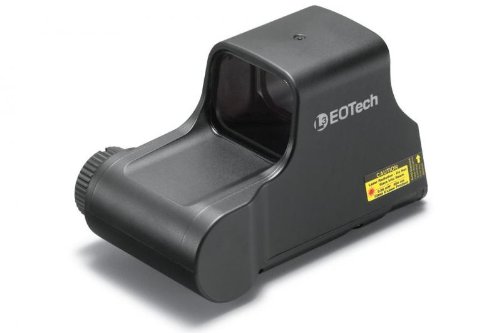 Durability — WINNER: Aimpoint (by a hair)

Both the Aimpoint and EOTech are known for being extremely tough. They are both used extensively by the military in some of the worst places in the world. Neither of these optics is a dainty flower that you have to baby. The Aimpoint is submersible to a remarkable 135 feet, and the EOTech is submersible to only 10 feet. This probably isn’t a major issue for most people, but it’s something to consider.

Both red dot optics are mil spec and can easily last as long as the rifle can. So, Eotech vs. Aimpoint, the Aimpoint has a hair over the EOTech durability-wise due to both how deep it can it sink, and the overall circular construction displaces forces more evenly over the surface of the optic.

This is hard to call on either optic since most optics from both companies have a similar controls on most every model. There is some difference of controls with more compact models, but, for the most part, the design is the same of the majority of optics.

The Aimpoint Comp M4, for example, uses a single dial on the rear of the optic. The Comp M4 has this dial on the top of the optic, on the right-hand side. On the Comp M4s, this dial is moved to the bottom of the optic, on the right-hand side. The dial is rotated to turn the optic on and rotated to increase the brightness. The dial does need to be turned past the first seven night vision settings to get to the daytime settings. This can be done rapidly, but when moving the dial rapidly it’s easy to skip a specific setting. This probably isn’t an issue for most, since the batteries last eight years. The only issue I have is the controls are not ambidextrous and can be difficult for left-hand users to access, especially when looking through the optic and wearing a helmet.

The Eotech 512 has three buttons mounted on the rear of the optic. The controls are placed just below the viewing window and are completely ambidextrous. The three buttons are an up arrow, a down arrow, and an NV button. The NV button, of course, switches the reticle’s brightness level to be compatible with night vision. The up and down buttons control the intensity of the reticle’s brightness level. Either the up or down button will turn the optic on at level 12.

The Aimpoint is simple and easy, but the EOTech is ambidextrous and very easy to use. This is somewhat of a toss, but I prefer the EOTech personally.

This is where it comes down to the wire. Which optic is more usable? The Aimpoint’s simplistic red dot means instant gratification, put the dot on target, pull the trigger, so easy a caveman can do it. The Aimpoint, however, is limited in precision and range. The messy dot makes shots past 200 yards somewhat difficult, but skill is more important than what the optic does.

The more refined, cleaner and smaller dot the EOTech offers is much easier to use for precision shots at longer distances. Again skill is more necessary that the actual optic. The EOTech offers more versatility with its more complicated reticle. The EOTech tends to be faster on target and easier to use in diverse environments. The Aimpoint’s red dot is eye-catching, but can be lost against certain backgrounds. Both optics due to co-witness with standard AR iron sights, which allows the rifle to be easily aimed if the reticle dies.

The EoTech’s open design is also less bulky and disappears when the shooter’s eyes are opened. With both eyes opened the optic effectively disappears and becomes a red reticle on target. So . . . Aimpoint vs. Eotech in usuability . . . I’ll give the advantage to EOTech from personal preference.

Both optics can use 3x magnifiers extending the effective range of the red dot. These optics are also compatible with most night vision devices; however, some models like the XPS2 are not night vision compatible. 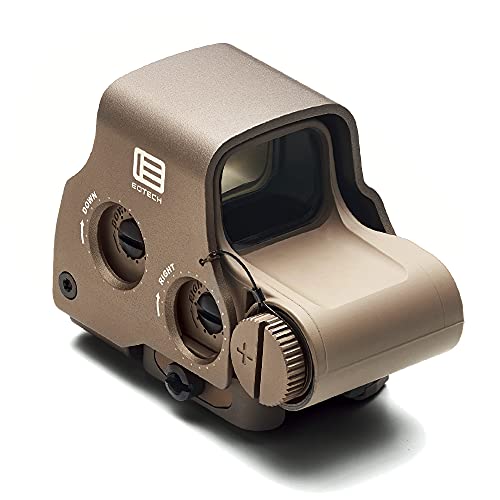 
This is probably the most important category to a lot of people. Budget is always important. On average, the EOTech is cheaper than the Aimpoint (check current prices, though, since there are price fluctuations). For example, the Model 512 can usually be had for less than the Comp M4s. Aimpoint has produced a budget model known as the Aimpoint Pro, but lacks a lot of the bells and whistles the standard Aimpoint offers. However, the Aimpoint Pro is still an excellent choice for a red dot optic.

Both the Aimpoint and the EOTech brand of optics produce some of the best optics in the world. Both the Aimpoint and EOTech are used by both militaries and police forces worldwide. These optics have a long history of being tough, dependable and accurate. Regardless of which one you select you should know you are getting a quality optic. When it comes to Aimpoint vs. Eotech . . . really, both are excellent!