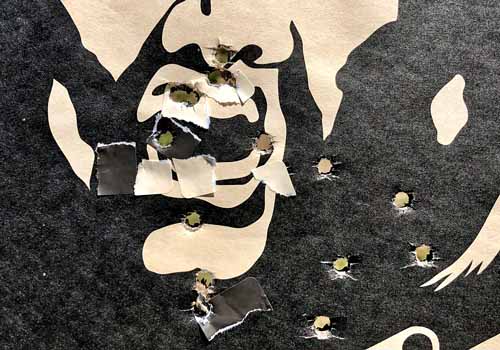 Photo by antefixus21 / CC BY

revolvers. Just like them. The romance of them and the history of them. Wyatt Earp used a revolver and so did Doc Holliday, as did Dirty Harry during the heyday of the 1970s (yes, I know the latter wasn’t real but Clint Eastwood most certainly was, and he used a revolver too). I love revolvers so much—wheelguns, six-shooters, whatever you want to call them—I even made an infographic about them. I need not go into all the elements that make revolvers such wonderful weapons here, but I will touch on one. More than a lot of things, it’s the revolver’s ability to take wadcutters that make them special in my eyes. 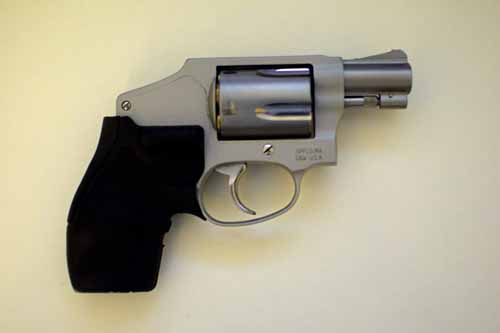 This is my EDC gun, and its weight—maybe over 14 ounces—is one of the primary reasons for carrying it. This light weight made me carry Federal Gold Medal 148-grain wadcutters due to their light recoil. Shootability—ability to hit targets—is of paramount importance, and there are no bullets in .38 Special as low-recoil as these Federal wadcutters.

Of course, the 642 isn’t my only revolver.  This is my Ruger SP101 that I keep in a biometric safe in my home office: 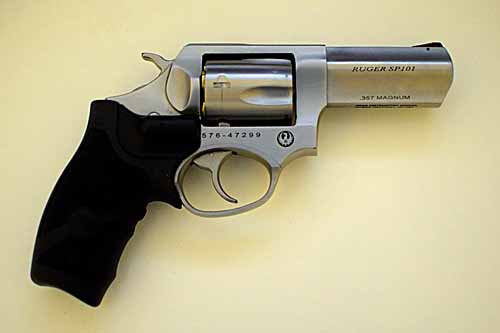 Isn’t she a beaut? It weighs like a brick—27 ounces of stainless-steel magnificence. I’ve shot full-powered .357 Magnums from it, and the controllability still ain’t bad. I load the same Federal 148-grain wadcutters in it for self-defense as I do the lightweight 642. Again, shootability is the most important consideration in my self-defense ammo.

Finally, we have the granddaddy of them all—my six-inch Ruger GP100 that I keep in another biometric safe under the bed in my bedroom: 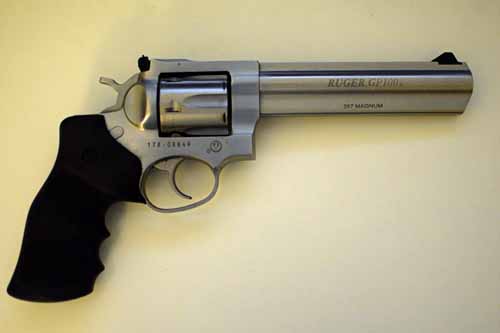 It weighs almost 3 pounds, and although I have fired . . . well, you know where we’re going with this. I load it with the same Federal 148-grain wadcutters I use in my two other revolvers. Again, shootability.

Because the bottom line with bullets, if you can’t hit your target, it doesn’t matter how powerful it is. Out of my S&W 642, the bullets remain controllable to a degree that not even normal target ammo are. Out of the SP101 and GP100, the wadcutters approach what a .22LR feels out of my all-steel Ruger Mark III pistol—the recoil negligible to a degree of a laser out of a Storm Trooper’s phaser.

So . . . the ability to aim then shoot the target with the first and, more importantly, the second and third shots is my first and second and third consideration in my self-defense ammo choice. In other words, I’d rather score a hit with a .22LR on some psycho breaking into my house than miss him with a .500 Magnum. You know what I mean?

Now, the naysayers are going to say: Wadcutters aren’t enough to stop a man! Really? First of all, the idea of you blowing away some guy, where his feet leave the air as if he’d swallowed a haymaker from Brad Pitt in a movie—you know that’s nonsense, right? Handgun rounds aren’t 12-gauge shotgun loads. You got to hit vital organs to stop the threat, and besides shootability (which we touched on already), penetration is the second most important factor.

And penetration is where the wadcutters shine, easily going 12+ inches in ballistic gelatin. I mean, the evidence is overwhelming:

And see here. And here.  And here again. If I keep on linking case studies with wadcutters getting enough penetration to hit vital organs, I’ll see like I’m copying-and-posting the word “here” with links forever. Again, you get the idea.

Then there’s the anecdotal evidence. Since the .38 Special has been the primary handgun for both good guys and bad guys for much of 20th-century America, there are just countless stories of its effectiveness. Folks weren’t shooting the latest Hydra-Shok hollowpoints back in 1950, OK? They were shooting roundnose lead bullets, and outside of competition matches, that’s all they were shooting. Roundnose lead bullets that were inferior to the wadcutter in shooting power. Yet, they—or actually, ONE bullet—stopped Lee Harvey Oswald cold. Have you seen his autopsy record? Jack Ruby’s 158-grain .38 Special roundnose wiped out just about every single organ inside Oswald’s torso, and the guy dropped like a stone the second he was shot. This is the power of humble lead bullets if properly placed.

Finally, there’s an often overlooked aspect of the wadcutter: its reliability in revolvers. Again, anyone who has any experience with semi-autos and revolves and who is unbiased will know the latter are more reliable than the former, including Glocks. Again, I bring up my infographic, and I don’t need to go into everything else either. Just look at one limp-wristing video on Glocks and you should see what’s right in front of your nose.

However, the revolver does have ONE issue that could make it inoperable: jumping the crimp. This is when the bullet is pushed out of its shell casing by the recoil of the gun blast, which, if wedged between the cylinder and the back of the barrel, will make your revolver inoperable.

Crimp Jump/Bullet Creep: What is it? Should I worry?

And here, the wadcutter shines again. Look at the Federal wadcutters I keep in all my revolvers. Notice something? 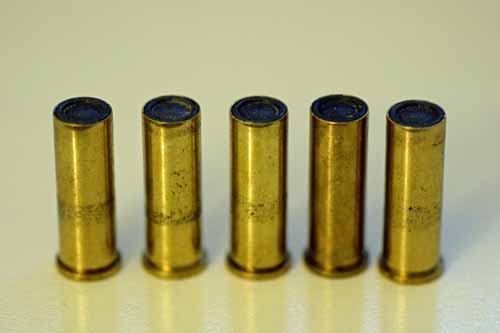 Yes, none of the bullets protrude out of the brass shell casing. Now compare it with a standard hollowpoint (or any other “normal” bullet): 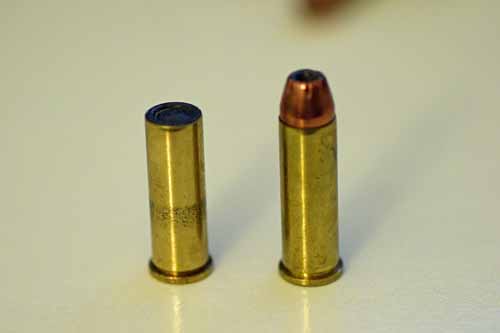 If the bullet protrudes out of the brass, which of these two bullets do you think will creep out of the confines of the cylinder and make the cylinder unable to rotate and therefore your gun inoperable? It should be obvious. And something else: I’ve never heard of a wadcutter ever jumping the crimp before. This video should give you a visual representation of what I just wrote:

In other words, unless the revolver is mechanically flawed, if you have 6 bullets loaded, if you pull your six times, you will have 6 bangs guaranteed. Can the same said for a semi-auto? Remember: it’s not the number of bullets a gun holds that’s most important; it’s the number of bullets that leave the gun when you want them to! And leave them in a way that allows the best aiming and followup shots. This is why I use a revolver. And this is why I shoot wadcutters.