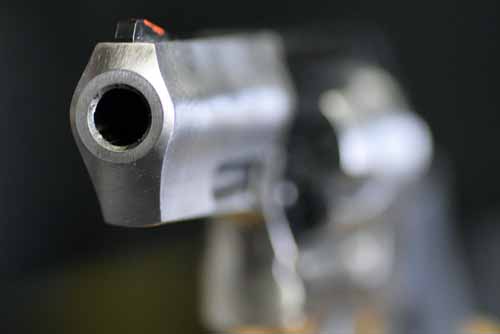 Photo by /Gregory Skylar CC BY

saying often goes, revolvers might seem antiquated in the 21st century but they pack a lot of advantages that folks, bedazzled by plastic Austrian semi-autos, might overlook. Plenty of people online have gone into greater detail about these, whether on Youtube (check out Lucky Gunner’s excellent video on how revolvers make you a better shooter on semi-autos) or with infographics (by yours truly). However, I’d like to talk about one specific advantage that’s often missed: the revolver’s ability to minimize the greatest obstacle to new beginners’ shooting—the trigger flinch.

What is trigger flinch? It’s a (duh) flinch that is produced when you anticipate the bang of the bullet being set off when you pull the trigger. Almost all shooters experience this, though some people can control it better than others. Some never learn to conquer it at all. Unlike a shooter’s stance, it’s not something that you can quickly learn and reproduce with minimal intelligence. In fact, intelligence has nothing to do with it. It’s just a very human response to an explosion being set off not too far from your face.

You might be saying, “I don’t have that!” You don’t? How about this? Next time when you go to the gun range and shoot your gun at the paper target, do your groupings look like this? 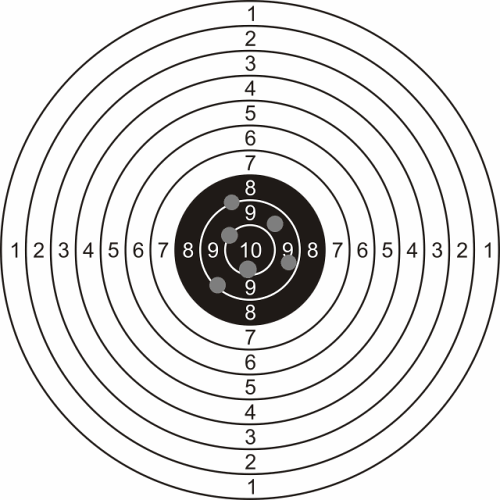 If so, you’re right: you don’t have it. You’re obviously a proficient shooter on the order of Mel Gibson in Lethal Weapon. But what if your groupings look like this? 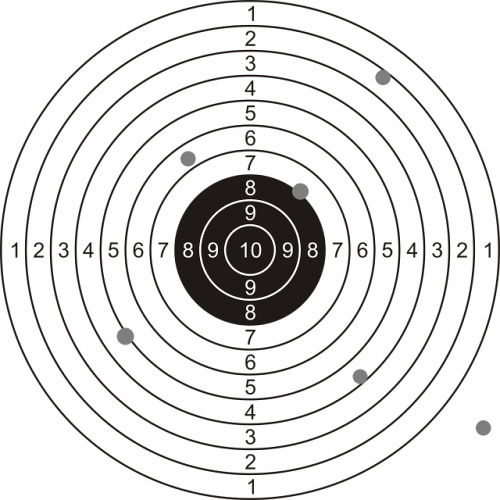 Guess what—you don’t have trigger flinch here either! But you still suck. Work on other aspects of your shooting game—sight alignment, controlled trigger pull, proper breathing, etc.—but your trigger flinch is probably not the main issue here. However, what if your groupings look like this? 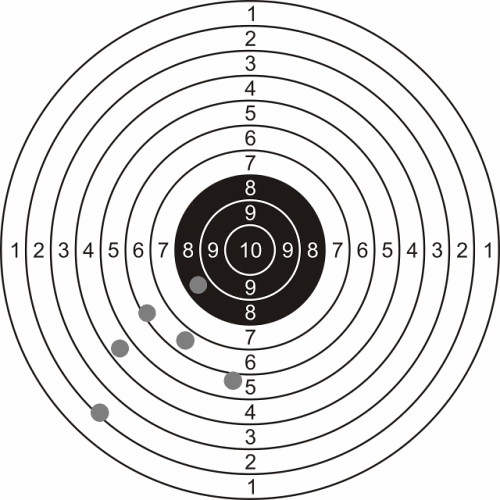 In this case, you definitely have trigger flinch. Why? Because people always involuntarily jerk their barrels to the left and down when they trigger-flinch. No, it’s not your sights being off. It’s completely trigger flinch. And it’s not something you can intellectually force yourself not to do. You can no more control this than the flinch you’ll instinctively produce if you open the bathroom door and see your mother-in-law naked (or father-in-law—let’s not get too sexist here).

So how do you control this trigger flinch? Easy: by dry-firing a lot. But I’m too lazy to dry-fire when watching TV or cooking dinner or miniature-golfing or wherever. (Dry-firing can become a dangerous obsession, and if you’re not careful, you could end up like Travis Bickle.) But you can do something else far enjoyable: shooting randomly placed live rounds and blank rounds (a snap cap, if you will). This is the method I prefer.

How this is done is easy. When you shoot, you don’t know whether or not the gun you’re holding is loaded with a live round or a blank. Therefore, when you pull the trigger and there’s a blank, you will very definitely SEE your flinch since your barrel will move in anticipation of the explosion. Your task from now is to MAKE THE BARREL NOT JUMP when you pull the trigger. This requires immense concentration and relaxation—and, ideally, a revolver.

Why is this? Simple: it’s much, much easier to randomly space blanks and live rounds in a revolver cylinder than a semi-auto’s magazine. To do a semi-auto, you need to do this: have a mix of live and blank rounds in front of you, move your eyes away from the magazine, and then using your hands only feed the rounds into the magazine. Needless to say, this is not ideal. Both because 1) you will likely remember which rounds went where and 2) once it lands on a blank round and the gun doesn’t go off, you have to rack back the slide, eject the bullet, catch it in midair so it doesn’t fall on the ground at the gun range, etc., etc. I can go on but you get the point. With a semi-auto, practicing this method is a major pain in the hindquarters.

Not so with the revolver. Here, the cylinder is loaded with live bullets and snap caps then you just look away from the cylinder, spin it, then once it’s stopped, close the cylinder into the gun. Now, you’re ready to practice this method. 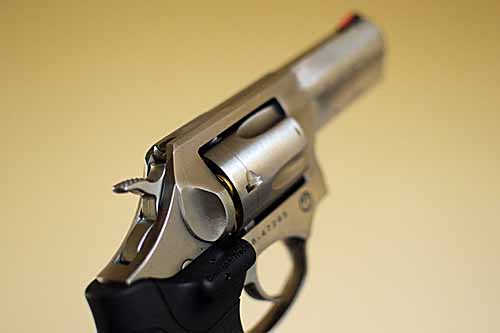 Here is my gorgeous Ruger SP101 with Crimson Trace Laser grips and a Wolff trigger spring upgrade (this description has nothing to do with the trigger flinch issue, but I thought I’d share). The SP101 holds 5 rounds, and is ideal for training for trigger flinch. Six-shooters or even 8- or 9-shooters are fine too, but I’d just demonstrate it with my nightstand gun (actually it’s in a biometric safe).

You can load the gun with as many live rounds you want. You can load it with 1 or 4 and just shoot it (remember, my gun is a 5-shooter). Here’s how you can load 4 live rounds (I know you don’t need a tutorial on this, but hey, I might as well be thorough). 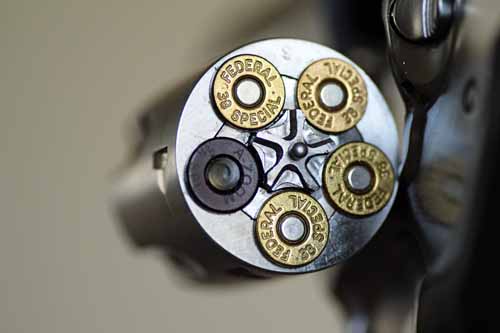 Shoot the gun single-action or double-action, makes no difference. The point is to control your trigger flinch. The barrel must NOT bounce when it hits a snap cap, and once it hits a live round, you can either continue or open your cylinder and replace the spent round with a new bullet. Rinse and repeat. If you do this awhile and you’re still flinching (i.e., the barrel is still bouncing when you pull the trigger), you might want to use fewer live rounds and more snap caps. Here’s how I would load 3 rounds: 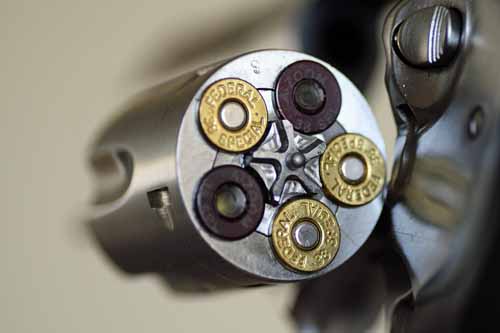 I generally do this so you’re not entirely sure where the second is even after you’ve shot the first one (i.e., is it the next one or the next next one?). If you do this a while and still find your barrel bobbing when you land on a snap cap, try it with 2 rounds: 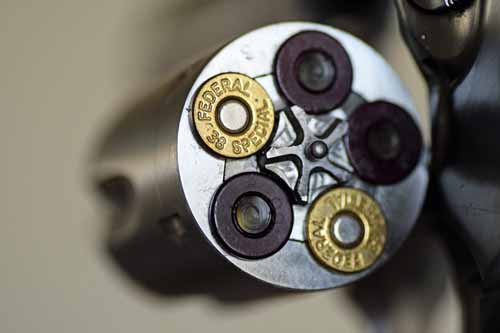 And finally, if the barrel still bounces, do it with only 1 round: Now, you theoretically have 4 snap caps to control your barrel shake. Control your breathing, don’t anticipate the shot, and let the trigger surprise you. Soon, you should see the barrel NOT moving when the hammer comes down, and this is the entire game to shooting well. Practice this method a few times a week or month (really depends on you) and you’ll be on your way to being a veritable Dirty Harry the second time he says, “Do you feel lucky, punk?” But again: you would need a REVOLVER to do this.  Good luck!