Photo by Bobby Bobby / CC BY

as dummy cartridges, snap caps are devices that are in the shape of a normal cartridge but that lack a primer, powder, or an actual bullet. They are perfect training tools for conducting reloading and malfunction drills, and for also testing whether you have a flinch when you pull the trigger. Snap caps are entirely safe to use and you can pull the trigger on your gun with snap caps loaded into it and the gun will not fire. It’s a far safer way for practicing certain gun drills versus using live ammunition.

In this article, we are going to cover 4 of the best snap caps for on the market and then dive into what to look for in buying snap caps because, even though you may not have known it, not all snap caps are the same. 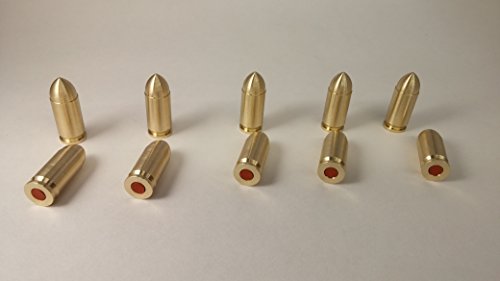 Manufactured out of Arizona, these .45 snap caps from Premium Brass are by far the most realistic looking snap caps on this list, to the point that at first glance you might mistake them for live ammunition! The reason why is because these caps are CNC machined out of a solid piece of brass, other than the pocket for the primers being filled up with silicone.

Since these snap caps have been constructed out of the same material as actual rounds, they will have a more extended life in comparison to other snap caps on the market. The silicone fake primers also puts less strain on your gun’s firing pin or striker when you pull the trigger. These are among the best .45 ACP snap caps for the money. 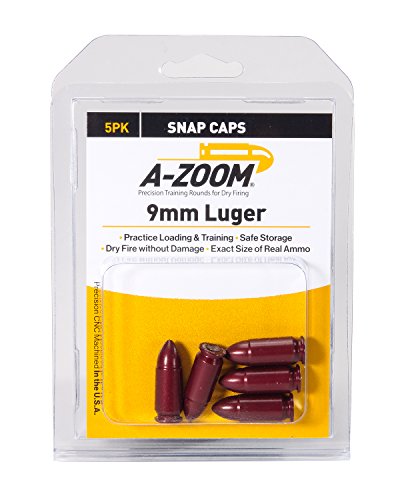 These A-Zoom Snap Caps, chambered for 9mm firearms, are constructed out of a solid piece of aluminum and then CNC machined to match the precise dimensions of the cartridge. To ensure that these snap caps will last you a long time through numerous training sessions, they have additionally been anodized with a hard coat finish, which also provides overall smooth functioning for your gun so you can easily feed and eject the rounds without hiccups.

Your only getting five snap caps instead of ten like with the KT Tacticals, but then again this pack costs less. Also, A-Zoom is a trusted brand when it comes to snap caps as they have been producing them since the turn of the millennium and have found favor with civilians as well as many military and law enforcement units across the world. Hands down, these are among the best snap caps for dry firing.

To properly train with .22 caliber weapons you must have a set of snap caps. When it comes to rimfire firearms snap caps are an absolute must have. Without quality snap caps the rimfire firing pins would easily break or be damaged after dry firing. The Tipton .22 rimfire Snap Caps are made from high impact polymer and are quite tough. They are a bright orange so you can immediately distinguish them from standard ammunition and safely train and practice. These small rounds will reliably cycle through a magazine without issue since they are built to the same dimensions as a .22 caliber round. They are also one of the most affordable options. They come in a variety of other calibers too (see them here). 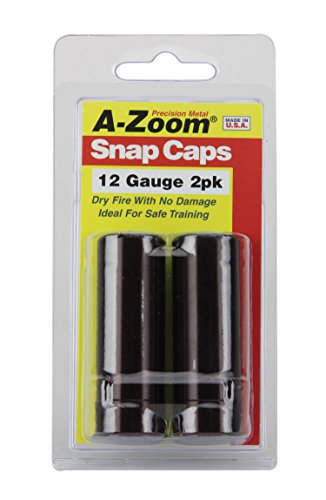 These snap caps are not made for a rifle or a handgun but rather for a shotgun. These are among the best 12 Gauge snap caps, which are made specifically for the purpose of dry firing and are not only machined to the exact same dimensions of a 12 Gauge shell but to the same weight as well. Not only does this make training with these rounds far more realistic, it also makes the rounds more durable and less likely to chip away like some other snap caps are. What’s even better, is that these training rounds are produced right here in the United States.

Regardless of how they are made, all snap caps serve the same purpose as training tools for individuals who want to practice their reloading and malfunction clearing skills without using live ammunition. Many experts recommend that you buy snap caps that are filled with a plastic-type material since it helps to better absorb the force from your gun’s firing pin and won’t damage any of the components. That’s why most of the snap caps that we selected here have a softer firing pin.

In addition, it’s important that your snap caps are constructed out of a strong enough material so that they will last a long time. Snap caps don’t exactly come cheap; per unit, a snap cap actually costs more than individual rounds of actual 9mm ammo. Aluminum, brass, and nickel are example of materials that come on snap caps and that will enable them to last a long time under the repeated strain of being fed into your weapon’s magazine, being fed into the chamber, and then being racked out of the slide.

Keep in mind that in order to simulate a malfunction, you’ll need to place a round sticking out of your gun’s ejection port, meaning the round will be under a lot of pressure between the slide and the barrel. An overall softer or weaker snap cap would not be the best choice for these kinds of simulations since it could weaken very easily under those simulations.

As a training tip when using the best snap caps, don’t forget to check if you accidentally jerk your gun or simulate recoil on your own when you pull the trigger (the dreaded trigger flinch that affects most shooters, whether beginner or experienced). Doing so will throw off your accuracy when you actually fire the gun with live ammunition, so make sure that your hand stays firm when you pull the trigger. You’ll find that this is one of the most beneficial training purposes of snap caps in the long run.