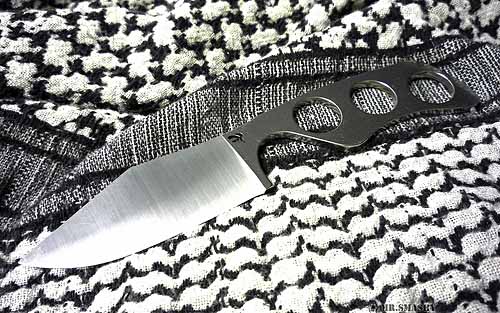 the neck knife originate? No one really knows, but it is known that it has been around for thousands of years all the way back to the first tribal people of Africa. Back then, neck knives were little more than a sharpened bone attached to a vine that was then set around the neck. Today, needless to say, neck knives are far more advanced with blades made out of titanium and steel and then attached to paracord.

Neck knives are awesome to have because they conceal very easily and can be accessed quickly in an emergency. Many people also like to wear neck knives as a backup to their primary knife. But your neck knife will only be useful to you if it’s high quality. Fortunately, each of these 4 products reviewed here qualify as the best neck knife—i.e., some of the most highly regarded models on the market and will each serve you well: 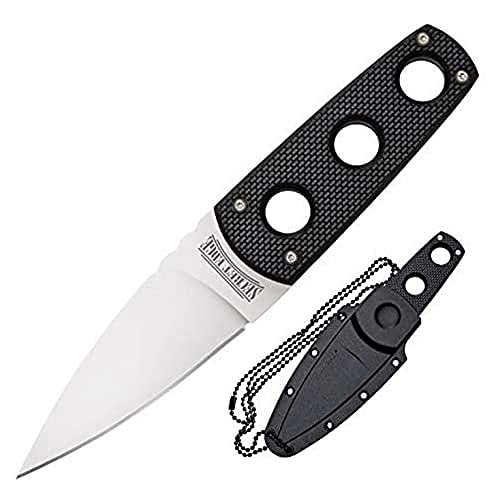 Cold Steel is a fairly big name in the knife world so it makes sense that they would enter the neck knives market. Their Secret Edge neck knife has been designed almost exclusively for concealment. It weighs just three ounces with a length of only three inches, and yet it’s constructed out of the finest Japanese AUS 8A steel. The grip is constructed out of G10, a high pressure composite consisting of plastic laminate, woven fiberglass, and an epoxy resin binder. It could be a great addition to any neck knife survival kit.
CS11SDT Cold Steel Secret Edge 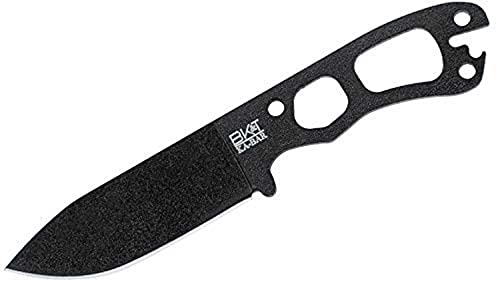 KA-BAR is another big name in the knife industry, considering that they produce the legendary USMC knife. However, their Becker Necker knife meets the same standards for quality that KA-BAR has set. This knife (see full specs) is constructed out of a 1095 Cro-Van steel with a skeletal handle and was specifically made for military and law enforcement units.

Since the handle is skeletal, you will be able to add a grip if you want to or you can just leave it as it is. It ships with a glass filled nylon sheath and is fully compatible with a TDI clip if you would rather wear this knife on your belt rather than around your neck. This is a great tactical neck knife. 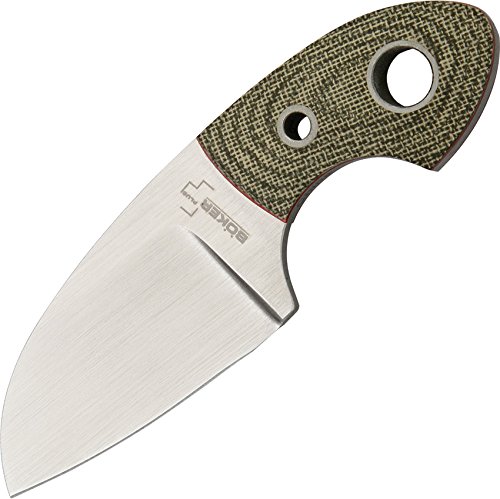 Last but not least, we have the Boker Plus Voxknives Gnome Knife. You will notice right away that this is the smallest knife on this list with an overall length of just four inches and therefore isn’t exactly well suited for those with large hands.

On the other side, this diminutive size means that this knife is perfectly suited for concealment and EDC purposes. The blade may be minuscule, but it’s also incredibly sharp and forged out of a 12C27 steel. A lanyard hole in the middle of the handle permits you to run a cord through this knife to wear it around your neck. This should on anyone’s list of the best neck knife. 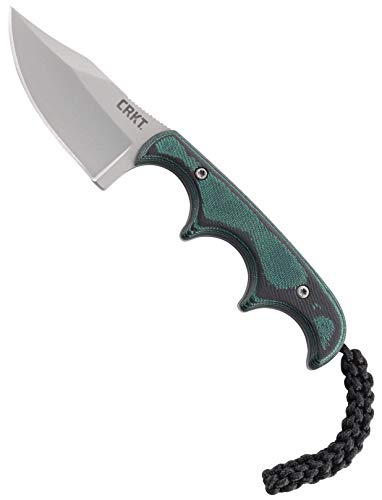 The bowie knife has a long history of combat use in the United States from its famous founder to its current incarnation and its inspiration to every combat knife produced after the Alamo. The CRKT Bowie Neck knife isn’t your typical bowie knife. It’s much smaller than a normal bowie knife.

The CRKT neck knife is inspired by the traditional bowie knife but is shrunk to be small enough to wear around the neck. The CRKT knife has a nice wide blade and it’s accompanied by a nice grip. The grip accommodates your hand well, and the 3 finger grooves ensures it stay put when used.

The knife comes with a holster and necklace for easy wear and carry. This mini bowie may not be as fearsome as a traditional bowie, but it’s got it where it counts. Hands down, this is one of the best neck knives period.

What Do You Need to Look For in a Neck Knife?

Many of the same principles for any other duty knife apply to a neck knife as well, meaning that the blade needs to be sharp and the grip needs to be comfortable. A neck knife may be smaller than other knives, but it will still be able to perform many of the same tasks especially in a survival situation where you can use it to clean game or aid in making tools out of natural materials.

The quality of the steel in your neck knife absolutely cannot be called into question. If your knife has a dull blade right out of the box or otherwise cannot hold a sharp edge for a long period of time, you should not consider the knife at all.

The grip of neck knives are obviously significantly smaller than other knives, but the grip still needs to be comfortable enough so that you don’t dislike holding the knife. An old saying is that your knife should feel like a natural extension of your hand, and your neck knife should be no different. Keep in mind that you’ll likely be putting your neck knife to the test in outdoor wilderness and camping situations as well, so you can’t afford to buy a knife that you don’t like to hold in your hand.

In addition, the quality of your knife’s sheath is also important. Keep in mind that since your knife is being wrapped around your neck, without the sheath your knife’s blade could scratch against your upper torso. If you fall or trip or anything along those lines, it could lead to a far more severe injury. That’s why a knife that doesn’t easily fall out of its sheath is one of the most critical features that you need to look for in your neck knife. Kydex is a good example of a suitable sheath for a neck knife because it not only easy retains the knife, but it won’t inhibit you when you draw the knife either.

The best neck knives will serve you well both in EDC and in bush craft purposes. It’s important that your knife meet the right combination of having a sharp and durable blade, a comfortable handle, and a sheath with plenty of retention. Each one of the four blades listed meets this criteria effortlessly and would be a great addition to any neck knife survival kit.