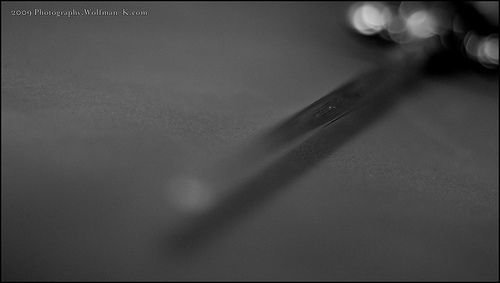 Photo by Wolfman K / CC BY

is a dagger-like knife that has a narrow, razor sharp blade with a point shaped like a needle. Since the blade is so narrow, the stiletto penetrates into flesh very deeply despite its relatively short length. More importantly, the stiletto is easily concealable due to its compact size and light weight.

The stiletto has historically been used as a stabbing weapon for hundreds of years due to its basic yet efficient design, and is not as well suited for slashing or cutting. During the Middle Ages, knights often carried stilettos as a back-up weapon in addition to their primary swords. The reason for this is because the stiletto’s narrow blade would easily fit through the chain mail or gaps in heavy armor to wound or kill an opponent. Stilettos continued to be used by the gangsters of the 1930s, 40s, and 50s; many switchblades produced then and now are in essence folding stilettos. And stilettos continue to be carried as concealable self-defense weapons today.

Here are 4 of the best stiletto knives you can buy: 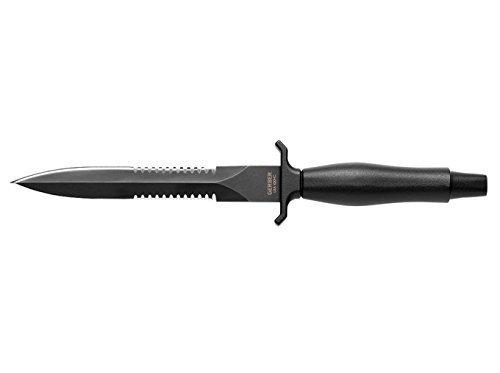 The Gerber Mark II is a very underrated combat knife, one that isn’t as well-known as it should be. The Gerber Mark II features an ultra-sharp stiletto blade with a serration on each side. This design makes the Mark II a fearsome and very capable knife. It’s brutally efficient and was well respected throughout Europe and Africa. The Mark II has a 6.5-inch long blade with an overall length of 12.75 inches. The Mark II is a piece of history, and for the first time in a long time, Gerber has re-introduced it to the American market. It’s a unique knife from a time where combat knives were standard and even used often in war. While that time has mostly passed, the Mark II as a fighting knife is still an excellent design. 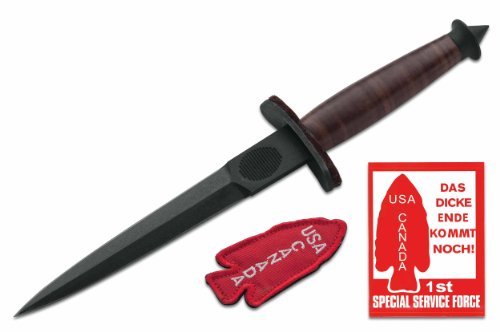 This is a fixed blade stiletto with a double edged, carbon steel blade that is coated in black. The handle is designed to handle abuse and made out of compressed leather discs. The original Devil’s Brigade Knife was produced in the middle of 1942, and back then was referred to as a V-42 combat knife. It was essentially a stiletto upgraded to meet the needs of the special forces of the United States Special forces, but it became legendary due to its efficiency on the battle field. The blade measures seven inches, longer for a stiletto, but the entire weight of the knife is still less than half a pound. The knife ships with a nice leather sheath.

If you are looking for an affordable Stiletto the Tac Force is for you. Priced perfectly for someone entering the market, the Tac Force stiletto comes in a variety of different finishes, but the one we reviewed is a basic black. The blade itself is made from surgical grade steel that is extremely hard and durable. The Tac Force is also corrosion and wear resistant. This Stiletto has a blade length of 3.25 inches, a closed length of 4.5, and a total open length of 7.75 inches.

The Tac Force Stiletto is an assisted opening knife, so be aware of your local and state laws before carrying it. The blade flies open, quick, and smooth, and in a hurry. Watch your fingers when using. The blade is nice and tight and superbly sturdy. It’s ready to go in a heart beat, and strong enough to withstand serious use. With you’re on a budget, this is without a doubt the best stiletto knife for the money.

The Schrade Viper 3 is an out the front knife but is not technically a switchblade. Instead of a spring-loaded blade, the Schrade Viper 3 uses a push-button lever at the base of the knife’s handle. Press it forward, and the blade springs into action. It opens fast and easy and delivers you a stunning stiletto blade. It’s quite sharp and features a serrated edge for cutting through thicker materials.

The Viper 3 has an aluminum handle topped with a glass breaking or impact weapon spike on the opposite end of the blade. The Viper 3 has a safety device to keep the knife from deploying in your pocket on accident. The Viper 3 has an included pocket clip for easy access and comfortable carry. This is an outstanding knife and a fun stiletto design that incorporates a quick-opening feature. Past that, this is hard to beat, especially when you consider the price tag. This is one of the best stiletto knives on the market.

With the exception of the fixed blade Devil’s Brigade knife we shared, the stilettos we’ve listed are classified as ‘automatic knives’ or switchblades rather than more traditional assisted opening knives. Switchblade or automatic knives are legal to own and carry in most states (although interstate commerce of them is still prohibited from a 1958 law), but they are not to be confused with assisted opening knives.

It’s important that you don’t mistake one for the other, since stilettos and assisted opening knives fulfill different niches. A switchblade or automatic knife is simply a knife where the blade springs out of the handle by the press of a button. Tension is put by a spring on the knife when it is closed. In contrast to this, an assisted opening knife can only be used by pushing the blade open with physical force, and nothing holds it down when it is closed.

All in all, the best stiletto knives fulfill a very unique niche and are suitable self-defense weapons that would go nicely with a concealed carry handgun as well.