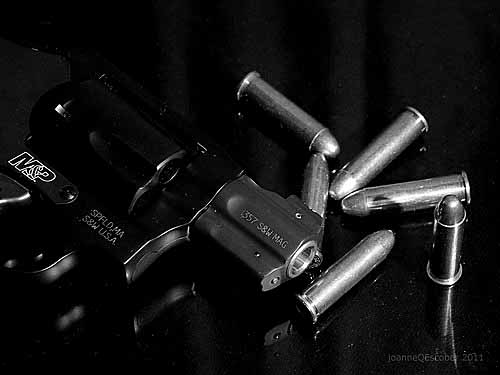 Photo by tacit requiem / CC BY

method for carrying concealed is pocket carry in my humble opinion. Why? Because it’s the fastest way to pull out your gun and hit the bad guy (or gal) where it makes a difference. For this exercise to work, however, you’d need the following:

1) A lightweight, hammerless revolver
2) A pocket holster
3) A laser sight

If you don’t have any of the above, stop right here and first buy them. Why? Because this method will work best—or even, ONLY work—if you’re carrying a lightweight, hammerless revolver with a laser sight. My particular model is a Smith & Wesson 642 Performance Center with a Crimson Trace grip laser.

Now, I know all the plastic fantastic fanboys will be demanding: Why not a semi-auto pistol?! Well, it’s because you’ll just run into three issues:

One, if you’re using a striker-fired pistol like the Glock or an M&P Shield, you’re contending with a very light trigger pull. You’re far more likely to shoot yourself in the leg, especially in the must-be-avoided-at-all-costs femoral artery, when pulling your gun out in a high-press situation.

Two, semi-autos often jam if you don’t grip them right (i.e., the dreaded limp-wristing).  Have you seen all those Youtube videos on Active Self Protection or Police Activity where the cop’s Glock or some other plastic fantastic jams in the middle of a gunfight? Sure, you have. Best avoid that.

Finally, three: the extended large grip of a revolver lends itself much, MUCH better to pocket carry than a semi-auto’s smaller grip that doesn’t even extend beyond the back of the slide. Lucky Gunner talks about this in an excellent video so check that out.

Now, the laser sight. I know, old-school gun guys (or gals) bellyache about the loss of training with the much-praised iron sights, but seriously, this is the 21st century, not the 19th. Yes, you should know how to use iron sights when shooting just like you should know how to drive manual even though most cars are automatic these days. But seriously, iron sights are not the quickest aiming devices in high-stress situations, especially when such situations occur in close range situations (within 21 feet). Now, in high-stress situations, you will default to pointing and shooting, and when that happens, do you think you’re more liable to hit your target where there’s a red dot ON the target or less likely? This is just basic logic here.

So, now that we’ve gotten those two caveats out of the way (get a lightweight hammerless revolver, get a laser sight), let’s talk about the advantages of this setup (before I forget, though, the pocket holster I use is a Safariland Model 25).

By far the most important advantage to this setup is speed. To fend off your attacker, you must follow these steps: One, reach for your gun; two, grab your gun; three, pull out your gun, and four, aim and fire.

With pocket carry, you will eliminate steps one and two and go directly to step three. If you’ve developed your situational awareness to a responsible degree, you should be able to sense when danger is coming, even if only for a few seconds. During that time, if you’re smart, you would’ve already would’ve had your hand inside your pocket and gripping your gun.

In other words, you just saved yourself those precious moments that you cannot save by having your gun on your belt OWB or IWB or appendix carry or whatever. You want to seem unarmed but ARE indeed armed. Sure you can pull out your gun beforehand with non-pocket carry, but then, you risk brandishing a gun (a crime in tons of jurisdictions), especially when the threat turns out to be NOT a threat. Are you really going to continuously pull your gun out at every sketchy-looking Dick or Jane? With pocket carry, however, you can have your gun ready at any threat or non-threat. You’re always ready to rock while staying perfectly within any realm of legality.

Now, let’s talk about step 4: aiming and firing your gun (step 3, pulling out your gun, remains the same no matter how you carry your gun—unless you have some telekinetic powers to move your gun without your hands doing the moving). Darryl Bolke, a great proponent of pocket carry, has demonstrated the ability to pull out your gun and shoot the bad guy in the head within a second. Check out his video; like observing two rabbits mating, you really need to slow down the video to appreciate the movement.

However, with a laser, you can pull out your gun and hit the bad guy if not in the head, at least in the torso area within a sub-HALF-second draw from your pocket. Try it: you’ll see it’s actually a very feasible movement when you have a laser sight. And, unless you’re some long-lost descendent of Wyatt Earp and Annie Oakley, it will only work if you have a laser sight.

By far, the most important aspect of pocket carry, again, is speed. A second advantage, however, is concealability. I live in a hot-weather state (before California and now Texas), and during the summers (hell, during MOST months), trying to conceal a gun even IWB when wearing just a T-shirt and shorts is damn near impossible without printing.

However, with pocket carry, as long as your shorts have pockets sufficiently large, you can stick a snubnose revolver and none will be the wiser. At the mall, at the beach, while walking around your neighborhood, whatever. If you think you’re printing even then, put a cell phone over the pocket holster. Unless the bad guy is a Kryptonian who has X-ray version, he won’t be able to tell you’re carrying a gun (and, in any case, if the bad guy is a Kryptonian, you’re out of luck even if you can fit a .50 BMG in your pants).

Besides speed and concealability, there are other advantages of carrying a revolver in your pocket. Or, I should say, having a revolver over a semi-auto. However, they’re too long a list to get into—and, in any case, I already have an infographic/article about those reasons. You can check it out, and you’ll save me having to regurgitate its points here.

But speed and concealability alone should make it obvious why this is arguably the best way to conceal carry if you’re a civilian who lives in a normal environment (if you’re a guy who lives in the seedy parts of Syria or Afghanistan, seek advice elsewhere).