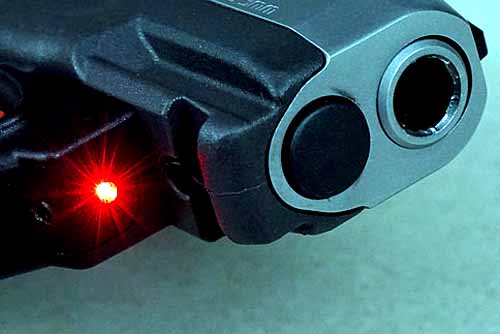 Photo by Pat WilsonCZ75 / CC BY

carry a handgun for self defense, you really should attach a laser to it. Yeah, I know tons of people clutch their pearls whenever anyone suggests any other way besides iron sights when aiming. But this isn’t the 19th century—and we don’t recommend lasers because it’s the 21st either. For example, we don’t recommend red dot sights (and we’ll go into why in this article too). So, let’s begin . . .

The most important consideration you need to be aware of is most self-defense shootings are 3 or fewer bullets fired at a target within 3 yards’ distance. Yes, this is a cliché, but just because it’s a cliché doesn’t mean it’s wrong. No, it’s very, very much right. Lucky Gunner has a pretty exhaustive video about the research behind this number—3 within 3 (with 3 seconds too)—so you might want to check it out:

The True Distance of a Typical Gunfight

Shootings that are BEYOND 3 bullets beyond 3 yards are almost always law enforcement situations. This prime difference shouldn’t need to be articulated, but we’ll do it anyway: in law enforcement, you’re heading TOWARD danger; in self-defense, you’re heading AWAY FROM danger. It doesn’t take Wyatt Earp to understand the former situation is far more risky and bullet-intensive than the latter. We’re not in this situation. We’re in the latter, self-defense situation, and 3 bullets within 3 yards with 3 seconds will be by far the most likely situation we’ll encounter. 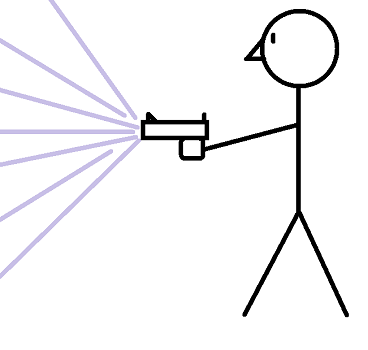 Now, this is the fast way. Pull on your gun from your holster, whatever that might be—appendix, pocket, IWB, OWB, whatever—and just start blasting. Like below:

No, the purple lines don’t depict the spread of some radical short-barreled laser shotgun; they depict all the trajectories your bullets can go when pointing and shooting. You can do this much faster than 3 seconds and you might get lucky—but far more like you won’t. Yes, your target will most likely be within 3 yards, but 3 yards are still just under 10 feet and at that distance, especially if you’re pumped on adrenaline, you can miss your target entirely. There has to be a better way, which leads us to the old-timers’ preferred method: lining up your iron sights. 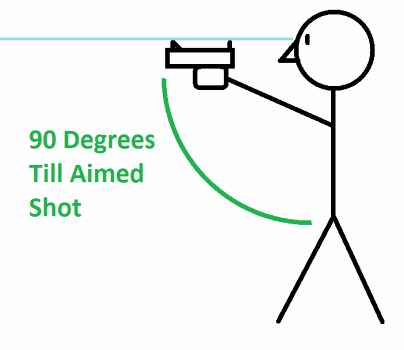 Now, with enough training, sure, you’ll be very, very good at this. Let’s even say you can shoot the wings off a fly at 100 yards. THAT’s how good you are. The problem, however, even if you’re Annie Oakley and Jerry Miculek’s progeny, you still have to ALIGN THOSE SIGHTS. And unless your eyes grow out of your stomach, you need to bring your gun up to your eyes, which are placed in front of your head. How long will that take? We don’t know, but we’re going to assume considerably longer than just pulling out your gun and start blasting as if your enemy were the size of a bar door. Once again, remember those 3 seconds of the average gun fight—what percentage of those 3 seconds will you need to properly aim your gun? 25%, 50%, 75, 100%?! Will you be shot before you can align those sights?

Worse, this is assuming there will be NO obstructions in that beautiful quarter circle of gun movement from your holster to your eyes like, say, a rapist’s arms or a mugger’s knife. (And this incidentally is why we don’t recommend red dot sights for concealed carry, self-defense. They do make it easier to aim at you target, but you still have to bring those darn things up your eyes!) Which brings us to our preferred method: the laser. Red, green, Crimson Trace, Lasermax, whatever. 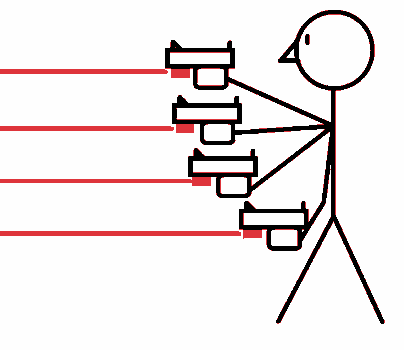 Notice—besides our amazing, Michelangelo-caliber drawing ability—the most important advantage of the laser: you DON’T need to bring the gun up to your eyes. You can pull out the gun from your waist-level holster, and if your grip can withstand the recoil, you can immediately aim and start shooting. At waist level, navel level, chest level, eye level, above your head level, whatever. IT DOESN’T MATTER.

Have obstructions? So what? A long as the obstruction isn’t preventing your trigger finger from pulling the trigger, you’re good to go. This ability will save you split-seconds of valuable time for you to aim and shoot your target center-mass. Yes, I know I wrote “split-seconds,” but split-seconds can make the difference between you being above ground or six feet under. Split-seconds can be just the time you need to win that average 3-second gunfight.

Bottom line: if you carry concealed, get a laser. Doesn’t matter if you’re a beginner or Rob Leatham. Get a laser. Good luck!