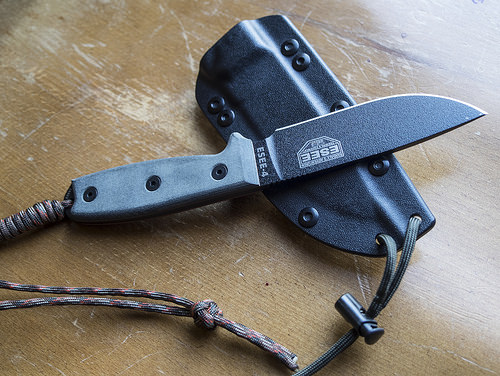 Photo by Patrick Breen / CC BY

knife was originally created by Jeff Randall, who was both a survivalist and an entrepreneur. From his experience, Randall knew what a good fixed blade wilderness survival knife needed, and the result is the Esee, which is equally at home with a cross-country backpacker as it is with a soldier or a law enforcement officer.

In this article, we will go over four of the best Esee knives on the market and, after our reviews, the qualities that make the Esee knife one of the best all around options there is for a fixed bladed knife as a whole. 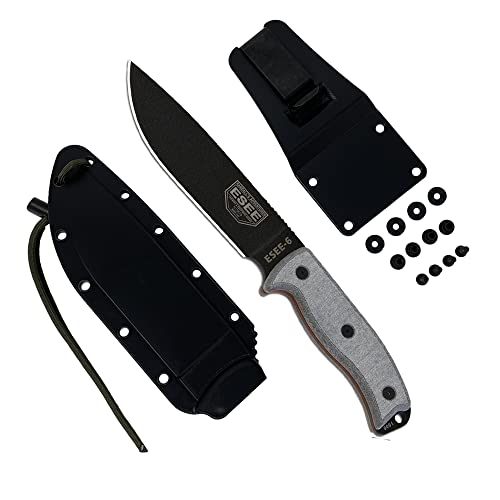 This is a full tang knife with a total length of eleven and three quarters inches. The blade and tang are built out of a black coated 1095 high carbon steel blade that takes up six and a half inches of the total length of the knife. To give you the tightest grip over the weapon possible, Esee has installed jimpling along the spine. The handle itself is constructed out of Grey Micarta scales, and features a lanyard hole with a pommel on the bottom. Last but not least, the 6P-B ships with a black polymer carry sheath that features a removable clip. 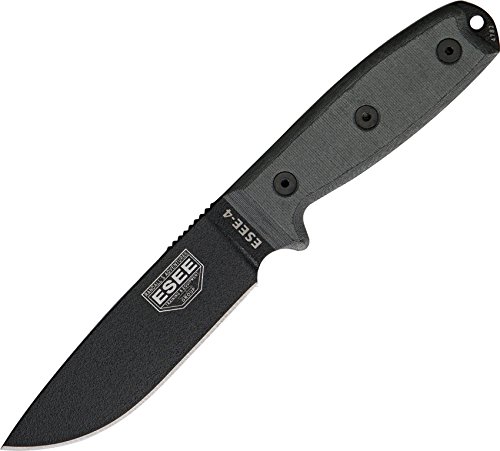 You’ll instantly be able to tell how strong and sturdy the Esee 4P Black Knife is when you hold it for the first time. The Micarta handle is known for being both extremely comfortable and durable, but it also aids in the overall lightness of the knife to make it a nicer blade to carry. This is something that many people who are wondering about what grip for their knife to use don’t think about. The 4P sells with a Kydex sheath that the knife fits very snuggly into it, but not to snug to the point that you have to wrestle with it when drawing it. There’s a detachable clip attached to the sheath as well.

As with all Esee knives, the 4P is made out of a high quality 1095 carbon steel, which is one of the strongest and sharpest blade materials to go with. If you want a trusty knife that you can take with you on each of your outdoor trips, the 4P Black Knife is one of the best Esee knives period. 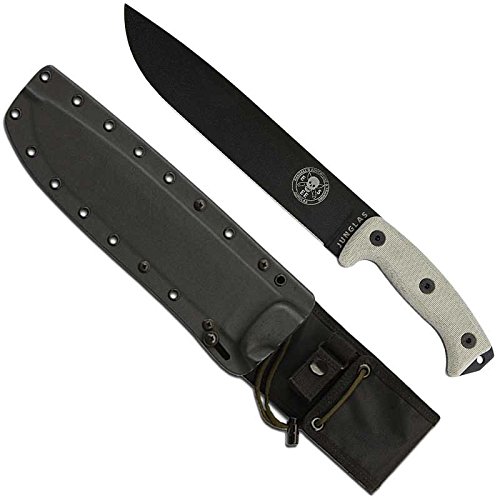 “Junglas” is actually pronounced “Hoonglas” despite the spelling, and is so named after the Columbian Special forces. The Esee Junglas Blade was designed specifically for combat in the jungle, specifically in Latin America, but without sacrificing the traditional qualities of the Esee knife that has made it unique from other knives in its class. To that end, the Junglas (see full specs) has a high end 1095 steel blade that measures just over ten inches in total length and is coated in a black color. The handle is made out of a gray micarta that matches nicely with the blade. Overall length of the knife is sixteen and a half inches, which is a good size for a fighting or a combat knife.

Last but certainly not least, we come to the Esee 5P Black Plain Edge Knife. As with all Esee knives the 5P is constructed out of a 1095 high carbon blade. This is the blade material of choice for professional cutlery around the world. While it is certainly more than suitable for hard use, it can stain or rust if it is not cared for properly, so it’s important that you treat your 5P Black Plain Edge knife (see full specs) as something that must be maintained rather than just left alone. A dry film rust inhibitor will be one of the best deterrents to rust and stain in general.

As for dimensions, total length on the 5P is just under eleven inches with a blade length of five a quarter inches. Even though the blade is high carbon steel, it is coated in black as is customary of most Esee knives. Weight on the knife is sixteen ounces without a knife. The knife ships with a Kydex sheath that comes equipped with a detachable clip. The grip is constructed out of a comfortable and long lasting Micarta. This is without a doubt one of the best Esee knives for the money.

What Makes the Esee Knife Unique?

The primary reason why the Esee knife is one of the best fixed bladed knives you can buy comes from the personal experience of the company’s founder, Jeff Randall. Randall had spent many years in rough and tough environments across the western United States and was determined to use his knowledge to make the best knife possible for any survivalist or outdoor adventurer.

Knowing from the beginning that his knives would be built entirely in the United States, Randall began to work with 1095 carbon steel, which had already been used on knives for over a century. Carbon steel is an excellent material for a knife blade because of how sharp and strong it is, making it one of the most versatile knife materials available. Randall simply set out to take an already proven material for a knife and make it even better.

The result was the Esee knife, which offers all of the ruggedness and reliability an outdoorsman needs. Each Esee knife uses a unique drop point blade, which creates a long lasting edge. The carbon steel of the blade and tang is combined with either the G10 or the Micarta for the grip, and each knife sells with a high quality leather or Kydex sheath.

In that regard, the best Esee knives are unique because they were originally intended to be an improvement upon an already proven system for designing knives. There are few knives that will last you as long as an Esee as a result of their uniquely strong blade and long lasting sharp edge.