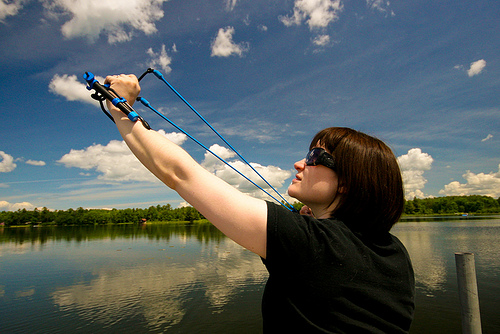 Photo by Peter Anderson / CC BY

Let’s take a look at some of the most common and effective ones to determine the best slingshot ammo you can buy. 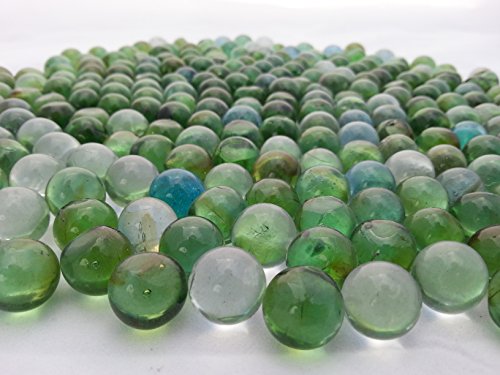 There will be some imperfections in the marbles, which is a reflection of their low price and intention for target shooting more so than hunting or competition use. These might include a very slight differentiation in size or some flat areas, but these are characteristic of marbles as a whole. But if you’re budget-conscious and just want to practice, this marble ammunition might just be the ticket. 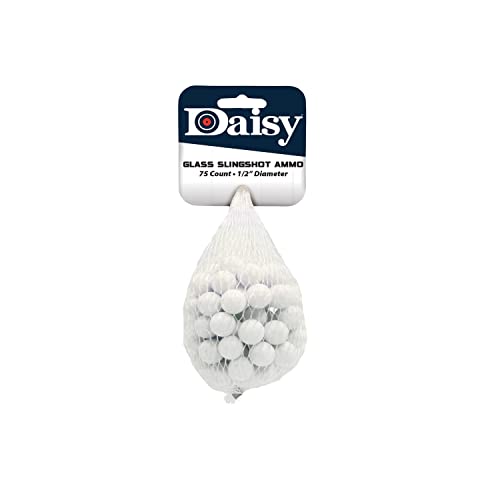 The first thing that you will notice about these projectiles is that they are white. White-colored projectiles are actually the best color if you want to follow the projectiles as they go because they stand out the best against the natural environment. Blue, brown, and green are common colors we see every day, but pure white is not. White also best reflects the rays of light back to your eyes; this is why these projectiles are called ‘tracer’ ammunition because your eyes can physically trace their path as they fly.

The advantage to tracer ammunition is that you can then make adjustments in how you fire the slingshot without having to actually walk up to the target and see where you hit. You’ll be able to get much more practice in this way while saving pellets at the same time. If you want maximum visibility in your ammunition, these are likely the best slingshot ammo you can buy. 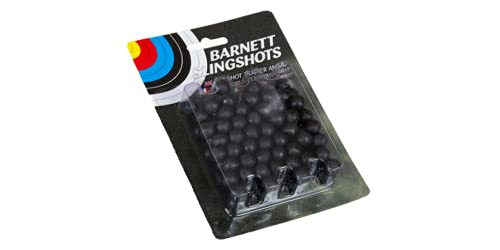 Barnett is a big name in the crossbow world, and in the fifty years that they’ve been in business, it’s estimated that they’ve sold up to or over a million crossbows so far. As a result of their far-reaching success, they have now ventured into the slingshot market as well, and that includes slingshot ammunition.

This pack consists of one hundred rounds of slingshot practice ammunition that were originally designed to be used with Barnett slingshots but of course can be used with other manufacturers as well. They are incredibly lightweight pellets and also supremely accurate, making them an excellent choice for target shooting. They sell with a five-year limited manufacturer’s warranty from Barnett. 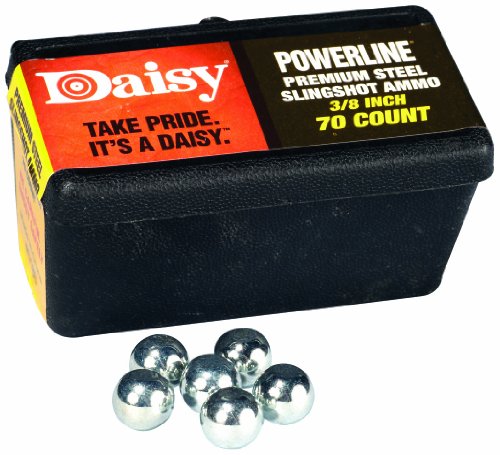 These slingshot projectiles measure 3/8 of an inch in diameter and are constructed out of a polished and zinc-plated steel material. Steel is considered to be one of the best all around materials for slingshot ammunition because they are equally adept for target shooting as they are for hunting small game.

The smaller size of these projectiles in particular means that you can carry more of them on your person at a time, and without noticing much of a difference in terms of weight. Each projectile is also perfectly round, and if discharged with enough power from the slingshot, could be enough to bring down a rabbit or a squirrel if you wanted to. The ammunition in the link above sells in a pack of seventy pellets each, and they even ship in a box that can clip right onto your belt for easy transportation and fast reloading. Hands down, these are among the best slingshot ammo on the market.

Which Type of Slingshot Projectile Do You Want?

As touched in our introduction, there are numerous different projectiles that can be fired out of a slingshot. One of the most common projectiles for target shooting would be marbles. The reason why is because they are so widely available and also so inexpensive. You can buy marble slingshot ammunition in bulk without making a major dent in your wallet. However, marble ammunition should also be reserved for target shooting rather than hunting. The reason why is because they are low in density, which translates to less stopping power and a poor choice for taking small game.

The most common type of slingshot projectile for hunting would be steel. Steel comes in a wide range of different sizes, with the half inch size being heavy enough to take game. It’s also the projectile of choice for professional slingshot shooters as well (as a result of the even circular shape). Since steel is strong as well, you can reuse the projectiles again and again even if a hard surface is your target or backdrop.

Finally, lead has a higher density than steel or marble, which makes them arguably even better choice for hunting than steel. The biggest disadvantage to lead slingshot projectiles is the high price; you’re going to have to budget accordingly if you want to use lead ammunition because the cost is simply higher for every shot. For this reason, many people will often opt for a material such as marble to use for target shooting and then use lead for hunting, or else use steel as a more suitable all around choice.

Of course, another option for ammunition for your slingshot would be rocks and pebbles. But make no mistake: while rocks and pebbles were indeed the first type of ammunition for slingshots, they are by no means the most effective. Rounded steel or lead slingshots will shoot in a straighter pattern whereas rocks, which can vary significantly in size and shape, will shoot all over the place. With these ideas in mind, you can go out and find the best slingshot ammo for your own needs. Good luck!