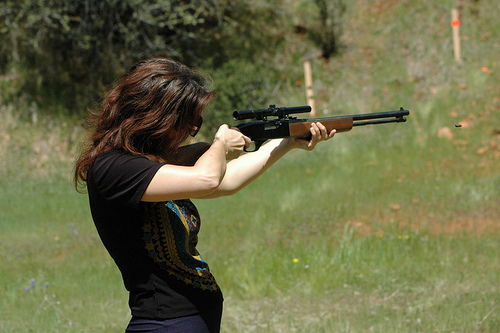 competitions are a fun and useful way to gain proficiency with the three primary types of firearms used in personal defense. Running a given course of fire, often with obstacles or particular objectives, three gun matches involve simulated defensive use of a handgun, shotgun and rifle or carbine. Due to the popularity of these competitions, a constant question is, “What is the best 3 gun scope?”

Unfortunately an in depth answer is highly complex. Suffice it to say, three different types of optics are commonly used in three gun competitions, and we take a look at some of the best of each type. In some cases, competitors are looking for a red dot or holographic sight. In other cases, a simple 1-to-4 power optical sight, and in others, a more common type of 3-to-9 power scope. All have their place, and all are commonly used in the sport, and we examine the best below:

This optic is unique in our reviews in that it can be readily used on a rifle, handgun, or shotgun, making it perhaps the best 3 gun scope for all-around use. Compact and featuring a lifetime warranty, the Burris Fastfire offers three levels of brightness, easy access to all controls, and tool free access to the battery compartment. It ships with a Picatinny rail mount. However, it can be adapted to mount on anything from a Weaver base to Glock mounting bases. If you are looking for a high end optic that you can easily move between most any gun you own, you owe it to yourself to examine this Fastfire.
3lb AR Build pt.8 :: Red Dot and Light 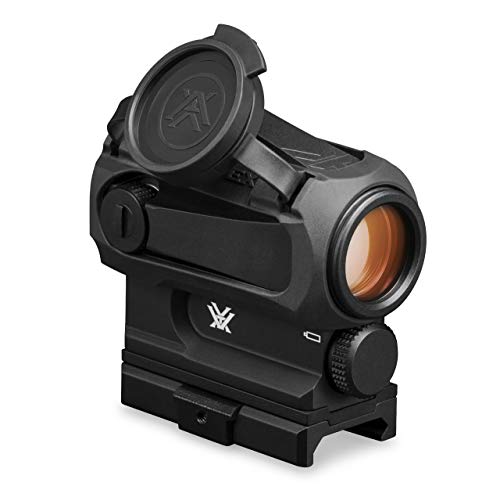 Another red dot vying for the title of best 3 gun scope, Vortex Optics brings a high quality red dot to the game. With fully coated optics, rugged water and fogproof construction, adjustable brightness levels and a twelve hour auto shutdown feature, you’ll find this is a red dot built for serious use. Capable of up to five thousand hours use on a single battery, the SPARC 2 can be mounted on nearly any firearm and is specifically built with the AR 15 type of rifle in mind. While it does not include any specific mount, it can be easily adapted for whatever use you might have in mind for it. This is arguably the best 3 gun rifle scope.
BRAND NEW Vortex Sparc II: See It First Here! - Tactiholics™

The 3 gun game demands an easy to acquire and highly accurate optic. To that end, red dots are popular, and what better red dot to use than a Trijicon? This state of the art reflex sight is compact and lightweight, making it ideal for use on a tactical carbine, while the 28mm aperture allows for a large field of view and rapid target acquisition. The perfect trinity of light weight, large aperture and Trijicon quality means that not only is this the perfect 3 gun optic, but it is also one you’ll use on your home defense gun, and on the rifle range. 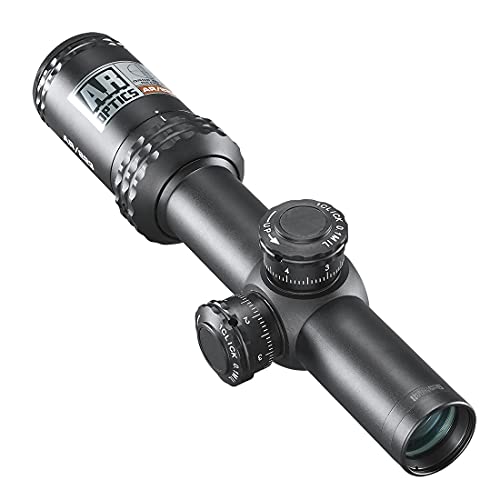 The three gun game typically features an AR 15 rifle or carbine in .223/5.56 and for good reason. This is one of the single most popular rifle and caliber offerings in the United States, and a modern sporting rifle is ideally suited for three gun matches. For that reason, the Bushnell AR Drop Zone may be one of the best 3 gun scopes you can choose from. Designed specifically around the .223/5.56 round, and featuring a bullet drop compensator for the most popular bullet weights, along with the usual high quality construction and design features you’d expect from Bushnell, this is a competition winning scope if you do your part.
Bushnell 1-4x PCL AR Optics

Barska 3-9x Compact Riflescope
While prior reviews have focused on what amount to optical sights with little or no magnification, there is certainly a place in three gun competition for a scope with moderate levels of magnification. The timed fire and close ranges of three gun shooting make high powered scopes largely a waste of potential. Instead, for many people, the best three gun scope is a three to nine power scope like this compact offering from Barska. Ideal for mounting on a carbine, this scope has a generous 42mm objective lens to help you get onto target faster, illuminated reticle, and of course is shock, fog and water proof. An excellent scope for a rifle that will take rough handling, this compact scope should be a welcome addition to your three gun carbine.

So first we need to define a few points. An optical sight, broadly speaking is an optic that has no to very little magnification. Red dots and low power (one to four power magnification) scopes fall under the broad category of optical sights, and are most useful at ranges where you’d use iron sights, or perhaps a bit further, but desire something more refined than simple iron sights. Red dot or similar electronic sights are very popular iron sight substitutes. They have no magnification (although low level magnifiers are available for certain popular models) and simply project a colored dot you line up on your target. Simple, efficient and rugged, these are some of the best choices three gun optics out there.

However, there is a lot to be said for a low power scope. A little bit of magnification can make it much easier to hit your target. In this case, you are “shooting” for a scope that is typically a one to four power scope with a decent sized objective lens to maximize sight picture and light gathering. Such scopes offer little in the way of long distance shooting ability (although during WWII, pretty much all major powers used similar low powered scopes, so maybe we are just spoiled today), but they will give you a crisp, magnified sight picture at close range which will aid you in rapid fire aimed shooting.

The last ideal choice is a traditional 1 to 9 power scope, again with a decent sized objective lens. Offering more power and flexibility than a 1 to 4 power scope, these scopes give you more reach out and touch ability, as well as a greater magnification at distance. I personally use one for hundred yard plus shooting all the time, and find I rarely have to crank the magnification up to full power.

There are a great many scopes on the market right now, and not all are suitable for three gun competition shooting. However, there are certain types that quickly rise to the top when looking for the best 3 scope, and you’ll find that finding the one for your needs may not be that hard after all.