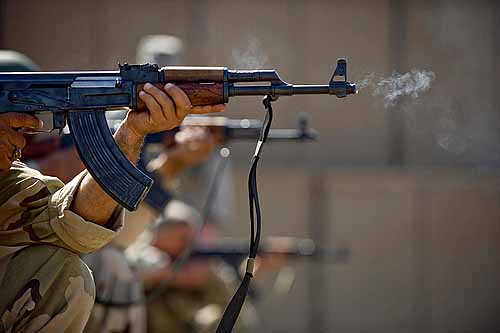 Photo by DVIDSHUB / CC BY

the right AK parts kit isn’t too hard if you know what you’re doing. While it is true the heyday of cheap AK’s made from Soviet bloc parts kits is pretty much over, the AK-47 itself is not going anywhere anytime soon. Once the cheapest modern sporting rifle on the market, the AK is becoming a mid-range to premium product, with high end guns coming from Europe and entry-level guns being made to various qualities in the United States.

Now that AK’s are somewhat respectable again, there is one question on everyone’s mind: what are the best AK-47 parts? Well, that’s a pretty loaded question, but as always we like those sorts of questions and have endeavored to answer them in a helpful fashion. We’ve scoured the internet to find the right parts “kits,” though they’re really individual parts that, clobbered together, will beat any generic kit.

Below are our recommendations for the 4 best AK parts kits on the market: A properly maintained AK is zeroed in for greedy capitalists, nosy journalists, and other enemies of the state, and while that is even good enough for deer hunting, it doesn’t allow the full potential of the rifle to be reached. AK’s are overgassed, which means more gas than is needed to cycle the piston. We aren’t fighting in mud though; we are shooting at the range.

This adjustable gas piston allows you to take control of your AK’s gas system, and dial it down to a reasonable, and functional level that will improve your accuracy and reduce wear and tear on your gun. AK-47’s are designed for use by conscripted soldiers the world over. Often from Third World countries and the former Soviet Union. Compared to the better-fed western troops, Soviet troops could be smaller in stature. This is reflected in the almost tiny size of the AK stock. Designed for men sixty years ago, they just don’t fit a modern American fed on healthy fare like cheeseburgers, hot dogs, and Doritos Nacho Cheese. Plus, well, the design is pretty dated. But what to do?

Well, the good folks at Magpul have designed a five position adjustable, folding stock that can be fitted with cheek risers. This takes a one size fits all peasant rifle, and turns it into a one-size-fits-all modern human rifle.

On top of that, the Zhukov stock offers plenty of ports for adding slings of all types. There is also a shock-absorbing rubber butt pad on the rear of the stock for reducing recoil and increasing comfort. The stock also folds to the right to ensure you can mount optics on your AK if you so choose. As a word of caution, this is designed for the common stamped AK and not milled or Yugo AK platforms. But it will fit 95% of AKs without issue and is quickly becoming the most popular AK Stock out there.

This wicked addition will make even the best AK parts kits better. You know what sucks more than a factory AR-15 trigger? A factory AK-47 trigger. Illiterate peasant-grade triggers are fine for spray and pray human-wave fighting, but not so much if you want to hit your target or at least be certain of where your rounds are going. Let’s not forget that trigger slap. Some AKs come forward so hard and fast it slaps the finger and causes pain. A refined trigger won’t cause that pain.

Probably one of the least appealing parts of the AK platform, triggers have long been a target for enhancement. The Red Star Arms trigger features a smooth and refined trigger pull that lands between 4 and 8 pounds. It offers a consistently smooth trigger pull that becomes predictable and easy to use (and you can set it for one- or two-stage pulls to boot).

It will give you better overall accuracy as well as a more comfortable design. It’s also very easy to install and made to last. If you are dropping this in a foreign-made AK then it also counts towards your 922(R) parts list.

It’s one great way to bring your AK kicking and screaming into the Free World, where men like their guns like they like their women: polished and refined. When it comes to working with polymer, Magpul has consistently proven itself to be capable of producing the best polymer accessories and magazines out there. The MOE AK handguards have an integrated heatshield to allow you to shoot an absolute metric ton of ammo before the handguard gets too hot to hold. This makes it easy to spew lead at a cyclic rate without fear.

The MOE Handguards are also fitted with M-LOK slots that allow you to attach accessories or rails wherever you want them. This handguard allows you to have the advantages of a modular handguard without the weight or discomfort than quad rails cause. The MOE handguard is also heavily textured to allow you to get a better grip on your rifle, especially when firing around barriers or from a low prone position. You can also get the MOE handguards in a wide variety of different colors including black, FDE, plum, and OD Green.

AK safeties work. That’s about all that can be said about them, along with the fact they were probably copied from the Remington Model 8, which means there is a little bit of John Moses Browning in the AK.

However, because this is the 21st century and we like our safeties to be a bit more ergonomic, and in the case of the AK-47, maybe lock the bolt back for added safety when we are at the range, something had to be done.

While it’s hard to improve on a Browning design, it was done, and Krebbs Custom offers what is probably the best AK-47 safety on the market today. Browning and Kalashnikov would be proud.

You’ll want an AK-47 to go with these parts. Might as well build one from the bare minimum. Blackheart Firearms does all the hard work of welding receiver rails, riveting trunions, and pinning the barrel in place. You just build it with your choice of surplus and new production parts to get your dream AK-47. The barrel is a chrome-lined American made component that will give you long-lasting performance. The kit is made from new Romanian parts and it’s compatible with a wide variety of AK components and upgrades. The Romanian AK models are extremely popular and this causes most AK upgrade companies to willingly design their parts to be compatible.

The Blackheart Barreled Receiver is a canvas for you to create your dream rifle on. It’s a start and where it finishes is entirely up to you.

The best AK-47 parts are readily identified by the ways in which they enhance the utility and function of your rifle. We know the AK-47 is a fine rifle, but it is rarely refined for civilian sport shooting and hunting. However, it is fairly easy to do so. Purpose-built sporting AK’s come from the factory built to a higher standard than milspec guns. But even milspec AK’s are easy to tune up.

While the AK isn’t as modular as the AR 15, its popularity has ensured you have plenty of ways to upgrade your favorite Russian rifle. One critical component to AK upgrading is understanding what kind of AK you have. Different AKs built in different countries can be slightly different. Make sure your parts are compatible with your AK regardless of where its built.

Using the parts we showed you today, you can take even a dull, bone-stock AK and turn it into a more accurate, better-performing, and more comfortable shooting platform. By investing in the premium parts most military users don’t care about, you can turn the world’s most prevalent rifle into a hunting, home defense, and sport shooting carbine that you (and even Comrade Kalashnikov) could really be proud of. Good luck!