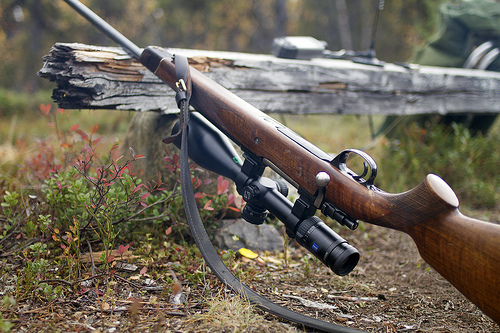 Photo by Hoplophobia treatmentcenter / CC BY

man go hand in hand since our first organized tribes and today it is considered a growing sport among Americans. When hunting with a long gun, the use of a sling is extremely handy.

A good sling can support the weapon’s weight, and make carrying the weapon over rough and uneven terrain easier and safer. A strong sling can help the shooter retain the weapon in case of a slip, or fall. A sling can also be used as an aiming aid to tighten the weapon down, and ensure greater accuracy and precision.

We’ve scoured the market for the 4 best hunting rifle slings and these are our recommendations below: 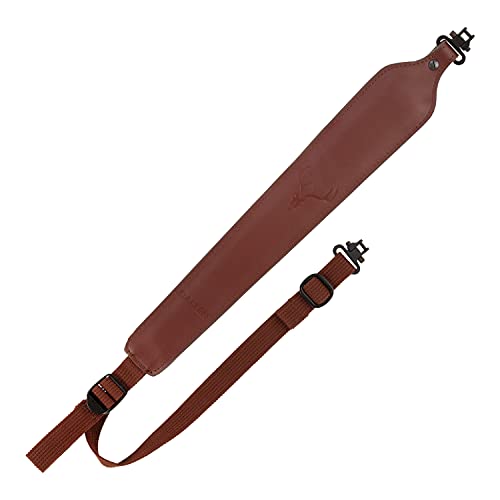 Allen slings are some of the most popular in the world among hunters. These aren’t tactical slings or made from fancy materials, but they are well designed, well thought out, and perfect for hunting. The Allen Cobra sling is named because of how the sling thickens near the end. This resembles a Cobra’s head. This Cobra head is designed to be the closest part of the gun to the barrel. So when carrying the gun this part rests on your shoulder.

The design of a wider sling at this point is designed to be more comfortable when carrying a heavy rifle. If the entire sling was thick it would be heavy and awkward. That Cobra head is the best of both worlds. The Allen Cobra sling is made from a combination of leather and suede. This material is both durable and very strong. Its classic appearance is also attractive and comfortable against the body.

The sling is equipped with very high quality and well-tested sling swivels. The swivels are capable of holding up to 300 pounds. So your heaviest rifle isn’t going to test this rifle. The sling can also be adjusted with one hand while being worn and while it’s on a rifle. The Allen Cobra sling is a modern construction, a modern design, made from classic materials. Without a doubt, this is one of the best hunting rifle slings for the money. 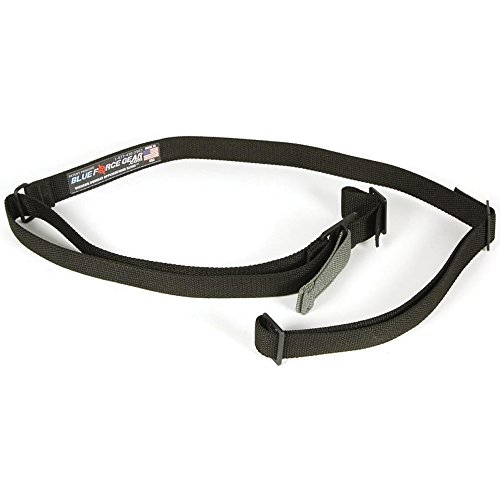 Okay, hear me out about this one. I get your apprehension about the Vickers sling for hunting. Traditionally this sling is used for tactical shooters. The designer is a former Delta Force guy and most of what he does is related to tactical shooting. With all that said, I think the Blue Force Gear Vickers sling is an outstanding sling for hunting. It’s a two-point sling so it functions like a traditional sling. It will carry a wide variety of weapons and is compatible with a wide variety of different types of sling attachments.

Shotguns, bolt action rifles, lever guns, carbines and more will all work with the Vickers sling. The Vicker’s sling offers shooters the ability to instantly shrink or grow the sling with nothing more than a pull at the sling adjustment device. This pull tab instantly changes the size of the sling. It can run tight to the body or loose and ready. This is why it’s an outstanding sling.

When you pull it tight the rifle is positioned perfectly for crossing rough terrain or climbing tree stands. The rifle isn’t dangling around and knocking and banging on everything. It holds itself tight to the body when climbing, but let’s say a deer comes out of nowhere. All you have to do is slide the pull tab down and loosen the sling. Bam, now you’re ready to shoot that deer. The Vickers sling is well made, adaptable and versatile. It’s great for both hunting and combat, and therefore should be on anyone’s list of the best hunting rifle sling. 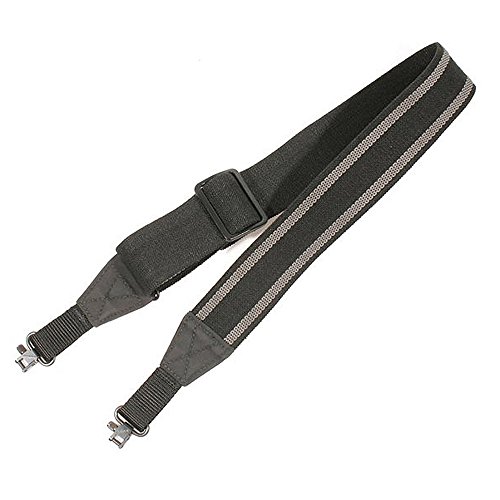 Blackhawk is mostly known as a maker of tactical gear, including backpacks and slings. Now stepping outside of the tactical realm, Blackhawk has designed a slinging specifically for hunting.  The Blackhawk Kudu (see full specs) sling is designed to maximize comfort and efficiency of carrying a rifle. The material used in the construction of the sling allows it to stretch and conform to the user’s shoulders, weapon, and the terrain they are moving over.

This 2-inch webbing works well to disburse the weight of a weapon across the user’s shoulders. The material is nylon and is naturally water-resistant and rot-proof. The Kudu sling is appropriate for any long gun, from hunting ARs like the Remington R 15 to the classic pump action Mossberg 500.

This sling is even suited for heavy magnum caliber rifles like the .300 Winchester Magnum or the .338 Lapua magnum. The Blackhawk Kudu sling is incredibly comfortable and completely ambidextrous. The Kudu sling is an interesting departure from the tactical gear that is produced by Blackhawk and is a well-made sling.

There is just something cool about a leather sling. Leather has largely been replaced by synthetic materials of all kinds, but still has a heartbeat in the shooting community. Leather looks and even smells good. It’s rugged, reliable, and time-tested. For the hunter who still prefers a wood stock, a leather sling is just the way to go. The Levy’s Leather Sling is tan leather with a soft and good looking suede backing. It features a functional but decorative stitching pattern to give you something straight out of the Old West.

The Cobra style sling means it’s wider at the top and slowly slopes downward into a thinner, more comfortable to carry holster. It’s stiff and well made, with several layers of leather that give it nice padding. The Levy’s leather sling is just as functional as it is good looking. The Cobra sling works with standard sling swivels and will function with both rifles and shotguns.

The wide top end allows you to set the gun on your shoulder in a comfortable fashion. This wider top end will enable it to rest on your shoulder with comfort, and the wider end distributes the rifle’s weight very well. This keeps things comfortable and classy looking. The Levy’s Leather Cobra holster is a fantastic sling for hunting and gives you that old school look and feel.

The best hunting rifle slings can easily and effectively make a more enjoyable hunting trip, from climbing tree stands to moving over and up and down hills, mountains, and through rivers. A sling acts as a third arm if you will, one that is completely invested into your weapon. A good sling works wonders when paired appropriately with a weapon. A sling is something I never leave home without, and if I may be immodest for a second, neither should you.