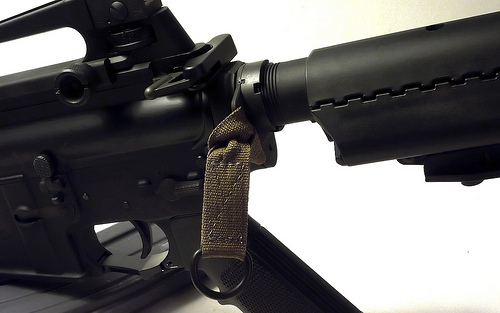 point slings remain very popular for modern sporting rifles and tactical weapons like the AR-15. Designed to mount to the rifle from a single point of attachment (hence the name), they allow the weapon to be quickly brought into action, and to hang freely on the body when not in use. They have proven to be especially popular on AR-15 and AK-47 type pistols since a good single point sling improves the handling characteristics and accuracy of these large handguns.

No matter the use you have for a single point sling, we know you are looking for the best. Fortunately there are many high quality offerings out there, and we found some of the most popular for you to look over. These 4 products below are our pics for the best single point slings on the market.

Magpul is a legend in the firearms business and is leading the charge in the use of polymer based products. They’ve extended into the sling world and produce some of the best slings on the market. The Magpul MS4 is incredibly modern and uses quick detach points to connect the sling to the weapon. The MS4 is quite adjustable and is designed to work specifically with the AR 15. It’s incredibly comfortable, durable, and will likely last as long as the rifle. The MS4 is a modular sling that gives the user options when attaching the sling to their body or plate carrier. The MS4 is one of the best on the market and a perfect companion for the AR 15 rifle.

This may be the ultimate AR 15 single point sling (though, it’s just as good for other rifles as well!). Designed to securely fasten to a tactical vest or other tactical garment, the Slingmaster Tactical Personal Weapon Attachment System gives you all the convenience of a single point sling in a short, innovative package. Designed for military and law enforcement professionals, this single point sling gives you rapid access to your weapon, yet safely leaves it to hang free in an easy to access position when not in use. Affordable, reliable, and quite frankly pretty darn clever, this is the sort of no brainer piece of gear you have to wonder why it took so long to bring to market. 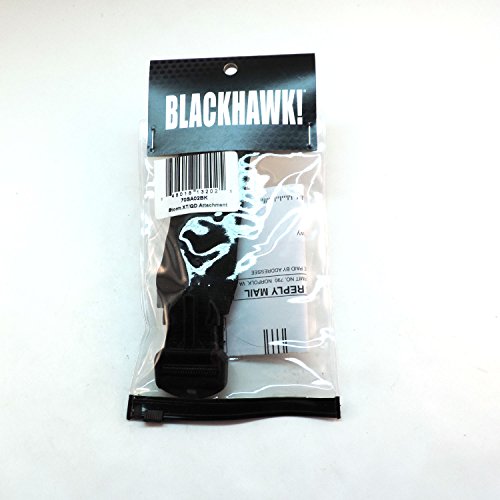 Blackhawk makes just about anything and everything that falls into the tactical genre. Their Storm XT sling is a more modern modular single point sling than most are used to. The Storm XT has a quick detach buckle and clip that allows the user to detach the rifle without detaching the sling. This is a major benefit if you run your sling through your plate carrier, a popular method with the troops. This allows you to set your weapon aside without unweaving it from the flack. It’s 1.25 inches wide, so the weight of the weapon and disbursed and it doesn’t dig into the body. The webbing is extremely strong and guaranteed to last through year after year of heavy use. This is among the best single point slings period.

The Tac Shield CQB sling is a simple and effective simple point sling. It doesn’t try to change the sling world, it simply tries to be an effective and efficient sling for use with a rifle or shotgun. The sling uses a soft 1.5 inch wide webbing to support your weapon and is quite adjustable. The Tac Shield sling has a HK style hook that fits near any sling point. The hook and slick can detach via a simple buckle, which allows you to keep the sling on but detach the weapon. It’s easy to adjust and works simply and well. Hands down, this is one of the best single point slings for the money.

Some Thoughts on Single Point Slings

I just picked up a Draco model AK pistol, and after tweaking it with a muzzle brake and a more comfortable pistol grip, I stuck a single point sling on there to allow easy carry and more importantly to give myself another way to support the pistol. With a single point sling, you can use the sling and your arm to better support the large pistol and achieve better accuracy than simply shooting offhand. it makes your handgun accurate enough for hunting and self defense purposes.

On traditional tactical and modern sporting rifles, the single point sling is mainly used on shorter carbine configurations. Here, it is a mostly tactical tool. For example, a good AR 15 single point sling would be for carrying your rifle at low ready or simply being able to let go of it and transition to a handgun at a moment’s notice. It also aids in weapons retention during close quarters operations.

The absolute honesty is that most of us reading this will never need or use a single point sling for more than simple convenience or to give an authentic look to a carefully crafted replica of a military weapon. For those using large handguns or pistol grip shotguns, the single point sling may be most useful outside of a tactical situation, while when used on a carbine, nearly all of us are going to care about the ease of use and handy functioning of a quality single point sling. Regardless, they are a darn useful bit of kit, and I have several lying around for use at the range or just to make carrying my varmint rifle a bit easier.