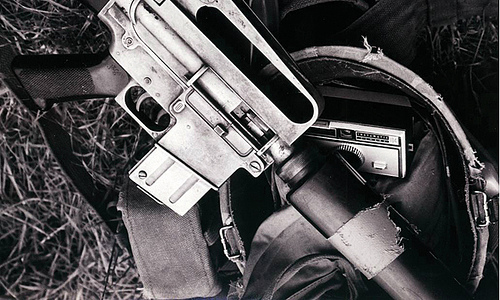 Photo by Stephen Hathaway / CC BY

get an M16A1 parts kit? Well, one of the hottest new trends in the AR-15 world are so-called “retro builds.” Designed to mimic Vietnam War era rifles and carbines or even early experimental models, these blasts from the past scratch an itch for nostalgia and vintage-looking firearms that cannot otherwise be fulfilled due to the full auto capability of the original firearms.

This article looks at several great M16A1 parts (all available from Brownells) and will cover all the major components needed to build an authentic-looking, retro M16A1 style rifle that will be perfect for reenactment, static display, or good old fashioned fun at the range.

Below are our recommendations for the 4 best M16A1 parts kits on the market:

While you can make a passably fake retro build by slapping some original or reproduction furniture on a gun, any knowledgeable person knows you need a proper looking A1 upper and lower (see the lower here). These two crucial parts are made from custom Nodak Spud forgings and machined to milspec standards by Brownells. Because there are notable design differences between the M16A1 and the M16A2, and later guns, it is important to start with correct castings that replicate these period parts.

From here, you’ll want to pick up whatever rear sight assembly you favor best (or maybe even use old surplus parts if you have them) and get a tear drop forward assist This will give you a solid start on building your M16A1 copy. Of course, you’ll need a good lower parts kit but you’ll be tossing the A2 pistol grip since you don’t need it. Go ahead and add a bolt carrier group of your choice and you’ve got your upper and lower taken care of:

Now it’s time to move on to the next step. The standard M16A1 barrel is a 20” chrome lined 1:12 twist barrel with a rifle-length gas system, front sight tower and an A1 flash hider. This accurate replica is ready for a gas tube and A1 flash hider. Together, you can combine all these parts to create a period correct barrel that will be accurate with standard 55-grain ammo. After all, while it’s nice to have a correct rifle, it’s even nicer to be able to hit stuff with it!

While you are at the barrel, you may want to consider adding an M-7 bayonet. It is possible to purchase new production M7’s, but you can also get nice, original bayonets that have some history behind them. They add a nice touch to your rifle, and really take you back in time with your retro build.

Brownells - AR15: Installing the Delta Ring Assembly and the Barrel Into the Upper Receiver

Now for the fun stuff. This replica M16A1 furniture kit provides an excellent reproduction to use in place of typically battered and damaged vintage furniture. While there are minor differences to aid in manufacturing and to prevent being passed off as the real deal, it’s so close, only a historian or somebody who was issued one could tell the difference.

Here too is a correct A1 style pistol grip so you can go ahead and toss that A2 grip you got in the lower parts kit. Several different colors are available, which closely replicate period prototype or issued colors. These are also ideal for dressing up an otherwise standard modern AR-15 with something a bit different. In fact, for some people, putting M16A1 furniture on their rifle length AR may be all they care to do. Heck, it certainly would be an eye turner at the range!

Putting your M16A1 Replica Together

As you can tell, there are significant structural and cosmetic differences between the old M16A1 and the later A2 platforms which also carry forward to modern AR-15 receivers. The A1 pattern lowers lack structural reinforcement meant to prevent failure when used with grenade launchers, and also to prevent cracking around the pivot pin area. The most notable difference between an A1 and A2 upper is the lack of a brass deflector.

There are other small differences between the various uppers and lowers, but an in depth examination is beyond the scope of this article, and the full range of differences is well documented. For an excellent history of the rifle, I would pick up a copy of Gordon Rottman’s The M16 (see it here) which is readily available from any bookseller.

While many people might not be able to spot upper and lower receiver differences, the M16A1 furniture is unmistakable. The classic triangular handguard immediately identifies the rifle, and clearly indicates retro styling. Another noticeable difference is the “teardrop” forward assist, which is radically different from the modern forward assist design.

One other part you might want is a 20 round AR-15 magazine as there were a mix of 20 and 30 round magazines running around after the adoption of the A1 variant of the M16. Original Colt mags can be had, but they are increasingly more and more valuable, but there are plenty of authentic replicas on the market. While you are shopping a period mag, you might as well look for a period sling as well, which are fortunately rather affordable.

Assembling your M16A1 replica is pretty straightforward, as the assembly is basically the same as a modern AR-15. Remember, most of what we are dealing with are minor cosmetic and structural issues, not major differences in key parts. If you’ve put an AR-15 together from scratch, you’ll be prepared for what has to be done. Or, if you are not comfortable assembling a rifle from M16A1 parts kits, it is easy enough to find a local gunsmith or even fellow gun owner who can help you with the task for a reasonable price.

Putting together an M16A1 replica is a tribute to the fighting men who carried this weapon in Vietnam and later conflicts. It is an iconic weapon that defines an era and a generation, and a part of our shared American culture. The M16A1 holds a special place in the memories and hearts of many people, and a quality retro build is a tangible link back to the past, and allows passing that heritage forward to another generation of shooters and collectors.