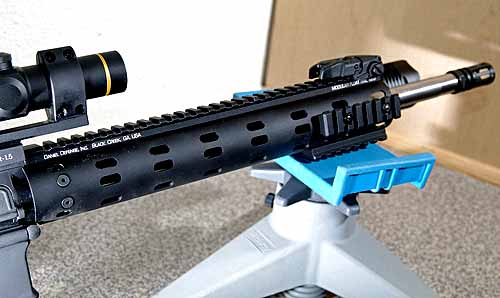 Blackout is one of the most popular cartridges for the AR-15 platform (other than the standard 5.56) and is becoming increasingly more available as finished uppers and commercial ammo become more commonplace. Because it only takes pushing a couple of pins to transform your AR-15, many people are now buying .300 uppers either for dedicated guns or to add caliber flexibility to their rifles (or pistols).

This left us asking the question you’d expect us to ask “What is the best 300 Blackout upper on the market today?” And as you’d also expect, we have an answer. Well, 3 of them really, and here these beauties are (and all can be purchased from an online gun retailer like Brownells).

Radical Firearms is well known for their affordable but high-quality products. This rifle length .300 Blackout upper receiver is outfitted with a 16-inch barrel, topped with a standard flash suppressor. Wrapped around the barrel is a 12-inch long M-LOK handguard. The Handguard is also outfitted with several QD points for attaching sling points. The Radical firearms upper uses an HBAR profile barrel.

This heavy-duty barrel ensures accuracy as well as long term use. It heats up a bit slower and would be perfect for launching tons of supersonic ammunition down the pipe. It’ll work perfectly for subsonic as well, but if you interested more in firing supersonics, this upper is for you. It’s an excellent suppressor host and a good choice for a dedicated rifle build.

Some of the best .300 Blackout uppers are for pistols or registered short barrel rifles (SBR). This offering also from Radical Firearms bundles some of the most popular pistol upper features into a single package. With a 10.5” barrel and a free floating KeyMod handguard, this is ideal for a pistol build or to stick on your SBR lower.

However, it is lacking a bolt carrier group and charging handle. Some folks might find this somewhat annoying, but I also recognize that sometimes people would rather add their own. Either way, it is an inexpensive way to get a high grade upper. Add the BCG, charging handle, sights or optics and you are ready to go! Aero Precision is one of my favorite companies and has been one of my favorite companies for quite some time. Their M4E1 uppers are absolutely outstanding, and they are both innovative and well made. This particular .300 Blackout model comes in three flavors, an 8-inch barrel, a 10-inch barrel, and a 16 inch barreled version. The .300 Blackout works well in short barrels and is an excellent choice for AR pistol or short-barreled rifle builds. The M4E1 uppers make it easy to build a lightweight, short-barreled AR 15 with all the modern features and accouterments.

The M4E1 rifle uppers come with M-LOK rails and flat top uppers. They are incredibly modern, ultra-reliable, and made to last. The M4E1 uppers are designed for professional use and are at home on Police rifles as well as serious rifles for home defense and competition. The M4E1 uppers are designed for long term use and will give you a lifetime of use. This is easily among the best .300 Blackout uppers you can buy. “But .300 Blackout fits in a standard AR-15 mag,” you say. And that is correct, and also part of the problem. It is easy to mix up magazines and a .300 round chambered in a 5.56 upper can be a real explosive nightmare. Some folks mark their mags, others use different styles, and some don’t care and rely on their wits to keep mags apart.

Or you can do what I did, which is buy a bunch of these D&H mags and call it good. D&H makes good mags, and once you find the best .300 upper, you should pair it with some dedicated magazines. Mags are cheap, errors at the range are dangerous and expensive; make sure you have some dedicated .300 mags unless you only shoot .300.

The .300 Blackout is a solution to a real problem. How do you get an effective .30 caliber round comparable to the 7.62x39 out of an AR-15 platform without any of the many shortcomings of 7.62x39 AK’s? The answer was basically to cut the neck off a 5.56mm case, stick a .30 caliber bullet in it, tune it up and call it awesome. Because of the way it’s designed, standard proven AR-15 bolts and magazines can be used, and the round loads 1:1 in a standard mag. Really, what’s not to love? From sub sonic heavies to supersonic blasters, there is a load for almost every tactical, hunting and sporting purpose suitable for a mid range cartridge, which makes choosing an upper a bit of an art.

If you are building a pistol or a registered short barrel rifle, then a 10.5” or 8.5” upper seems to be the most popular choices. They are easy to handle and with the right loads are quite effective. Add a suppressor and you have a lovely, quiet shooting gun that is perfect for home defense, or some hunting tasks. If a full size rifle is your game, than really most any 16” upper will do the job. Price point and barrel quality are the two biggies here, but the reality is unless you are an expert shooter any quality upper will do the job, leaving price as the key point. It’s nice to get an upper with a free floating handguard, but that isn’t required unless you want that, and it’s always easy to retrofit later.

Not all uppers ship with a bolt carrier group and charging handle. These crucial parts are also something of a personal choice, with some preferring a basic set, while others looking for premium parts. Partly for that reason and partly for selling to a price point, many uppers do not ship with these parts. Be sure to factor that into your shopping.

The .300 Blackout has really started taking off on its own. Factory ammo of all sorts is readily available and there is a growing array of uppers to build a firearm around or to swap out your existing upper with. However you approach it, the best 300 Blackout upper is a great way to add a new, harder hitting twist to your shooting activities and really add some reach out and touch something to a platform somewhat infamous for being sometimes underpowered. Pick an upper and start having fun!