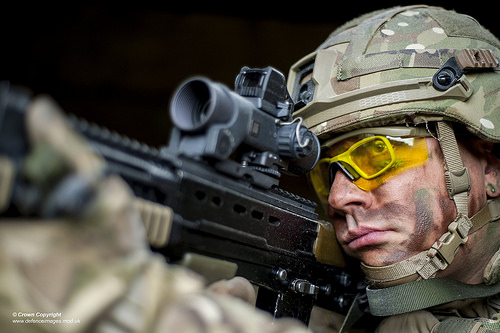 Photo by Defence Images / CC BY 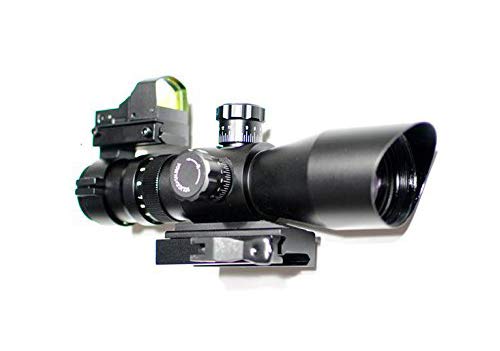 The Trinity Force optic is an excellent option for those looking to outfit a basic carbine like the AK 47 or a carbine variant of the AR 15. The Trinity Force is a low profile, lightweight optic that offers a variable option from 1 to 4 magnification. The Trinity Force has a slim 28 mm objective lens that keeps the scope low and slim. The optic is made from aircraft grade aluminum and comes complete with a one cantilever scope mount designed specifically for the optic.

The Trinity Force offers a stabilized quick release system that is locked down tight by two throw levers. The Trinity force doubles down with quick adjust locking turrets that allow for fingertip adjustments and ½ MOA adjustments, the turrets can then lock down tight to prevent any unnecessary adjustments. The reticle is also etched in the optic’s glass.

In addition, 1-4 magnification is perfect for most close range situations. However, if you were to move indoors though it would be difficult to use any standard tube optic. Mounted on top is a small, lightweight, miniature red dot mounted just behind the top adjustment turret. This miniature red dot is perfect for bad breath distance encounters and doing “social” work.

The Trinity Force 1-4x28 makes an excellent optic for a self-defense rifle and covers most bases for those living in the city or more rural environments. Another use for an optic like this is dynamic, fast moving shooting competitions, like three gun competitions (see our article on the best 3 gun competition optics). The versatility is unparalleled, and this is surely among the best scopes with red dot on top. When it comes to overall strength and durability the Trijicon ACOG is unbeatable. The Trijicon ACOG was adopted by the United States Marine Corps and was so precise that led to a noticeable in headshots. In fact, this happened so often that a Congressional investigation was launched. The ACOG is a fixed 4 power optic with a 32 mm objective lens. The ACOG is complete with a bullet drop compensator designed for use with the 5.56 round.

The Trijicon ACOG is made from a forged aluminum that is both incredibly strong but very lightweight. The ACOG’s illuminated reticle is a battery-free design and is powered by absorbing light from the area around it.

On top of the optic, this Trijicon has mounted a rugged miniature red dot optic that is just as tough as the ACOG. The RMR features a crosshair .223 ballistic reticle and is designed to be used rapidly for close range engagements. The combination of the red dot holographic optic and the fixed 4 power optic make this ACOG the perfect choice for both close quarters battle and medium range engagements. If you can afford it, this is without a doubt the best scope with red dot on top.

The NcStar MK 3 is close range, ACOG style optic designed for medium and close ranges. The Mk 3 is a 3-9 power optic that provides a surprising amount of power for such a small, lightweight, and compact optic. The objective lens is a wide 42mms and is perfect for a variety of carbines. The Mk 3 mounts on any standard Picatinny rail, like an AR 15 flattop carbine.

The NcStar Mk 3 features fully multi-coated lenses for maximum light transmission in any environment. The turrets are finger tip adjustable and open target style. The Mk 3 features a built-in sunshade to reduce glare. The built bullet drop compensator makes placing rounds at longer ranges simple and easy to do. The bullet drop compensator is designed to be used with 55-grain .223 rounds. The optic has a built in quick release lever easy to attach and detach. The reticles have different brightness settings, and the user can swap the illuminated reticle from red to green. The reticle was surprisingly bright and long lasting.

An additional option is the miniature red dot mounted on the rear of the optic. The Mk 3 uses a specifically designed ring with a small, built-in weaver platform for optics mounting. This ring attaches to the ocular lenses housing and mounts the miniature red dot for quick access. It simply takes the tilt of a head to bring this miniature red dot into view. The transitions are seamless and rapid with the Nc Star Mk 3. 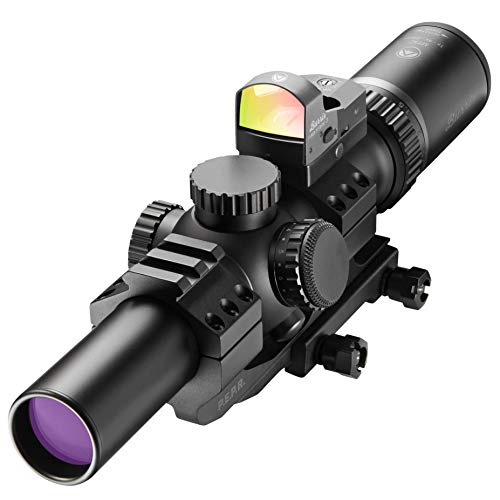 The Burris MTAC rifle scope is a variable option with a mounted Fastfire red dot scope that ranges from 1 to 4 power in its magnification. The Burris MTAC is a lightweight, compact rifle scope designed for engagements out to 500 yards with an average shooter. It’s only 11.3 inches long and weighs a mere 17 ounces. The MTAC and Fastfire series of optics are quite well made and tested for reliability and durability. Let’s talk about the MTAC first.

The MTAC series of optics features extremely high definition and high-quality lenses. The MTAC uses precision ground optical glass that is index matched and fully multi-coated. The multi-coating is a Hi-Lume coating, which delivers a clear, sharp and high-resolution picture. The MTAC is available with both a ballistic close-quarters reticle for general rifle use or a Ballistic AR reticle designed for AR 15s. The MTAC is an excellent all around optic for tactical use, for competition, and for plinking.

The Fastfire is a miniature red dot optic that’s been incredibly popular with shooters. It’s found its way onto handguns, shotguns, and rifles. Sitting on top of the MTAC it allows you to make quick and easy transitions between targets near and far. The Fastfire is small, tough, and made to last. The Fastfire miniature red dot makes it simple and easy to hit targets out to fifty yards. With the MTAC and Fastfire combo, you can shave seconds off your split times. This is among the best red dots on top of scope products.

Conclusion – On sight, On Target

The combination of a magnified optic and the addition of a close range, holographic red dot increases the ability of both the user and the rifle. The combination of optics allows the rifle to be used in everything from close quarter’s battle to counter sniper missions. These optics allow a wide variety of engagement potential and excel is both defensive and dynamic competition. We hope you’ve found the red dot on top of scope product for your needs. Good luck!