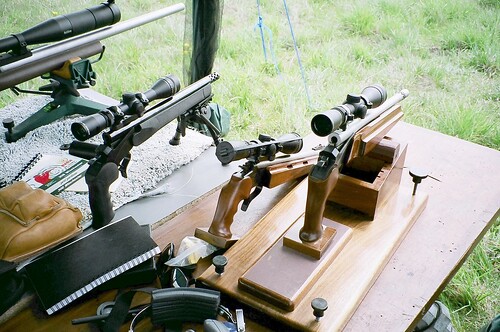 Photo by Davidwhitewolf /CC BY

Vortex – so which is better? The optics world has exploded in recent years and never before have we seen the selection we have now with companies are offering scopes, red dots, prisms sights, and more at every price point. Burris and Vortex cater to more affordable yet still effective optics for the average person so it makes sense they would go head to head. Let’s take a look at both companies’ offerings and what pros and cons we can gleam from their products.

Burris is a brand based on building excellent optics at a tight budget. They don’t produce cheap optics; they produce affordable models. They produce a wide variety of optics, as well as optic’s accessories including mountings systems and scope rings. Vortex, on the other hand, is a relatively new company, and they produce absolutely everything from affordable to premium. They produce red dots, variable scopes, as well as binoculars, spotting scopes, and more. They also produce a wide variety of mounts and optics accessories.

Both companies are well known and respected in the optic industry and their variable scope lines are both massive and it’s hard to pin down which models to compare as to make the competition unbiased. Vortex has some optics in thousands of dollars and Burris does not. Instead, we are going to focus on mini red dots and fixed power tactical sights.

Both companies produce massively popular mini red dot sights. Vortex actually produces two, as well as numerous other standard sized red dot sights. For this section, we are going to be looking at the Burris Fastfire 3 and the Vortex Venom. Mini red dots can be used on just about any platform, including handguns. Both of these optics are very popular for handguns as well.

Both come with Picatinny rail adapters, both are compatible with the Glock MOS system, and both use top loading batteries.

The Burris Fastfire 3 offers shooters a 3 or 8 MOA red dot reticle with three brightness settings and an automatic mode. The automatic mode reads the external light and adjusts the dot as necessary to make it easy to see.

The Vortex Venom, in contrast, comes in either a 3 or 6 MOA dot and has an auto setting as well as 10 brightness settings for manual adjustment. The automatic mode is just as powerful and reliable as the Burris Fastfires.

Do more settings make an optic better? In many ways, the ability to customize your brightness level will make it easier and more comfortable to shoot with. The Venom does allow for fine-tuning. The Burris has a single button to switch brightness settings, and the Venom has an up and down button. In other words, if you pass by the setting you want with the Burris, you have to go through the entire circuit before you get back to it. With the Venom, you can just press the back button and be there, which makes it “better” for most. However, some folks like simplicity before anything else, in which case, the Burris is better.

Mini red dots are supposed to be light and handy, and both optics are. However, the Fastfire 3 (see full specs) is .15 of an ounce lighter, and that does matter when mounted to a handgun, especially for concealed carry.

Price-wise the difference is quite small. Burris does support the optic very well with dedicated shotgun mounts as well as handgun rear sight replacements to make it easy to mount to handguns without a milled slide.

Both use small battery systems that will last for quite some time. Up to 5 years on low power settings. The Fastfire 3 does have an auto-off after 8 hours as well. I’m partial to the FastFire 3, but the Vortex Venom (see full specs) is hardy competition indeed.

The Vortex Venom on my Truck Gun

Fixed power tactical sights are often low-powered optics with a 2.5 to 5 power. They are designed to be a stop-gap in-between variable high powered optics and red dot sights. They are perfect for semi-auto rifles of all kinds. Both Vortex and Burris make fixed power prism sights.

Burris has the AR series, which offers models with 5x and 3x power. Vortex offers the Spitfire is 3X. Both optics are robust, but also relatively affordable. Bth optics offer a reticle that works for both close quarters shooting and long-range engagements. The Burris series gives you either the CQ reticle or Ballistic AR. 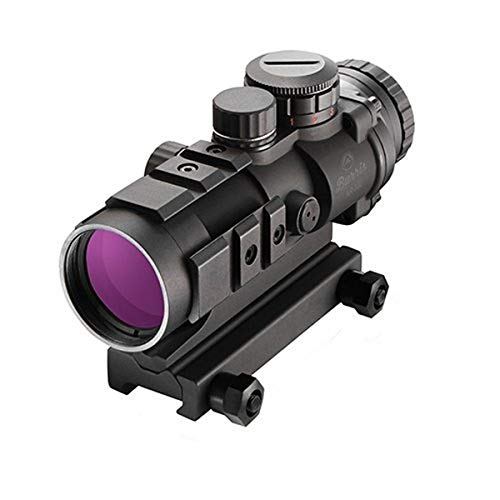 These reticles allow for compensation over longer ranges with drop points. This is more present on the Ballistic AR reticle. The CQ reticle is designed to act as both an extended range reticle and a CQB reticle. 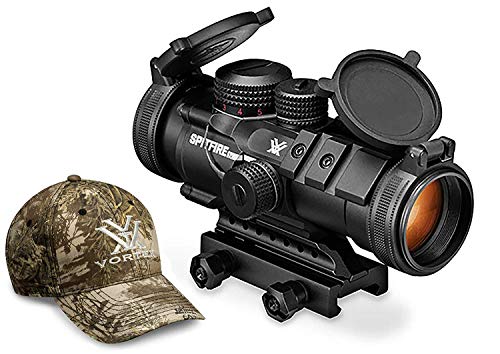 The Vortex Spitfire incorporates a half donut reticle with descending points to allow a shooter to compensate for bullet drop. This makes it easy to use the reticle for a multitude of shooting situations.

Both companies offer a green reticle that can extend the life of batteries and is softer on the eyes. The Spitfire does have 10 brightness levels compared to the Burris’ 5 settings. A big advantage is being able to customize your brightness settings for your comfort and environment and fine-tuning them makes a big difference.

Vortex Spitfire 3x: Get Up Close And Personal - Tactiholics™

The AR332 is over an ounce lighter than the Spitfire, and also generally cheaper. The Burris is slightly shorter but not significantly so. Both optics are compatible with lens covers, and the Spitfire actually comes with them. Both optics also come with integral mounts that are designed.

Both the Spitfire and the AR332 come with Picatinny rails to allow you to mount a mini red dot. The Burris AR332 even has a combo package available that includes the Fastfire 3 with the AR332 and is still cheaper than the Spitfire.

Both optics are designed to last and are shock, water, and fog proof. Either one is perfect for your semi-automatic rifle, and they are both backed by amazing warranties. The Vortex is generally better-received and more popular so if you have an extra Ben Franklin to spare, I’d get that (though price fluctuations do happen). If you don’t want to lighten your wallet by that much, the Burris is perfectly fine.

The good news is both Burris and Vortex make outstanding optics and they are often much more affordable than your standard optic. Both companies are responsible for changing the face of the optics world. The good news is the market is so big you can pick and choose the exact features you want as you make your choice. Good luck!