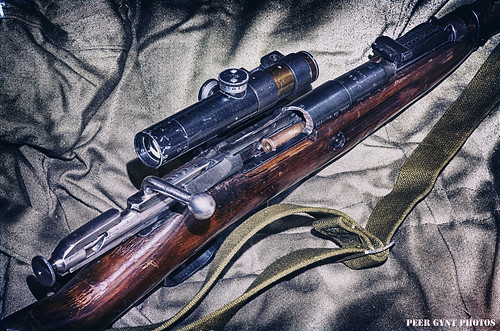 Photo by Andrey Korchagin / CC BY

think of rifle scopes, they’re typically thinking of long distance shooting. In fact, a great many scopes are sold just for that purpose. Many rifle shooters take pleasure in shooting out to great distances, or may need that ability, for law enforcement or hunting purposes. For most people, a scope means shooting at long distances. But oddly enough, there is an equally valid reason for low power short range scopes. During WWII, low power scopes were the rule. All major powers fielded scopes that rarely exceeded 4x magnification, and rather famously, the Soviets made great use of Mosin Nagant rifles with crude 4x scopes mounted on them. But that was 1941, not the 21st century. What use are low power scopes today?

Typically, modern rifle shooters look for a low power scope to fill the role of what might be more properly termed an optical sight. While it is true you can use a lower power scope for distance shooting, most shooters choose a 1-4 power scope for shooting distances they might commonly shoot with iron sights. The use of an optical sight simply affords somewhat greater magnification at short range, making target selection and engagement easier than using irons, while permitting the use of a small and lightweight scope. The best 1-4x scopes give you the advantages of a magnified target, without the complexity, expense and size of a modern high powered rifle scope. 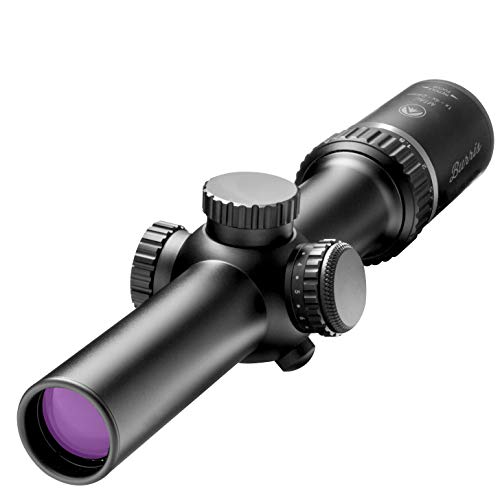 Burris is one of the most recognizable names in rifle scopes and for very good reason. They are well known for making top quality scopes rugged enough for the most demanding outdoors and tactical use, but affordable enough for the shooter who wants quality, but doesn’t want to break the bank. The Burris MTAC 1-4 power scope features a generous 24mm objective lens, illuminated reticle, multicoated optics, and a surprisingly low cost for a top of the line 1-4x scope. Ideal for AR type rifles, the MTAC is suitable for any rifle that needs a 1-4x scope.
AR15 Burris Fullfield TAC-30 1-4x scope 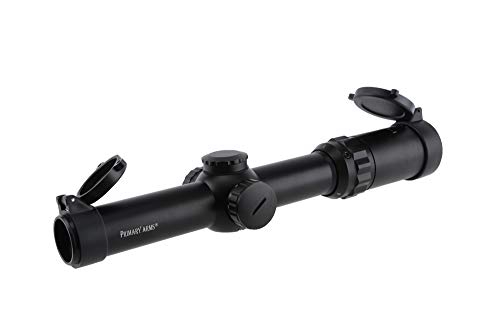 Primary Arms is one of the most affordable optics brands on the market, they produce interesting and high-quality optics for a good price. They shift between tactical and traditional optics, and one of their newer optics is the Primary Arms 1 to 4 power. The Primary Arms 1 to 4 power utilizes an illuminated dot reticle with a duplex around it. The scope is quite simple and built very well. The optic is designed well for any rimfire or centerfire rifle. It would be exceptional on a pistol caliber carbine. Primary Arms also backs their goods with an excellent warranty and top of the line customer service.

Barska is known for budget scopes that offer high performance. Many shooters are quite happy with their Barska scopes, and find they serve as well as the big dollar offerings. In the best 1-4x scope game, this Barska comes packed full of big money features, without giving your bank account heartburn. With its 28mm objective lens, red, green or black illuminated reticle, lockable target turrets, nitrogen purged and o-ring sealed tube, plus included cantilever mount with rings, the Barska 1-4 power scope is one of the finest optics for its price range. Out of the box ready to mount on your flatop AR or other rifle, the money you save on the Barska makes every shot you take all that much sweeter.

The Best 1-4 Scope Contender #4: One of the Oldest Names in Rifle Scopes

Weaver is just as famous for their rings as their scopes, and for very good reason. Weaver has been an American institution since before the second world war. Generations of rifle shooters have grown up on Weaver optics and mounting rings, and have come to rely on and trust the Weaver name. For a very reasonable cost, you can put one of the most trusted names in rifle scopes on top of your rifle, and rest assured that you have made a lifetime purchase that your children and even grandchildren will enjoy, just as you enjoyed using your grandfather’s Weaver scoped rifle. The Weaver Kaspa has an anti-fogging nitrogen purged tube, illuminated reticle, and a larger 30mm tube for enhanced light gathering ability. Again, this might be the best 1-4x scope for AR 15 rifles since they’re designed mainly for that particular platform. However, this power scope works on almost anything you might want to put it on.

As already mentioned, the best 1-4 scopes are also commonly called an optical sight, as they perform a job more in line with a sight than a magnifying optic. The low levels of magnification make 1-4 power scopes suitable for ranges out to about three hundred meters or so, and make these scopes common on modern tactical rifles, or hunting rifles used in thick brush, woods, or where the game is typically found at shorter ranges. While many iron sighted rifles are quite fine for such ranges, it is hard to argue against a bit of magnification to better enhance and engage the target with.

A low powered optical sight such as a 1-4 scope will bring your target visually closer, while not distorting it or requiring you to support your rifle to reduce the effects of minor movement on your sight picture. Using a 1-4 scope gives you the compromise between strictly iron sights, or a high powered optic that might simply be too much scope for the job at hand. Choosing the right tool for the right task is important, and low powered rifle scopes give you the intermediate choice between old fashioned iron sights, and high powered, long range target or hunting scopes.

Additionally, a 1-4 scope makes an ideal optic on a patrol or home defense carbine, as you can use it at anywhere from no magnification to a handy four times magnification, which makes using your scoped rifle in close quarters easier, and more manageable under stress, while still giving you the many advantages of an optical sight. Whatever your reason, remember that Stalingrad was fought with simple four power optics, and now you can enjoy cutting edge technology that gives you vastly superior 1-4 power scopes, that are more rugged, reliable and advanced than anything ever seen before.

We live in a golden age of rifle optics that fill every need and role, and fit every budget. Why not take advantage of this, and put a nice 1-4x scope on your favorite AR type rifle, or short range brush gun? You’ll be glad you did, and find the upgrade is worth it.