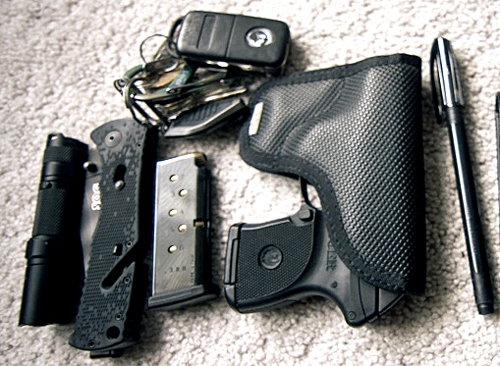 Photo by Kid Clutch / CC BY

LCP is one of the most popular .380 semi-automatic pocket pistols, and for very good reasons. Backed by the famous Ruger name, the LCP is the nearly perfect balance of power and small size, in a readily concealed, easy to draw, and has a lightweight platform. Made with a polymer frame and steel barrel and slide, the LCP has become the .380 by which all others are judged. The .380 offers excellent stopping power for the size of the handgun, and is growing increasingly popular with law abiding citizens as an ideal concealed carry handgun, and with law enforcement as a suitable backup firearm. Finding the best pocket holster for Ruger LCP pistols would be the next logical step in carrying it concealed. 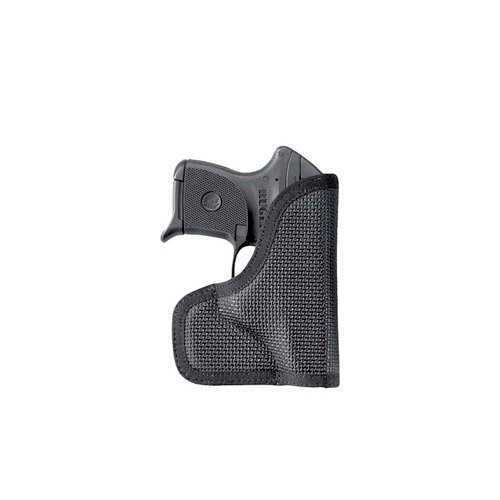 DeSantis is one of the most famous names in modern holsters, because they make top quality, and functional holsters that simply work. The DeSantis Nemesis is one of those simple holsters that just work (see full specs here). Built as a pocket holster for the Ruger LCP, the Nemesis does everything a pocket holster should do. It keeps the gun upright for easy drawing, it protects it from sweat, and it keeps dirt and lint away from the gun’s internals. There isn’t much more you can ask for in a pocket holster and as an added bonus, the Nemesis costs less than a box of ammo. 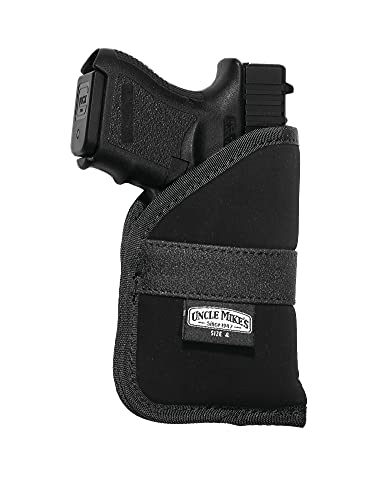 Uncle Mike’s is another famous holster company. My first holster was a basic Uncle Mike’s open top holster and I liked it so much, I bought more for my other handguns. Their LCP pocket holster (see full specs here) again does all that you can ask from a pocket holster, with the added bonus of protecting even more of the gun from pocket garbage than other designs. Its thicker nylon construction breaks up the profile of your LCP, blocks moisture and sweat, and features an easy to draw from open top design. Absurdly affordable yet highly effective, the Uncle Mike’s can be considered among the best pocket holsters for Ruger LCP pistols.

Holster. Gun. Whatever. Draw ‘Rm Both.

Wallet holsters are the (illegal) stuff of legend. It’s hard to believe now, but there was a time when concealed carry was looked on with suspicion and you needed a good reason to get a permit to carry a concealed handgun. Fortunately, those days are long behind us for nearly all of the United States, but there are still odd echoes of that past kicking around. Wallet holsters concealed the entire handgun, and allowed a person to shoot their pistol without even removing it from the holster. Ideal for quick draw situations, or where deep concealment was warranted for personal or social reasons, wallet holsters allowed a gun owner to not have to worry about the fiddly annoyance of removing a gun from a holster in their pocket. Needless to say, such holsters soon were outlawed, and have vanished from all but cultural memory. 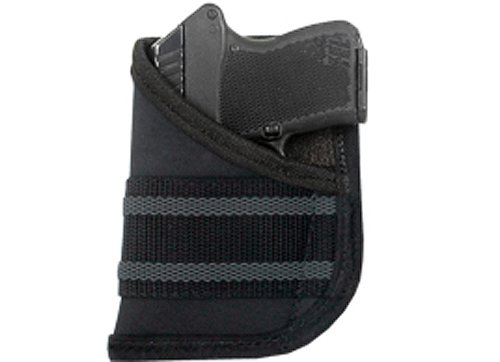 However, the Ace Case’s Pocket Holster is as close as you can get to an old fashioned wallet holster and still be legal. The Pocket Holster covers most of the frame of your LCP, and allows free movement of the visible slide, and access to the trigger. As an LCP pocket holster, this might be the most convenient and useful type of them all. The Pocket Holster gives you all the main benefits of a pocket holster for your LCP, while allowing you to draw your gun as quickly as if you had no holster at all. If you want the quickest access to your pocket carried LCP, this may be just the ticket for you.

Some people take pocket carry a little too literally. I know I have in the past, and have carried a small pocket pistol in my pocket with no holster. I wasn’t worried about the profile of the small pistol showing, and at the time I saw little or no reason to bother with what I thought was the inconvenience of a holster. After all, pockets are for carrying things, right?

At the time, I had a lovely little antique Colt pocket pistol I was carrying, and I noticed after a particularly warm day, my beautiful little antique was covered with a thin layer of rust on the side closest to my leg. A day of constant perspiration from walking in the heat had attacked the finish on my little gun, and I had to quickly clean and oil it to prevent any other damage or wear. That’s when I discovered the other problem with bare pocket carry. The gun was full of dust and lint and what not. It could cycle still, but barely. After cleaning and lubing my gun, I resolved from that point on to only carry with a pocket holster. Pocket holsters minimize wear from sweat, break up the profile of your gun, protect it from lint and dirt, and keep the gun riding at the correct angle for drawing. That was the other problem I’d had, sometimes my little gun would shift around so much in my pocket, it would have had to been rotated in order to properly draw. A holster would have solved all those problems.

Seriously, You Want a Holster

No matter which pocket holster you choose for your Ruger LCP, you need one. The LCP is a fine handgun, and will serve well for personal protection or backup duty. Pocket holsters protect your gun from sweat and moisture, keep jam causing lint, dirt and grime out of the inner workings of your LCP, and keep it in a position to quickly draw. Pocket holsters for your LCP also break up its profile, and keep people from knowing that you are carrying a gun in the first place. Some laws and social situations dictate discretion in carry, and a pocket holster gives you that discretion. Given that you may depend on your gun to defend your life, shouldn’t you be willing to at least get the best pocket holster for Ruger LCP pistols?