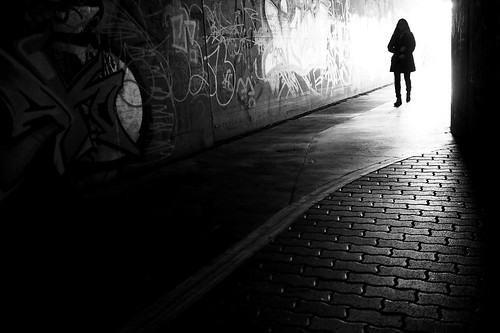 Photo by Transformer18 / CC BY

woman in the world is getting harder and it’s even more difficult when you’re a little (no pun intended) on the smaller side. You may have been told not to go out after dark or to stay out of certain parts of town, but sometimes that’s just not possible. The good news is you’re on the right track by looking into self-defense, just to make sure you feel ready for anything.

Keep in mind that learning self-defense and coming to a place where you’re mentally prepared to act in your own defense takes time, so be patient with yourself. That being said, there are a number of self-defense tactics that will be your first line of defense if you ever find yourself in a sticky situation. 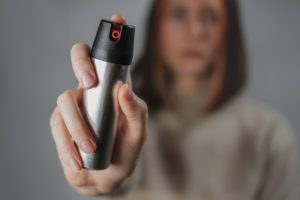 Carry pepper spray (may also be called mace, depending on where you are). This is by far the easiest and most cost-efficient method for self defense you can use. Pepper spray is great to deploy if you happen to be upwind from your attacker to disorient them instead of resorting to engaging in an unarmed fight—which you, as a small woman, might not want to do.

Admittedly, using pepper spray does come with the risk that you may be caught in the spray as well and shouldn’t be used indoors if you can avoid it, but it’s a great alternative to directly striking your opponent.

The best type of pepper spray to carry is any formula containing not only pepper spray but also military grade tear gas and UV ink. Having the added tear gas will enhance the performance of the pepper spray and further disorient your attacker. The UV ink will aid law enforcement in tracking and identifying the individual. The dye will cling to their clothing and shoes and law enforcement will be able to use this to their advantage.

Popular brands that have proven to work effectively are Sabre Red, POM, and Fox Labs 5.3. Whichever pepper spray you choose, keep it in an easy to reach place. Do NOT put it in your purse for it is the first thing an evildoer might snatch away. Best to keep it in your pocket or in a clip to your belt, and if you’re hardcore (i.e., smart), put one in each pocket so you can spray with your left or right hand. Aim for a less than 1 second time from the time of you pick up your spray to spraying it in your attacker’s face. If you can do it in a half second, even better.

One thing: If you can pair the pepper spray with a very bright flashlight (1000+ lumens), this is the best combo for nighttime defense. Even some firearms instructors have stated a bright flashlight/pepper spray combo would take care of 90%+ of most situations you’ll run into.

And finally, remember: the purpose of pepper spray isn’t to defeat your opponent but disorient him (or her) for a few moments while you flee. Which brings to our next self-defense method: 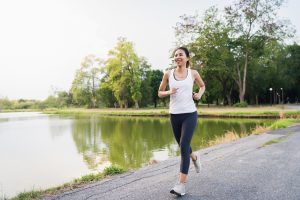 You may be rolling your eyes right now but hear me out. This isn’t talking about screaming and running away without a plan. You’re small, and that means your attacker will easily outrun you if you don’t give yourself a head start. Tactics 2 and 3 will give you the chance for a head start, but we’ll get to that.

It’s hard to believe but running from an attacker is something you should actually train for, whether it’s at the gym or just on a walking trail somewhere.

There are two types of training approaches you should adopt: train for sprints and train for agility. Training for sprints may sound deceptively simple, but there are a few things to strive for:

#1 – get your dead stop to full speed time (acceleration) down as far as you can without tripping. The faster you can get up to full speed, the better.

#2 – sustain your full speed for 100 feet and still be able to talk during and after running. This is important for you to be able to keep running and call for help and be able to explain your situation once you’re in a safe location.

Sprint training is great for if you’re running in a straight line. Odds are, though, you’re going to have to turn a few corners. This is where agility training gives you a leg up. Turning corners, if you can do it well and quickly, is a fantastic way to lose an attacker.

Here are a few tips on agility training:

#1 – Practice. This is something you can do easily at the gym or at home. Try setting up an obstacle course for yourself in a large space where you won’t do much damage if you fall and practice on it until you can do the entire course at top speed.

#2 – Turn corners. When you’ve gotten your sprinting training down, add some sharp corners into your course and practice taking them safely at top speed. This will be the most helpful part of your training.

#3 – Avoid looking behind you at all costs. It’s natural instinct to want to look behind you to see if you’ve lost your pursuer but you can’t run as quickly or safely if you’re not looking forward.

Pepper-spraying and then running are the two best methods you can do. They are also very easy to set up. If you’re lucky, you already have 2 functioning legs, and pepper spray is just click and a two-day wait from Amazon or any other online retailer (or the local sporting shop or gun store).

Next, we’ll discuss methods that are more time-consuming and requires more effort as well. They can also be dangerous if you’re uncertain of your skills. Which is why we recommend them only if you feel like you can devote the time and money necessary to mastering these techniques. If not, again, pepper spray and running will work best. So, without much ado . . . 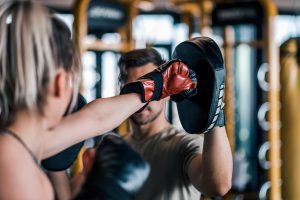 Yes, this may sound extreme, but having this training comes in really handy when you need to get that head start to outrun your attacker. The first aspect of training for an unarmed fight is mentally preparing yourself for the prospect of having to fight back. Know your local laws and envision yourself striking someone so that you feel comfortable and ready to take action if you need to.

From a physical perspective, one of the best tips for smaller women in unarmed fights is to take advantage of your size. Grappling is the one area in which being small is an advantage. The bigger your opponent is, the slower they are. You have the upper hand in agility, even without any extra training (training is still suggested!) It takes more energy and time for larger opponents to react, and you have time to get inside their defenses and get a strike in before they can respond.

Another good tip for smaller women is to rely mostly on kicks as a form of attack. Yes, punching looks cool and it’s likely your first instinct, but your punches are not nearly as strong as your kicks. Women carry most of their muscle mass and power in their legs, so use them to your advantage.

Take a kickboxing class to get familiar with different styles of kicks and build your strength. If you do get into a sticky situation where striking is required, go for one of the following areas on your attacker (in this hierarchy of success rates): groin area, back of the knees, stomach, ribcage. If you’re really out of options or you can’t get to any of these areas, a kick anywhere is better than no kick at all. The shock of the strike itself will stun your opponent for a second, even if it doesn’t do much damage.

For grappling, we recommend Brazilian jiujitsu. For striking, boxing or (as we mentioned earlier, your legs are stronger), muay thai or kickboxing. Again, your job isn’t to defeat your bigger attacker or score a knockout; it is to disorient the person so you can safely flee and call the cops! 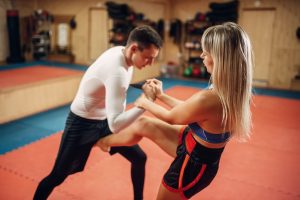 This method can be double-edged (yes, pun intended), especially if you don’t know what you’re doing. However, as a much vaunted “force multiplier,” it doesn’t get much better than a sharp knife. Stab then run. You’re not trying to become John Wick stabbing Common in the subway, OK. You’re stabbing the miscreant then getting the hell out of there ASAP.

However, it’s best you take lessons before buying a knife. One recommendation: if your city allows it (some, like Los Angeles, don’t), carry a fixed blade in a horizontal belt sheath (what knife enthusiasts call “scout carry”). Again, this will allow you pull your knife out as quickly as possible without the extra step of popping out the blade like with a folding knife. Most of these blades are short (less than 4 inches), but that’s OK too. You’re not here to win a knife fight but to stab and run!

Examples of such a fixed blade horizontally sheathed knives are the Clinch Pick and Kubey Hippocampi.

The Best Knife for Fighting in Confined Spaces 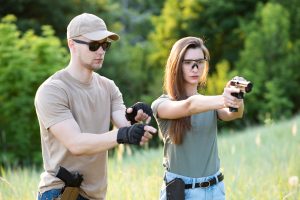 Finally, the queen of all weapons: the firearm or, more specifically, the handgun. Obviously, if your state allows you to carry concealed, get a concealed-carry license and carry a gun with you. And if you’re not familiar with guns, be trained. Doubly trained. Triply trained.

Plenty of people recommend high-tech semiauto pistols like Glocks, but I don’t for a variety of reasons, the top two being they’re easy to jam if you’re not holding them correctly (and in the heat of the moment, you might not be; this mistake is called “limp-wristing”) and they’re easy to have an accident with (due to their light trigger pulls—at least, popular striker-fired handguns like Glocks or the Smith & Wesson M&P Shields).

I recommend an old-fashioned revolver. Small and lightweight. A Smith & Wesson 642 Performance Center is a great example as are Ruger LCR’s—get the .38 Special models for both. Admittedly, not the easiest guns to shoot accurately, but if you pair it with a Crimson Trace Laser Grip, you should be able to hit anything within 10 feet of you, which is when you need it most. If the evildoer is far away, you can always run.

These Women Aren’t So Helpless ... When They’re Well Armed

You’re Small but Powerful If Prepared

Hopefully, this advice helps you feel better prepared to take the world on even though you’re on the small side. Most disadvantages can be overcome, and just because you’re small doesn’t mean you’re out of options, especially with today’s weapons. Use common sense (i.e., situationally aware), be smart, and be mentally prepared to use everything you’ve learned here if you have to. You’ve got this!