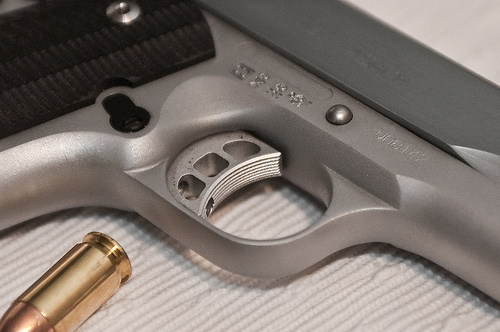 Photo by Theleom / CC BY

1911A1 or simply “the 1911” is one of the most famous handguns in the world. Designed by John Moses Browning for the US Army and accepted into service in 1911, this handgun has served in continual military service for over a century, and is a favorite with expert military shooters, law enforcement and private citizens alike. Its century plus production has put untold millions of these popular handguns on the market, and with few exceptions, they are all built to the same basic specifications. This has created a market for custom parts and one of the most popular upgrades is the trigger.

A stock 1911 trigger can be a rather uninspiring thing. Remember, these were designed to be shot from horseback if needful, and a stock trigger often reflects the military heritage of these guns—which is to say, they can be less than accurate. However, for a few dollars, and a little bit of effort, it is possible to get the right trigger. So, without further ado, let’s check out what an online gun site like Brownells has to offer . . .

Here are our recommendations for the 4 best 1911 triggers on the market: Wilson Combat is a well known manufacturer of custom 1911 parts and their triggers are extremely well regarded. If you are looking for the best trigger, you don’t need to go further than the Wilson Combat name. This particular trigger is built as light as possible, has a long finger pad for maximum comfort and trigger contact, adjustable over travel screw, and a skeletonized trigger pad. The trigger bow is made of high grade stainless steel and may require a bit of minor hand fitting to properly fit in your gun. For under $40, it is hard to go wrong with what is such a critical upgrade to your 1911, even if it’s for a budget 1911 like a Rock Island as seen in this video: Like I said, one of the greatest things about the 1911 is that parts for it are pretty much everywhere. The competition to make and sell the top-end 1911 trigger has brought some incredible bargains to market. This American-made trigger is a lightweight unit with a solid trigger pad, has the expected over travel stop screw, and is a drop in standard part that may or may not require minor fitting depending on your gun. With the 1911 renaissance that the shooting public is enjoying, it is now possible to find a quality replacement 1911 trigger for very little money. Another American-made piece vying for the title of best 1911 trigger for under 20 bucks. Lightweight aluminum construction with a rugged and stylish finish, over travel stop screw, and either a solid or skeletonized trigger (to remove weight), and of course drop in ready. The main difference between this trigger and the one above is mainly you can get the three-hole, lighter option. For practical purposes the units are about the same. Find the one that best matches your gun, and run with it. At best, a little minor hand fitting to your gun, and you’ll have a great new trigger installed and improving your shooting in no time flat. Similar to the Combat Ultralight, this too is one of the best 1911 triggers you can find. The Caspian Arms 1911 Trik Trigger is a good mix of both style and function. The Trik trigger does sport a unique look, especially when it comes down to the skeletonization in the trigger. This is a flat trigger, and a flat trigger does reduce the length of pull for many shooters with smaller hands.

This makes the gun way more comfortable to shoot and does give you more leverage and control over the trigger. The trigger is made from stainless steel and precision-machined for a smooth pull. The Trik Trigger works with the Commander, Government, and Officer sized 1911s.

What Makes the Finest 1911 Trigger?

The 1911 trigger is a deceptively simple part. Like all triggers, it is meant to depress the sear, which releases the hammer, which fires the gun. Basic mechanics there, but like with all moving parts, there is room for improvement. One of the first things people try and do is get a lighter trigger. Now the weight difference in such a small part is negligible, but for some people, every bit of saved weight is important and even noticeable. To that end, we wind up with triggers that feature aluminum pads, and skeletonized construction. Plus, lets face it, a skeletonized trigger looks cool. It has never been quite my thing, but most 1911 shooters I know enjoy them. It is a fast way to demonstrate that one has put custom parts in their gun, and many people enjoy them.

The best 1911 triggers will be nearly drop-in. Every gun is going to be slightly different, and there may be very minor differences that affect how a part fits and interacts with other parts. To that end, you want a trigger that is pretty much right on, and well within the tighter range of tolerance for spec, but may require minor tweaks to properly fit. That is quite fine, and the mark of a part that has now been fitted to work specifically with your unique gun. One hundred percent drop-in parts have to be loose enough in tolerance to always work, and that will cost you in the accuracy department. Better a little bit of fitting than none at all.

And you want to have an over travel adjustment. Over travel is the amount of free movement after the trigger engages the hammer. Some people like a nice long trigger pull (which I personally favor), while others like a short, crisp let off. The over travel screw sets that, and gives you a customized trigger pull that suits what makes you the most comfortable. When looking for the best 1911 trigger, make sure it is adjustable, and you’ll find your shooting rapidly improves. 1911 triggers are not some arcane mystery. People have been upgrading them for over a century. We found some of the best ones for you to pick from. Enjoy!