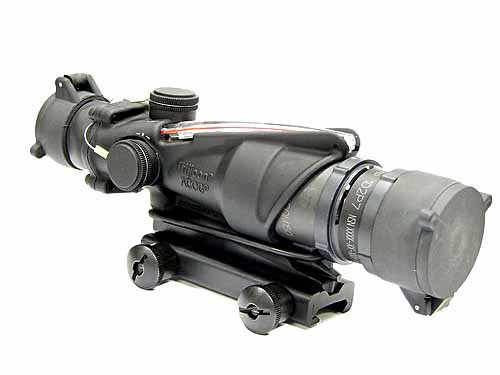 get an ACOG for SCAR 17’s? Well, I’m a little biased when it comes to rifle optics. If you ever ask me, “should I get an ACOG or a . . . ”, I will immediately say ACOG. I used an ACOG for five years as a Marine, and in combat. It’s the greatest combat rifle optic on the market period.

If you are rocking a SCAR 17 you are likely tempted to toss an ACOG on top. The SCAR 17 is a long range rifle that’s still useful for close quarters combat due to its lightweight and semi-automatic nature. Choosing an ACOG for the SCAR 17 means you have to research a model that’s designed for the .308/7.62 NATO round. Luckily, Trijicon offers you multiple options for different roles your SCAR could occupy, and we’ve gathered some of the best. But first, a quick reminder:

You’ll hear me mention this several times. This concept was invented by the founder of Trijicon, Glyn Bindon. It’s a two eyes open shooting style that is designed for magnified optics at close range. With the dominant eye looking through the optic and the non-dominant eye open, the optic basically becomes a red dot. This makes a magnified optic a dual purpose device. This can be used with some but not all ACOGs. Now, with that out of the way . . .

Here are our recommendations for the 4 best ACOG’s for SCAR 17 rifles on the market:

The Traditional ACOG for SCAR 17 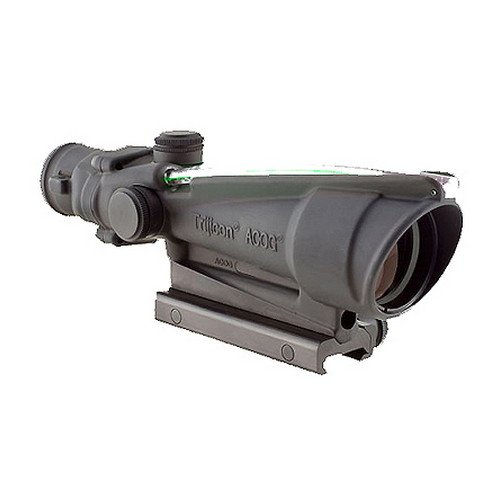 This ACOG is the traditional all around money maker. It’s traditional as both an optic and in an ACOG type of way. This 3.5 power fixed power optic is designed for short to medium range and can utilize the Bindon aiming concept for extreme close quarters. It utilizes a battery-free design that makes use of tritium and fiber optics to create a solar powered red reticle. This reticle is incredibly bright, and if it’s too bright, a layer of tape over the tritium and fiber optics will work wonders. The reticle is designed to adjust its brightness level as the ambient light changes (see full specs).

The crosshair design is interesting and dynamic for the SCAR 17’s. It provides a traditional reticle most of us are used to, meaning there is less time required to learn the reticle. It still features Trijicon’s famed bullet drop compensator that’s designed around the .308 caliber round the SCAR 17 fires. This allows shooters to reach out to 1200 yards with relative ease. This system is proven and reliable with the United States military and is responsible for the increased accuracy our troops had during the War on Terror.

The Trijicon ACOG 3.5 x 35 provides a very clear view and Trijicon only uses the highest quality glass in their scopes. The ACOG is a superbly powerful and rugged optic that is designed to hold up to the rigors of warfare, and with this scope, you’ve likely found the best ACOG for SCAR 17.

The Jack of All Trades ACOG for SCAR 17 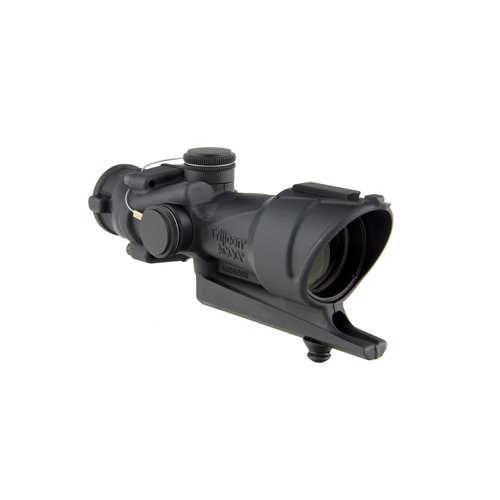 If you’re a veteran like me, you know the 4 x 32mm version of the Trijicon ACOG. This is what the United States Marine Corps uses, as well as several units in the Army and Air Force. The 4x was found to be the best compromise between a marksman’s needs and a door kickers needs. The 4 power is popular with troops that allow them to reach out and touch the enemy beyond what any iron sights can do. This optic is compatible with the Bindon Aiming Concept.

On the SCAR 17 this allows the user to engage out to 800 yards without issue. In fact, the included crosshair reticle features a bullet drop compensator out to 800 yards. If you do your part behind the gun, it’s not difficult to strike targets at those ranges. The glass is crystal clear enough to allow you to see that far too.

One big difference you’ll notice on this optic is the lack of a fiber optic and tritium component. This scope does use batteries to power the reticle. Thankfully, the reticle is glass etched as well. The benefit of this is that eventually, the tritium and fiber optics will eventually wear out after 15 years, and this will not happen with a battery powered optic. This ACOG also has the option of a small set of iron sights attached to the top of the optic for close quarters fighting.

I Like to Keep It Light ACOG for SCAR 17

One of the biggest benefits to the SCAR 17 is it’s considerably lighter than other 7.62 rifles on the market. If you are looking to preserve that lightweight nature, it makes sense to keep your optic nice and light. The Trijicon ACOG 3 x 30 is a minimalist design. This smaller, lighter optic is better suited for SCAR 17s being used for close quarters combat or even heavy metal league of three-gun competitions. The SCAR is a multi-mission weapon, so why not utilize a multi-mission optic?

Sure, the ACOG 3x30 isn’t going to squeeze out every drop of range the SCAR 17 can use, but it’s going to be easier to use in that sweet 300 yards most fighting takes place in. As a comp rifle, anything beyond 3 to 4 power is kind of useless since most 3 gun competitions aren’t going beyond 300 yards either. This optic doesn’t limit the SCAR 17 to 300 yards, however. The built in 308 ballistic compensation reticle goes out to 600 yards.

The smaller profile and lighter weight help keep the SCAR 17 lithe and light. In close quarter combat, the Bindon concept is going to extremely valuable and easier to use due to the lower magnification road. This is one of the best ACOG’s for SCAR 17’s in my book.

Light? The Pfft Give Me Range ACOG for SCAR 17 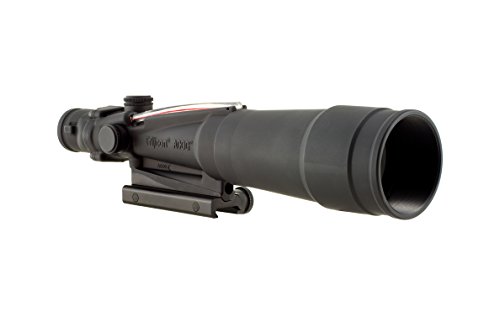 You want to go long, but think it’s not possible with an ACOG? I get it—the ACOG is traditionally thought of as a simple, lower powered combat optic. To a degree this is true, in most cases, but not in all. For you long-range ninjas, we have the ACOG 5.5 x 50

This is one of the bigger boys in the ACOG world (see full specs), and it’s a perfect companion for your SCAR 17. The first thing you notice is that this ACOG is considerably larger than most other ACOGs on the market. This is something you have to accept if you want to reach out and ring steel.

The 5 x 50 is equipped with the ballistic drop reticle that I personally love. It’s dialed in for the .308. It goes out to 1200 meters which gives you more than enough range for hunting, combat, or just spending a lovely day ringing steel.

Because Trijicon doesn’t play around when it comes to glass, you get a beautiful and crystal clear picture through the optic. This makes it a quality tool for scouting, and observation. This big beast is powered by the sun so you’ll never need batteries. The ACOG 5x50 is perfect for long range shooting, and just one of the best ACOGs for SCAR 17 rifles period.

The ACOG is a truly amazing optic. It’s designed for combat but fills so many more roles. It’s easy to use and incredibly effective. It’s the perfect multi mission optic for a multi mission rifle like the SCAR 17. Regardless of your ACOG choice, you can purchase with confidence. Take it from me, the ACOG rocks!