Photo by Program Executive / CC BY

the political turmoil, America is really a heck of a country. I’m writing this at 2am having just finished a cup of coffee, my cat is outside doing cat things, and like any real red-blooded American, I have a loaded AR-15 within easy reach in case some unlucky gangbangers decide to mess with me.

But this article isn’t about cats and AR-15s and gangbangers, unlucky or otherwise. This is about America and what makes us great, and nothing makes us greater than the fact that, for the price of a rusty used pickup, you can buy the same advanced optic that our soldiers use in all those global hotspots we see on Fox News (or, if you’re of the, ahem, other political persuasion), CNN, and MSNBC.

Yes, this article is about that rifle sight—Trijicon’s ACOG. It is one of the most impressive optics ever placed in the hands of a soldier, and you too can own one. Of course, there isn’t just one ACOG but a bunch of them so you got to filter down which ACOG is best for you—and for your wallet. You’d want the best ACOG scope for the money, and we have 3 right below to compare:

For those not familiar with the ACOG, the acronym stands for Advanced Combat Optical Gunsight. Built by Trijicon, the ACOG has spawned many a cheap knockoff, something we will not even give a second glance here. Instead, we are focusing on a compact 4x32 sight built of the highest grade aluminum, with precision engineered lenses, with dual fiber optic and traditional illumination, and calibrated for .223/5.56 rounds out to 800 yards. We are looking at a sight that will deliver uncompromising performance that, like so many American soldiers, you can bet your life on. When looking for the best ACOG for the money, choosing a basic model is sufficient for most people. As it sits, this model will give you a fantastic scope, and will be an optic to hand down for generations. A century from now, your descendants will pick up your old AR 15 rifle and look through this ACOG much as we now look down the barrel of an old Winchester 30-30, and it too will continue to function and serve. 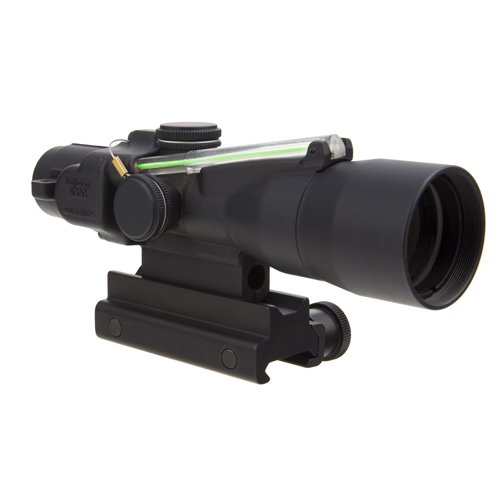 All of the ACOGs we are looking at here are illuminated with tritium vials. This mildly radioactive substance provides always on, battery free illuminated reticles, and is the heart of the ACOG system. At its price range, it is hard to argue against this being the best ACOG scope for the money. A 3x30 scope, and built with the insane combat proven reliability you demand from an ACOG, this unit combines good American know how and engineering with a proper love of (relatively) low prices. When running this ACOG you are also supporting an American business (Trijicon is based out of Michigan). Born from the battlefields of the Mideast and made for the American consumer, if you want the power of an illuminated and .223/5.56 calibrated 4x32 scope with the convenience of a built in red dot sight, this is the absolute best ACOG for the money. Not only do you get a legendary ACOG scope, but you get a built in red dot which allows you to quickly transition between long distance and close up shots. Ideal for sport shooters, hunters, police or just plain old fashioned, corn-fed Americans who demand the absolute best optics they can get for their AR style rifles, there simply is no better ACOG out there.

Why You Need an ACOG

You’ve got to love owning an optic that is illegal to send outside of the United States without government permission. The ACOG is so advanced, its sale is regulated by arms control and export treaties. That’s right folks, a scope so advanced that sending it to the wrong address is considered an illegal export of arms can also sit on top of your favorite varmint rifle or your home defense carbine. When I think about that I get goosebumps, because how many places in the world can you openly trade in high grade military optics, with nobody batting an eye?

Owning an ACOG is like watching a baseball game while eating apple pie with bald eagles screaming overhead. Buying an ACOG and mounting it on an AR 15 is a literal slap in the face to King George III, Kaiser Wilhelm, and Osama Bin Laden. And that guy with the funny mustache in the 1940’s too. In other words, getting the best ACOG scope is also the most American thing you can do outside of mailing in your tax return two minutes before midnight on April 15th.

There isn’t much to be said about the ACOG that hasn’t been said already. Imitators and outright forgeries abound (what youngsters these days call, “haters”), we’ve made sure you are buying legitimate ACOGs instead of ripoffs that undermine American jobs and steal our money. Every ACOG is built first to compliment military M-16 and M4 style rifles and built around military ammunition and military shooting distances. They are built for somebody kneeling in a filthy hole with the sound of explosions going off around them, with bullets whizzing by, and who absolutely must take a critical shot in order to bring themselves and the people they are with home.

So yes, they can run up to a several thousand dollars. Yes, they are rather single mindedly built mostly for assault rifles, and yes they are designed around a particular round and platform. But by golly they are amazing. And you need one. Or two. Mortgage the house and sell your car if you have to. Get the best ACOG scope and put it on your rifle. Why? Simply because you can. They are awesome.