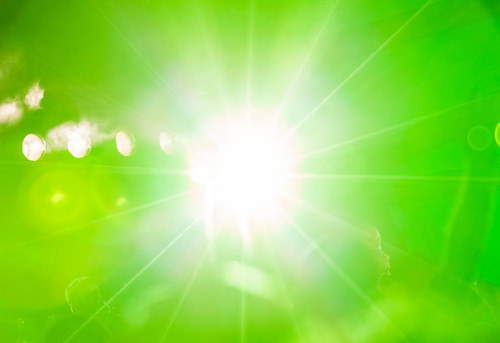 think of hunting with a light, you might think of the cliché of a couple of poachers with spotlights sitting in the woods gunning down deer out in the boonies, but the reality is, in many parts of the US there are ample opportunities to legally hunt animals with a light. Typically, these are species considered a pest by virtue of population size, and it is in the best interest of all to thin the population by any humane means. Enter night hunting.

A good hunting light makes it easier than ever to locate predators like coyotes when they are most active, and of course the classic “deer in the headlights” look applies here as well. Either way, night hunting is a popular way to hunt where legal, and there are a ton of lights out there to look over (and we go over what criteria you should look for in the best hunting spotlights after our recommendations). Anyways, we’ve waded through the good, the bad, and the ugly and found 4 great lights for yuo, from handheld to weapon mounted. Take a look! 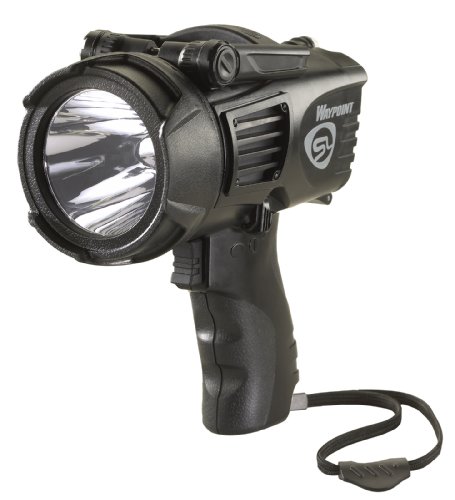 Streamlight is known for high quality weapon-mounted flashlights, so it’s no wonder they bring their years of experience in building combat proven lights to making a top-notch spotlight. This bad boy can off a standard 12v outlet or from four standard C-sized batteries, throws a bright 210 lumen beam off a specially designed parabolic reflector to get maximum range and intensity, and features a shockproof LED bulb with a 50,000 hour rated runtime. In other words, this is a hardcore little handheld spotlight. Get one for hunting or for your car emergency kit or to keep at home when the lights go out. This is a valuable tool and an affordable one too. It’s one of the best hunting spotlights for the money. 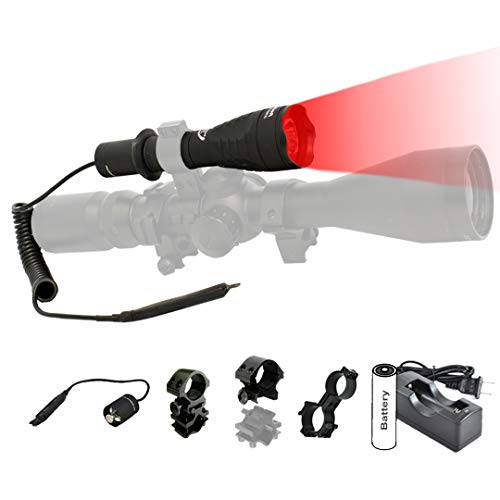 How about getting a nice red or green high intensity hunting lightthat mounts to your favorite scope? Great idea, right? This light (see full specs) is just the ticket for an intense night of coyote hunting. Featuring a powerful 300 lumen red or green light, rechargeable battery, rings to mount on a standard 1” rifle scope, variable power output, rugged titanium finished steel bezel, a 273 yard range, and military grade construction, and a remote pressure switch, this is one tough light. Personally, it’s my top choice for night hog or coyote hunts, and at this price, there is little reason not to invest in this tough little number. 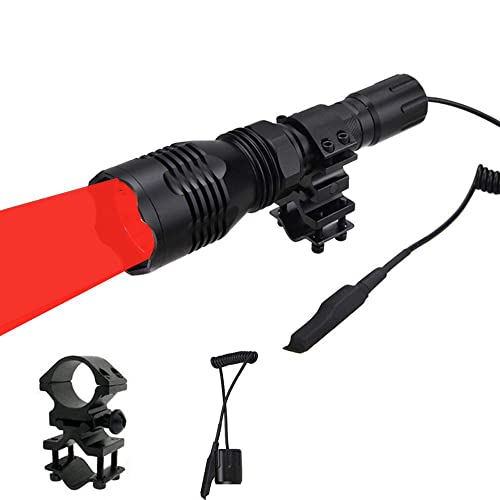 On a budget? Spent all your money on premium ammo and building the ultimate varmint gun? Forgot the light? Got some spare dough in your pocket? Well, here is a powerful and elegant solution. The WindFire waterproof tactical flashlight throws a powerful 350 lumen red beam that cuts through the night out to 250 yards. Comes complete with barrel mounting hardware, a rechargeable battery, remote pressure switch, and can even be used as a standalone flashlight when not mounted on your rifle. The absolute best spotlight for hunting at night that you can get on a budget. Might even be worth getting two; one for the rifle and one in case an upright, two-legged coyote decides to break into your house. 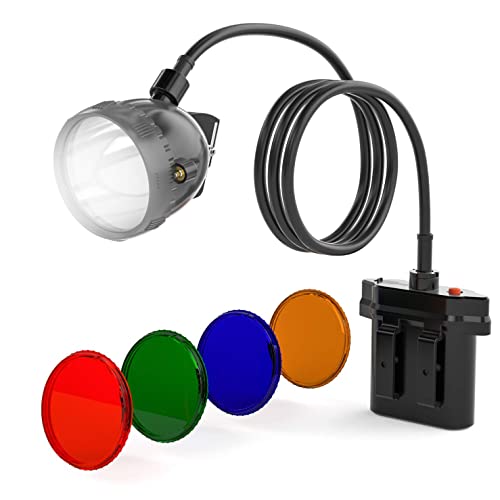 Rounding out our run on the best hunting spotlights, we think this headlamp is a fantastic choice. Nothing beats throwing a powerful beam of light exactly where you are looking. This feature-rich and wallet-friendly light (see full specs) comes with four different color filters, a high power, long life battery, 1.2 meter cable so you can mount this light anywhere on your person, a powerful 10w Cree LED, four brightness settings, and attaches to most any hat designed to take an attached light. For hunting, construction work, walking at night, or most any application where a powerful headlamp is useful, this is the light for you!

The Low Down on Hunting Spotlights

Hunting lights are typically glorified flashlights. What sets them apart from other lights is their more rugged construction, light color, and sometimes the ability to mount on a weapon or hat. You want a hunting light that can stand up to the rigors of hard outdoor use, and still turn on as long as the battery has a charge. The predator-hunting spotlights will mount to your rifle or hat, while others prefer a handheld spotlight.

Hunting lights will be mostly (legally) used on predator and varmint hunts. If you want to play Bubba spotlighting a deer, we don’t want to hear about it! The needs of a raccoon, coyote, or hog hunter neatly overlap to the point where you could use the same gear for any of it.

Typically, night hunting involves going after predator animals when they are most active and catching them in the act so to speak. A good hunting light will help you find your quarry by illuminating their eyes or lighting them up in a tree. The best hunting lights are red or green, as this preserves your night vision, while still serving as a useful and effective light. After all, nobody wants to be in the woods and blinded by their own light.

Ultimately, choosing the best spotlights for hunting comes down to power output and batteries. Some lights require special rechargeable batteries, although spares can be had, and they typically have an output of up to ten hours, which ensures a long hunt. When in doubt, carry a spare charged battery and you are good to go.

Power and range of beam are two other topics, both of which have resulted in much spilled ink. I wouldn’t bother with a light that couldn’t throw a solid beam at least 150 yards, and many will do two or three times that with ease.

The focus of the beam is important too, as you don’t want too narrow, nor too broad a beam. When in doubt, go into a dark room and turn on the light to see for yourself how it works. After that, it’s just a question of if you are mounting it on top of your rifle scope (I like this method) or on the barrel of your rifle (tidier but more muzzle heavy) or on your person. The best hunting spotlight will bring joy and success to your hunt, and should be carefully studied on before buying.