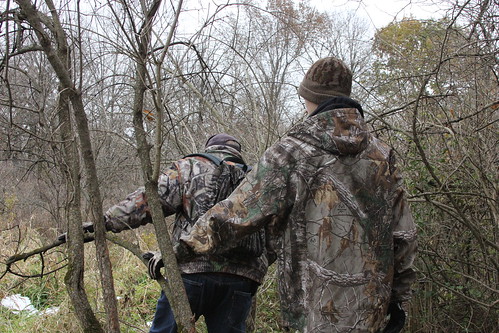 Photo by Brad Covington /CC BY

camo for hunting makes sense since the military invests a lot of time and money in developing practical camouflage uniforms. That being said, they don’t always work, but for the most part, they do create effective patterns that translate well into civilian use. Most average people use camouflage in the pursuit of hunting, so with that in mind, I’ve gathered a few of my favorite military camouflage patterns you can use.

These are our recommendations for the 4 best military camo for hunting on the market: 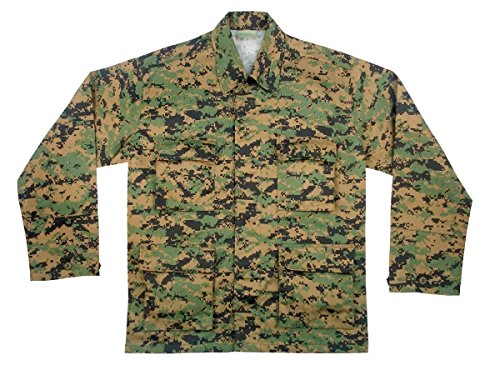 MARPAT, or Marine Pattern, camouflage comes in two flavors: woodland and desert. For the United States and hunting, I’m sure woodland makes more sense, and that’s my specific suggestion. MARPAT woodland is an incredibly effective pattern pioneered in 2001. It was slowly introduced into the Marine Corps from 2002 to 2005 and remained the Marine Corps camouflage of choice. It’s highly effective and designed as a digital camouflage.

The Rothco BDU (see full specs) is not a proper USMC blouse but is designed after the older four-pocket BDUs. This old school BDU design still remains a favorite for its utility-driven design. The four large pockets don’t just give you plenty of room to carry things, but an easy way to organize the important gear. You don’t have to fish around in pockets to separate your compass from your turkey call. The reinforced elbow positions also make it safe to assume a lying down position without worrying about wear and tear.

The four-pocket design also gives you access to your gear in a seated position. There is no need to stand and create a movement to retrieve this or that item from your pants pocket. The BDU jackets are comfortable and are a medium weight. It’s perfect for the southeastern United States and will allow you to blend in effortlessly while remaining plenty comfortable. 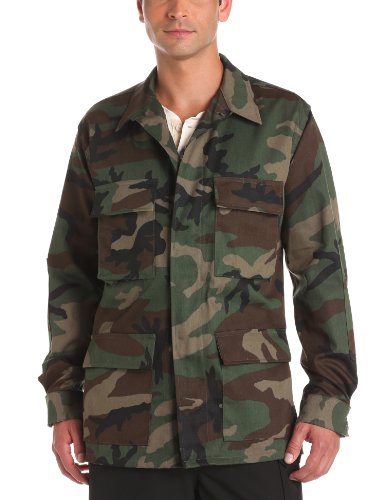 The classic woodland BDU camouflage is so popular and so legendary that it’s still in use to this day. The Famed MARSOC Raiders are still seen wearing this old school camo pattern. Simply put, its a very effective pattern that continues to be used for a reason. The simple nature of the camo makes it very effective. The splotch design makes it effective at breaking up the silhouette of the user and blends into almost any woodland environment.

This old school camo pattern served for decades, which is an impressive timeline when you see how often modern military forces are switching to different camouflage patterns. Propper is a legendary company, and they make uniforms for federal agencies, state agencies, and even law enforcement officers around the country. The Propper pattern is the traditional four-pocket BDU. As we mentioned before, the benefits of a four-pocket BDU are numerous, especially when it comes to hunting applications. These pockets even incorporate drain holes to allow them to let water escape should you take a fall.

The Propper BDUs are machine washable and sewn to military specifications. You get a chest pen pocket, as well as two-piece double-reinforced elbows for extreme durability. This old school pattern is well proven-and still beloved by many for a reason. Needless to say, it’s also among the best military camo for hunting around. 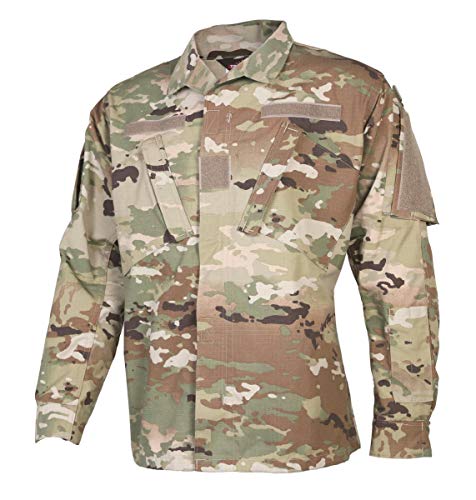 If you want ultra-modern camouflage, then the OCP is the latest and greatest in camouflage. OCP stands for the Operational Camouflage Pattern and is the latest pattern being used by the United States Army. The Tru-Spec coat is a bit different than the Army issued coat, but is still an ultra-modern design that’s rough, tough, and made to work. The OCP pattern is new but is proving to be quite efficient. It’s the closest you can get to a universal camouflage pattern that’s reasonably effective.

The Tru-Spec coat (see full specs) uses a two pocket design with the pockets slanted at an angle for easier access. This slanted design allows for less movement and an easier reach. The shoulders also have small pockets built-in for easy access to your gear. Just like the four-pocket BDU design, you can reach your gear easily while seated, kneeling, or even when lying down. Minimizing movement is important to a successful hunt, so the Tru-Spec shirt is laid out perfectly for hunting in an odd position.

The mix of both an effective camouflage and modern layout is most certainly going to appeal to hunters. The design is also quite affordable, and Tru-Spec has an excellent record of success with its uniform gear. For the money, this is among the best military camo for hunting period. 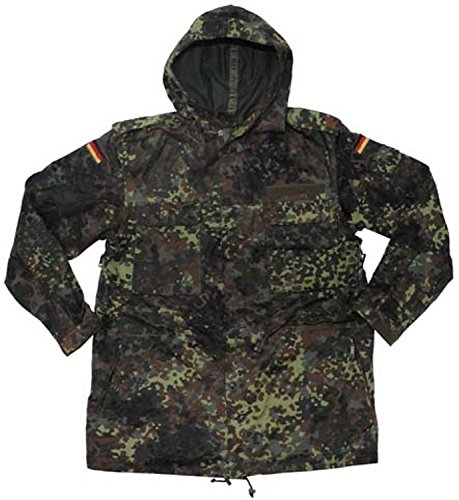 So far, we’ve only talked about US military camouflage patterns, and it seems like we should have at least one effective and original foreign camouflage. The Flecktarn pattern is a modern take on what Germany has used for camouflage for generations. The Flecktarn pattern is better suited for the Northwest with its darker colors but is still an effective pattern at breaking up the silhouette and profile of the hunter.

The ZFlecktarn is one of the first camouflage patterns to use a splotchy, digital style pattern to disguises its wearer. This effective pattern makes you nearly impossible to see when sitting still. The chest has two large square pockets for gear storage and two hand pockets that are similar to a hoodie pocket—perfect for not only gear storage but keeping your hands warm. The hand pockets zipper shut, so no matter what, nothing is getting lost.

This heavy parka like design is much better for the colder seasons than spring turkey season. It’s long and will cover the butt. The sleeves seal tight to prevent body heat from escaping, and the added hood adds some warmth as well. This should be added to any list of the best military camo for hunting—even if it does come from Deutschland.

Military Camo’ed Up for Hunting

Military camouflage is often a very efficient means to disguise yourself while hunting. It’s also typically much cheaper than hunting camouflage– as efficient but can cost much less than popular hunting brands. While wearing Gucci camo is cool, wearing military camo is efficient. Camo isn’t something you are supposed to be seen in any way, you know. Good luck!