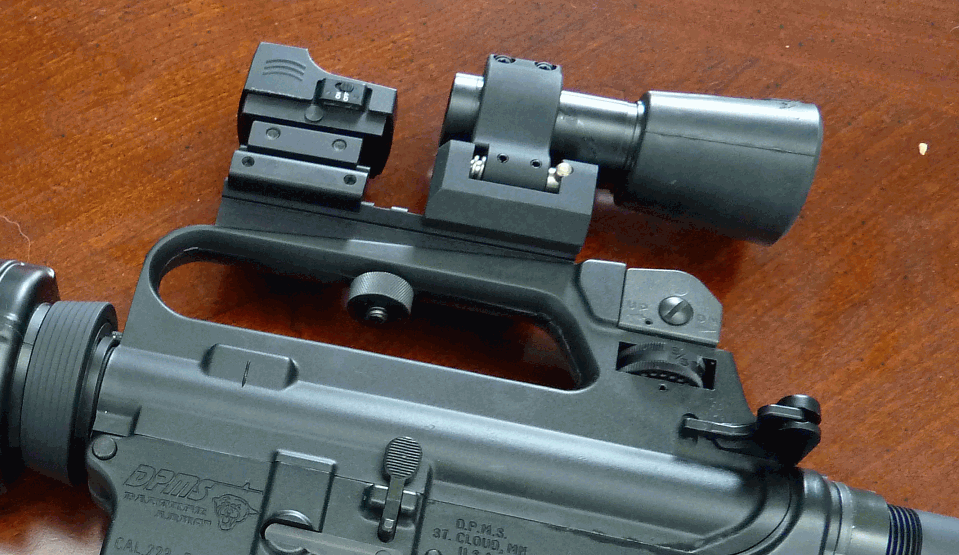 Photo by Michael Tefft / CC BY

have become increasingly popular, especially on AR 15 style rifles and other tactical and sporting semi automatic carbines. However, while a red dot is a rather nice sight, it offers no magnification and is little more than a glorified set of iron sights. However, due to their popularity, it didn’t take long for folks to figure out ways to fit magnifiers to them, turning a zero magnification red dot into a low powered scope. These magnifiers have become very popular, and many people will buy a red dot and magnifier at the same time. Obviously, the market is flooded with red dot products, so we took the time to find the 4 best red dot magnifiers for you to look at. 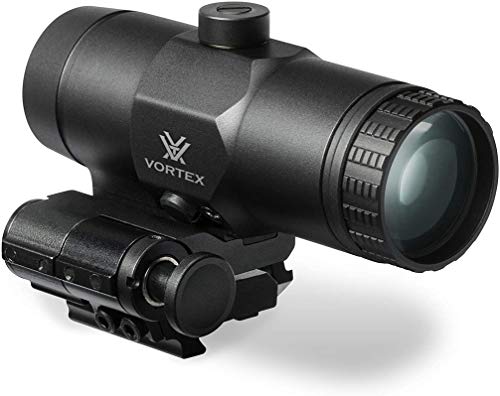 Vortex makes some of the best red dot magnifiers as evidenced by the reviews of this product. Designed to mount behind most popular red dots and flip out of the way on demand, this magnifier features fully multi coated optics for optimal light transmission, adjustable 1 to 3 power magnification, fog proof nitrogen gas purged body, and a waterproofing O ring to keep out water and dust. If you’ve gone through the trouble of installing a high quality red dot on your rifle, you owe it to yourself to put a high quality red dot magnifier behind it. 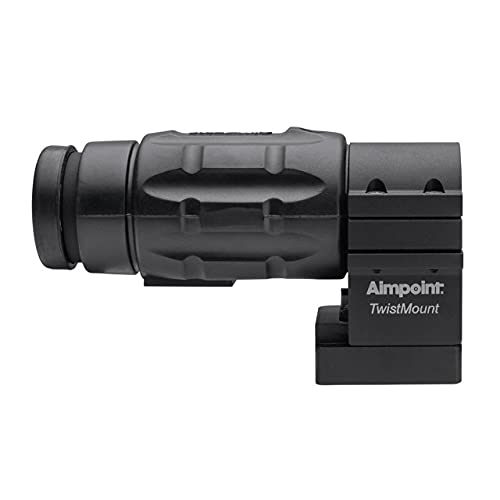 This one is built with the Aimpoint line of red dots in mind. Designed as a rock solid 3 power magnifier, it features a rugged waterproof body, fully coated optics, and the sort of refined, compact design you’d expect from Aimpoint. Quickly turn your favorite Aimpoint into a top shelf optical sight with the addition of this magnifier. Combined with a flip to the side mount, you’ll have the perfect setup for hunting, competition shooting, or a hard working tactical carbine. 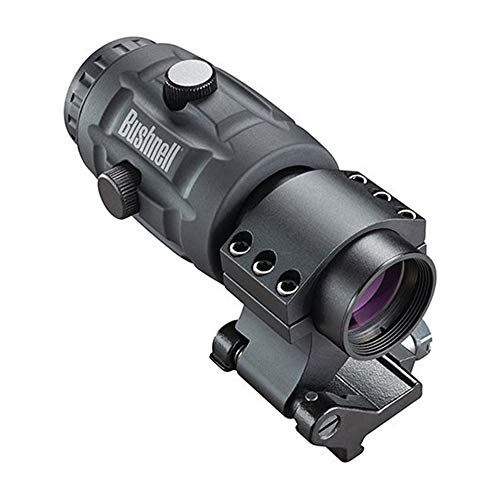 There is no denying the rugged simplicity that makes the NcStar one of the best red dot magnifiers out there. Simply mount the Bushnell magnifier behind your red dot, adjust eye relief to suit yourself, and it’s done. Built like any high quality scope, this unit features fully coated optics, three power magnification and is built to provide long lasting, rugged service. If you need a budget magnifier, or simply want a good solid unit at an affordable price, this is one to consider.
Bushnell 3X Magnifier - One the best options under $200! 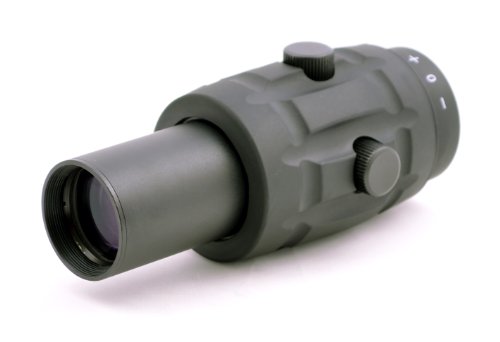 Another three power fixed magnifier to consider, the TMS is a fundamentally basic magnifier that gives you all the advantages of a low-powered rifle scope combined with the ease of use and advantages of a red dot. Certainly one of the best red dot magnifiers in its price range, this magnifier has a rugged aluminum body and a generous rubber armored gripping area for fast focus adjustment. Now you can turn your red dot into a reliable scope without breaking the bank.
Aimpoint pro, Vortex swing mount, TMS magnifier, KAS backup sight

Once you’ve found the best red dot magnifier, odds are you’ll need a base for it. No matter how you slice it, a red dot magnifier boils down to being nothing more than a small and rather compact scope, and like any scope it needs something to mount on. Typically, a red dot magnifier is mounted to flip over and out of the way when transitioning from a magnifier to the regular red dot. Now that you’ve got your magnifier, take a look at a few bases.

Sightmark makes this fine little quick detach base, that can be removed with a single throw lever: 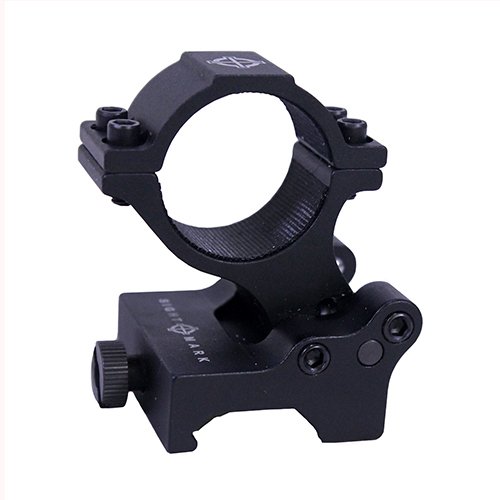 This offering from TMS is worthy contender for a good magnifier base too: 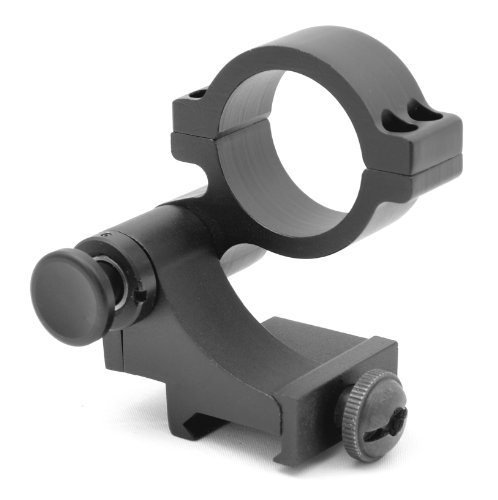 What’s With Red Dots and Magnifiers?

Say you have a rifle and a red dot, which is probably why you are reading this in the first place. And say you don’t have Superman vision, which means you really want to enjoy the advantages a red dot offers but probably can’t see a target clearly past about a hundred yards or so, which is sadly the case for a lot of us. Fortunately, we live in a capitalistic society that quickly finds a way to profit off of problems like this, which gives us things like magnifiers for red dots, and one more gun accessory to hide from the wife (or husband—let’s not get too sexist here!).

A red dot essentially replaces iron sights, and offers a similar range. Because it is a holographically projected image, the red dot offers many great advantages over basic iron sights and is arguably quicker to get onto target. This is especially important for tactical, law enforcement, and home defense weapons. Amusingly enough, the only rifle I have with a red dot isn’t my AR 15 but rather my Ruger 10/22, and yes, I’m going to put a magnifier behind it. I knocked it over and broke the rear sight, stuck a red dot I had lying around on it, and found I liked it a lot better, and even hunt grouse with it, which is why I am planning to put the best red dot magnifier I can find on it.

Most magnifiers put a three power optic behind the red dot, and this puts us squarely into that oddly effective world of optical sights. We’ve written elsewhere about low power scopes, and the same principals and lessons apply here. Magnify the target a bit, and watch your close to medium range shooting improve. For hunting, a red dot magnifier will give you a chance to reach out a bit further than you could on irons, but also lets you quickly transition between a red dot and a magnified red dot by simply flipping the magnifier out of the way when not needed.

For tactical and law enforcement, the same ideas apply here. A carbine with a red dot gives you an ability to quickly engage a target, and for short range use is ideal, but flip your magnifier over and you can take a more accurate shot or a longer range shot, something that may be critical when lives are at stake. The cost of a the best red dot magnifiers are nominal when placed alongside the cost of a red dot, and the added benefits of being able to enjoy the best of both worlds when using your rifle. If you are running a red dot, there is no real reason to not install a magnifier. It’s simply a far too useful bit of kit not to have.