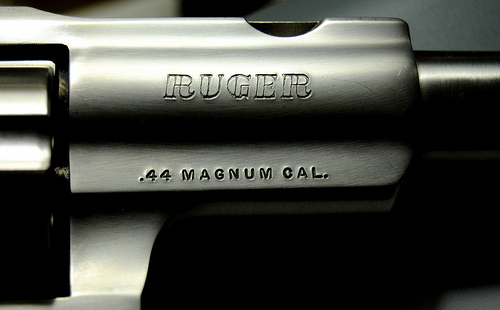 get a red dot for a .44 magnum revolver? Well, .44’s are most commonly used as hunting or animal defense weapons. In both roles, accuracy and speed are very important and what lends to shooting speed and precision at the same time? Yup, a red dot sight.

A .44 magnum is a powerhouse of a gun so it needs an optic that is capable of keeping up with and resisting recoil forces. You’d also need an optic that’s lightweight, small, and easy to use. A .44 revolver is a serious weapon and the precision a red dot offers versus iron sights has to be seen to be believed.

Here are our reviews of the 4 best red dot sights for .44 magnum revolvers on the market: 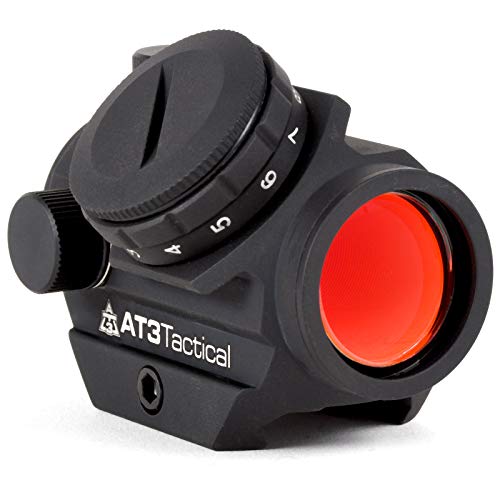 On the larger end of handgun red dots are mini tube models like the AT3 Tactical RD-50. This micro red dot mounts easily to your standard large-frame revolver but will need a Picatinny rail mount.

The AT3 red dot is a small dot that also superbly lightweight and well suited for a handgun. The AT3 Tactical is quick and easy to get on target, and the small 3 MOA red dot is easy to use. The dot offers quick a bright red dot that’s easy to put on target and very easy to pick up quick, fast, and in a hurry.

The AT3 red dot does offer 11 different brightness settings designed for daytime use. The lenses are multi-coated for both clarity and anti-scratch protection. This level of light gives you a nice and clear picture that makes the dot glow clearly against the clear and consistent lens. The AT3 Tactical red dot uses a single CR2032 battery which provides you with up to 50,000 hours of battery life. That’s insanely impressive, and you can leave the red dot on and hike and hunt without worrying about the battery.

The AT3 Tactical red dot is a well-made and valued priced optic that’s perfect for hunting and animal defense. The AT3 red dot is made from aluminum and sealed to be waterproof, and it’s shockproof. Needless to say, a sight being shockproof is important on a revolver chambered in .44 Magnum. Bar none, this is one of the best red dot sights for .44 magnum revolvers. 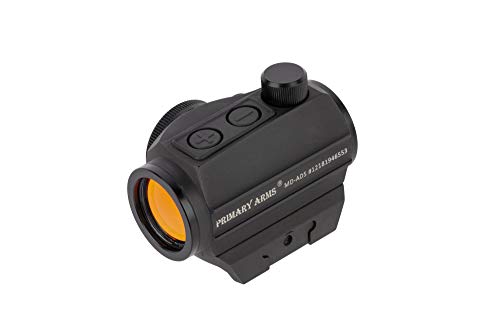 Personally, this is the model I use for hunting. The Primary Arms red dot is a very small and crisp 2 MOA dot that’s easy to see and focus on. Its small size makes it easy to take careful aim, especially at a distance. This allows you to exercise proper shot placement on an animal, which means a humane and ethical kill.

The Primary Arms Micro Red Dot comes with 12 different brightness settings that allow you really dim or amp up the dot’s brightness level. The Primary Arms Micro Red dot has 50,000 hours of battery life from a single battery so it can be left on literally for years. The dot is unlikely to ever die on you, as long you remember to change the battery a couple times a decade.

The Primary Arms Micro Red Dot weighs 4 ounces, so bulk isn’t an issue. It is also very affordable and easy to use. The controls are large and oversized, which make them perfect for quick use and adjustments. The brightness controls are ambidextrous, and the optic is shock, water, and fog proof that’s even submersible up to 2 meters.

The Burris Fastfire 3 is a micro red dot optic designed for handguns. The 8 MOA reticle makes it very large and very quick to pick up. This is the perfect optic for bear defense in the backcountry—or an equally hairy and big human attacker.

The big dot (see full specs) teamed up with the auto adjusting feature of the Burris Fastfire 3 is a great combination. It means the dot is big and bright when you need it to be. This makes it very quick to see, and this could be very important if a bear (or bear-like human) rushes you.

Picture this: 1,000 pounds of teeth, fur and muscle is charging you. How fast could you accurately put a shot on target? I’d bet you’d be a lot faster with a red dot like the Burris Fastfire 3 with an 8 MOA dot. The big dot is quick to pick up but small enough to be accurate and precise.

The Fastfire three does have three manual brightness settings on top of the automatic setting. The auto setting does work very, to be honest, and it never disappointed me. The design is rock solid, and you even change the battery through the top which means no need to dismount it and lose zero just for a battery swap. This should belong on any list of the best red dot sights for .44 magnum revolvers period.

The Trijicon RMR is the classic handgun optic. It wasn’t necessarily designed for handguns, but it just happened to be small enough to work on the majority of them. The RMR is a Ruggedized Miniature Reflex Sight and is easily the toughest on the market. The RMRM is available in a variety of configurations and designs with a number of different reticle sizes. The 6.5 MOA reticle is my preferred model.

The optic (see full specs) is a great mixture of both size and precision. This makes it quick to pick up for rapid, close-range shots, as well as easy to use for proper shot placement on more distant targets. The design incorporates eight settings including 2 for night vision, and one super bright setting for close-quarters use.

The Trijicon RMR is a very clear optic with a crisp and easy to see the reticle. The reticle itself is brilliantly crafted and is extremely crisp and precise. The RMR is the optic to beat when it comes to close-quarters shooting with a handgun.

The .44 Magnum is a hand cannon that’s also a literal blast to shoot. Choosing a red dot for it is tricky, so make sure you look at models that can take the recoil and power of a .44 Magnum. The above listed are perfect for hunting and animal defense, as well as shooting and precision groupings. They can take the recoil, but the real question is can you? Good luck!