talkies have almost become as commonplace as cell phones, maybe because cell phones also have their own set of limitations. But where these limitations end, the walkie talkie begins.

Also known as two way radios, walkie talkies operate like cell phones in that they can receive and send signals through the air. But unlike a cell phone, walkie talkies do not quire a tower in order to function, so you can use them wherever and whenever you want.

It is for this reason that walkie talkies have become enormously popular among hunters, to the point that radio manufacturers are now making walkie talkies designed specifically to the needs of hunters. Whenever you see camouflage colored walkie talkies at the store, they are likely ones that have been built to the needs of a hunter. The issue isn’t in finding a walkie talkie designed for hunting; it’s in choosing the right one out of the several that are on the market!

Here are, in our opinion, the 4 best walkie talkies for hunting on the market: 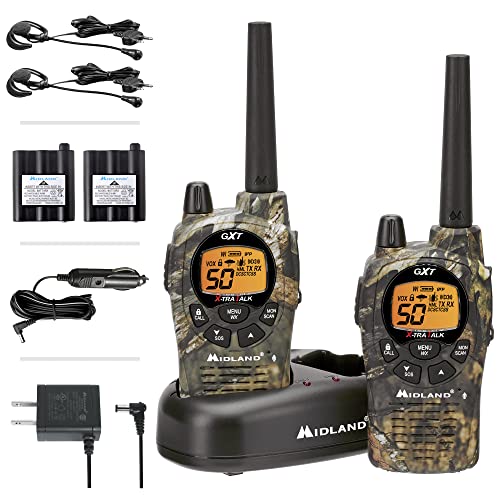 When you see a walkie talkie covered with a mossy oak color, you can only assume that it’s made specifically for hunters. In this case, you would made the right assumption. The GXT1050VP4 from Midland can provide you with a longer range than the Talkabout from Motorola, and also comes equipped with weather updates and alerts. Plus, it’s powered by the most common and some of the most cheapest batteries available: AA. This should be on any list of the best walkie talkies for hunting. 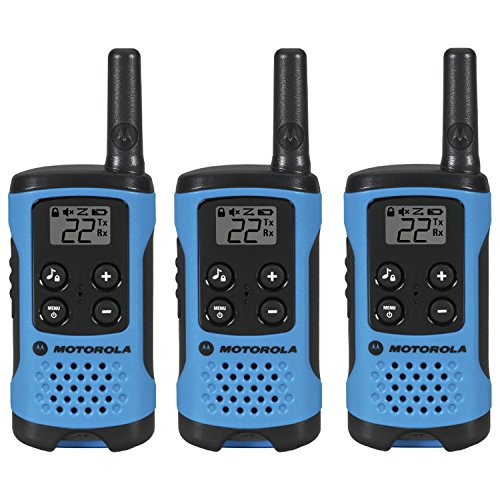 If you are looking for a budget friendly set of radios the Motorola T100TP is for you. This is an exceedingly simple set of three radios that are the perfect close range communication device. When you consider the budget based priced you begin to understand why they are the best deal out there. You get 22 total channels available that use a simple interface to swap through. The Motorola T100TP is also the perfect set of radios for the hunter that likes things simple. The system is extremely easy to use, and has a small screen that shows the basic information needed. There is nothing fancy here, and that is completely acceptable. The system gives you 18 hours power off three double A batteries. Even with this affordable, simple set of radios you are getting 16 miles range. 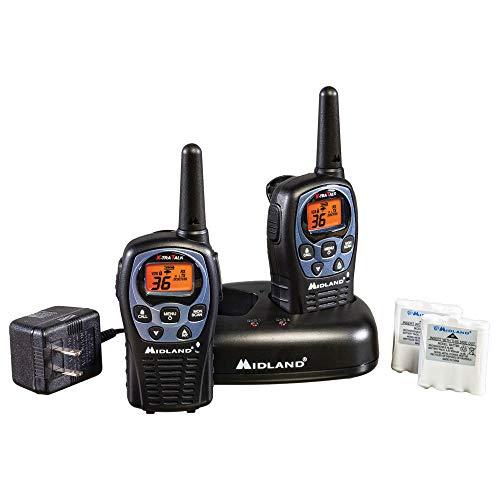 The LXT650VP3 from Midland is the pinnacle of the company’s engineering, which has already been well known for their high tech designs. This model, one of the best walkie talkies for hunting, offers a lot of performance for its relatively compact size, and should give you a reliable performance for many years of hunting and outdoor pursuits. With a 26-mile range, the LXT560VP3 receives its information from the NWS (National Weather Service) and gives you thirty six separate channels. Simply scan each of the thirty six channels for any activity. The radio will scan each of these channels and resume a scan after stopping on an active channel, meaning that there’s preciously little for you to actually do in order to use it.

If you are looking to combine simple, affordable, and reliable, the Floureon Walkie Talkies are for you. These are somewhat short-range walkie talkies but for hunting you typically do not need 20 kilometers worth of range. You always pay for that extra range, so if you are hunting in generally the same area these walkie talkies will work for you. They have a 3km range when in forest environments and a 5km range in clearer environments. The walkie talkie also has a illuminated LCD screen and the system even comes with a built in LED torch for emergency lighting requirements. The radios run off simple double A batteries and generally sip at the battery while in standby mode. The radio is equipped with a 22 channels and you get an autoscan function. At the price it comes in at this is a hard deal to say no.

What Should Your Walkie Talkie For Hunting Have?

There are many options in the radios of today, including but not limited to weather alerts and interference elimination. None of these elements are necessarily crucial, but some such as an emergency button that can send out an SOS signal are an excellent safety feature and strongly desired by many hunters. Most walkie talkies for hunting also often sell with a camo paint job such as the mossy oak on some of our recommendations; this certainly isn’t a requirement for a good hunting walkie talkie, but it does help to preserve the ‘feel’ of hunting especially if you’re interested in that.

But there are also certain elements to walkie talkies that are necessary. The most obvious one should be an extended battery life. Hunting trips can last more than just a few hours. Some of us can be out there for days or even weeks at a time, and some of those trips may be without the ability to recharge. Do you want a radio that is going to die down on you while you’re out in the middle of nowhere? Probably not, especially if you’re hunting with other people. It’s not only critical for you to have a full charge before embarking on your hunting trip, but for that charge to last as long as possible.

Second to battery life would be range. When you’re hunting in terrains that consists of thick woods and brushes, you’ll need to have two way radios that have longer range capabilities. When you’re in thick brush, obstructions can easily disrupt the signal. Weakened signals and dead spots are other enemies of walkie talkies. But the best walkie talkies for hunting have longer ranges that will not only be able to reach farther out but also be better able to clear through these kinds of obstructions.