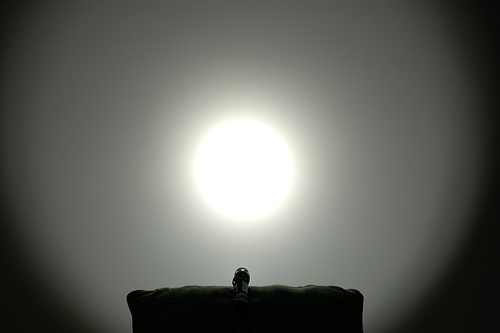 Photo by Yuankuei Cheng / CC BY

talk about Olight vs Surefire? Well, the modern marketplace for tactical lights is quite expansive, but you have to weed through a lot of junk to get to the good stuff. A few companies will constantly come up when it comes to quality lights, and two of those happen to be Surefire and Olight.

They are similar in a lot of ways but also vastly different. The main thing they have in common is that they make good lights, and they make a variety of them. They both make a combination of handheld lights and weapon lights across a wide spectrum of sizes and styles.

Olight vs Surefire – Breaking Them Down

Surefire is a company known for producing quality light designed and utilized by armed professionals. Surefire is a company you’ll commonly see on the belts and on the weapons of law enforcement, combat arms troops, and even Special Operations forces across the world. They are substantially older and a lot more well-known than Olight. Surefire has been around since 1979 and has continued to innovate and push light technology forward.

Olight is only 11 years old, but they’ve made a nice splash in the community. Olight’s been developing and selling a wide variety of lights and have made a good impression on the EDC and outdoors communities. They seem to be popular with the budget-minded and serve more on the civilian side than the police or military. Their weapon lights are excellent for home defense and concealed carry, and their handheld lights made a great impression on hunters and general outdoorsmen and women. 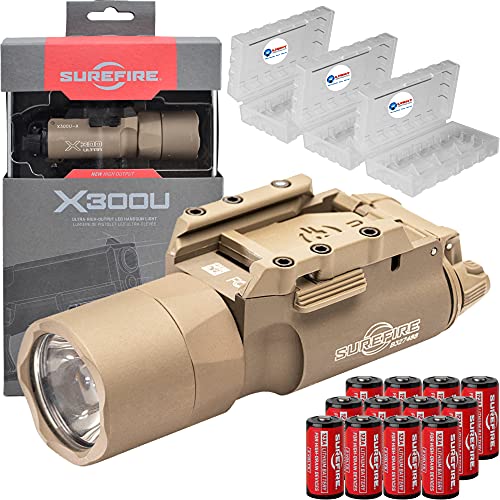 Surefire makes both handgun lights and rifle lights. Their X300 series are likely the most commonly used weapon light in the military and police world. It’s a well-deserved reputation as one well-designed, amazing piece of gear. It’s proven to be extremely durable and to withstand thousands upon thousands of rounds of recoil for handguns, rifles, and shotguns. It’s an amazing light with options that currently go up to 1,000 lumens.

For concealed carriers, Surefire even makes a compact weapon light called the XC1-B Compact Handgun Light (see full specs). This little light packs either 200 or 300 lumens worth of light, and additionally the unit can come with a red laser aiming device. This complete package is finished with ambidextrous controls and constant-on activation.

The Surefire Scout Lights (see full specs) are their premier log gun lights and are again used by military and police forces everywhere. The Scout series of lights are dynamic and powerful lights that are reliable no matter where you are or where you are going. They are well-made and will last you forever, even if you treat them brutally. The Surefire Scout lights are in use by some of the most elite fighting forces in the world. They are tough as bricks and modular in nature.

They also come in a few different sizes that are worth mentioning, and the M300 is the smaller unit that’s optimized for short carbines and the M600 is more powerful and has a longer battery at the expense of a larger overall package. There are optional IR light features for those rocking night vision. 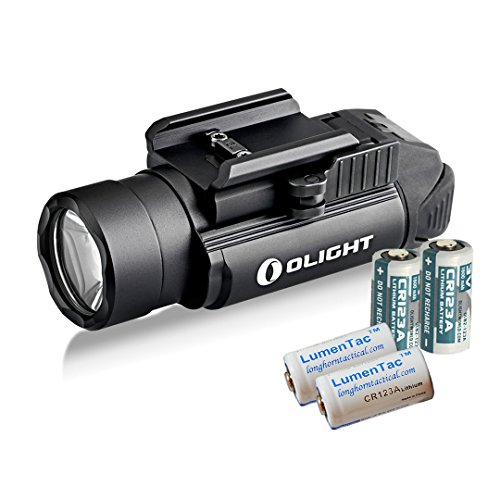 Olight is a much smaller company that’s focused more on the civilian than the Operator. They produce only two weapon lights, and both are designed for the pistol platform. The first is the full-size PL-2 Valkyrie. This is a full-sized light that packs a massive 1200 lumens of light power. This face-melting beam is really optimized for long distance viewing.

The light is still lightweight and only weighs 3.8 ounces, and that’s with the CR123 batteries it takes to power it. The PL-2 Valkyrie is an excellent option if you prefer carrying a big gun or for a home defense handgun. The blinding white light will certainly distract any potential home invader and give you excellent target identification. The use of polymer over metal construction would make me nervous for duty use.

The second weapon light is the Olight Mini Valkyrie (see full specs). This is a compact light that’s designed for concealed carry. It attaches to any railed handgun and is considerably smaller than the PL-2. It packs 400 lumens from a Cree LED and has a mini USB charger that ensures you can charge it almost anywhere. The Olight PL Mini is a great little light for a compact weapon and its small size, and light weight make it easy to conceal, and the low price makes it affordable for average Joes. The lack of a laser may bother some folks, and the Surefire XC1 is already the smaller light if you want to maximize concealability.

Both Surefire and Olight also make a wide range of handheld lights. It’s tough to compare exact models, so I’ve pulled a few that correspond to individual tasks.

For normal EDC, Surefire offers up the EDCL-2 (see full specs). This aluminum body light is basically indestructible and can be used as a flashlight, a glass breaker and even a face breaker when necessary. The EDCL-2 is a powerhouse and comes in both 1200 lumen and 500-lumen variants. It might be a bit expensive for many, but you do get one of the best EDC lights ever. It’s a rugged tool that takes a common battery. It’s also compatible with Surefire’s full line of accessories.

On the other hand, Olight has the S30R Baton (see full specs). This 1050 lumen light is rechargeable with a dedicated base pad for it. The overall design is simple, and it’s rugged. The addition of a magnetic tail cap allows you to mount it to metal objects makes it extremely handy.

It’s generally cheaper than the Surefire (but price fluctuations do happen) but unlikely to be as durable. It’s simpler but still reliable and robust and will serve your average guy or gal for years of service. I like the ability to charge the Olight in my office or car so for urban EDC you are unlikely to ever have a dead battery for long.

Olight vs Surefire – Duty Use

The Surefire Tactician High-Output (see full specs) is an excellent duty light. It uses a high output LED that throws a bright and wide beam an impressive distance. As a duty light, it’s made of aluminum and is extremely strong. It can be a glass breaker or a weapon and still working as a flashlight.

The Tactician can even become an improvised weapon light with the addition of a simple adapter, and that makes it versatile for duty use. The Tactician is a tough and rugged design that takes common CR123 batteries and shines with 800 lumens of force.

The Olight M2R Warrior (see full specs) is also a very powerful light that shines with the force of 1500 lumens. The Warrior has several modes including turbo and soft light that both affect brightness levels and battery life.

The Olight uses a rechargeable battery which a double-edged sword. It’s perfect for a car charger, but the high amount f power will kill the battery quickly and if you can’t make it back to your car what do you do? The only solution is to grab an additional 18650 rechargeable battery, and they are not the cheapest option.

Surefire’s Titan Ultra Compact (see full specs) is a penlight for the ages. This super small light packs 125 lumens at its high setting and 15 lumens on low. The Titan Ultra Compact uses a high performance LED with a simple head switch for activation. It’s lightweight, rugged and reliable. The Surefire presents a bit of an open beam, best used in close quarters, which can be expected for a pen style light. The two settings are a godsend for a lot of tasks. The dimmer setting is perfect for inside a vehicle, n office, or movie theatre without disturbing others.

The Olight Slim (see full specs) is another penlight design that takes a common AAA battery. This rugged little light pushes out 180 lumens but only has one setting. It’s brighter, but it might be too bright for super close quarters use. The Olight does use a tail switch which I prefer overall, and it’s also much cheaper which is great because my Compact Light is usually a backup that doesn’t see much use.

Olight vs Surefire – Light it Up

In the end, both companies make great lights. In my own opinion, I’d choose Surefire for duty use as a police officer, soldier, or for private security. For EDC, home defense, and outdoors task, however, I’d be completely comfortable with an Olight. Depends on how much you want to spend. If your last name is Vanderbilt, pick Surefire. If you’re a working stiff who’s a bit anxious once in a while with bills, stick to Olight. That would be my opinion.

In the end, both brands will certainly light things up for any situation you’d be caught in. Good luck!