Photo by karina bueno / CC BY

the deal with FBI cant holsters? Well, the good old FBI Cant came along when agents realizes discretion was the better part of valor. The G men wanted to conceal their guns but wanted quick access so the so called FBI cant became the choice of agents.

Holsters with the FBI cant offer civilians the same thing: a rapid and easy draw from deep concealment. Modern FBI cant holsters offer great retention, are comfortable to wear, and are made for modern guns (not that there’s anything wrong with the S&W Model 13’s Feds carried for a while).

Below are our recommendations for the 4 best FBI cant holsters on the market: 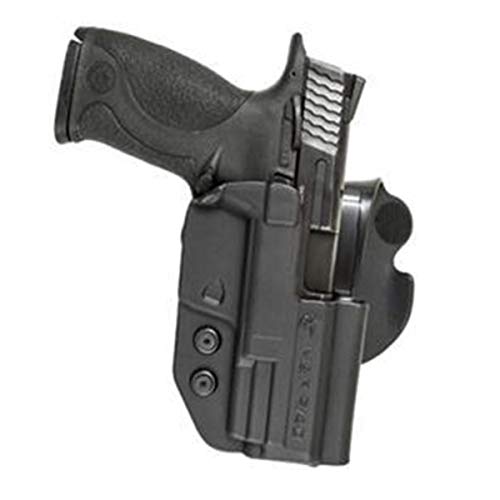 The Comp Tac Paddle holster is the most popular holster in IDPA shooting competition. It’s made for just about any semi-automatic handgun and features a forward FBI cant (the holster above is for Springfield XD’s, but they’re made for many other gun companies too). It’s a polymer holster that use passive retention to keep the gun in place. This holster is designed for competition, but isn’t unsafe for concealed carry. While the trigger remains covered you may notice a distinct cut in front of the holster. This cut doesn’t just reduce holster weight, but makes it faster to draw.

Since speed is always of the essence, every little bit counts. The Comp Tac Paddle holster paddle is different from most. It’s designed to keep the gun tight to the body. Most paddle holsters push the gun away from the body, but the Comp Tac keeps it close. This aids in concealment while offering a very comfortable carry platform. The paddle itself is well-designed and comfortable against the body. The paddle has two forward curving tabs that latch under the belt.

The Comp Tac is well proven and well thought out. It’s been used by numerous IDPA champions and offer secure carry and a fast draw. The forward FBI cant increases the concealability of large guns, and makes them comfortable to carry for day in and day out carry. 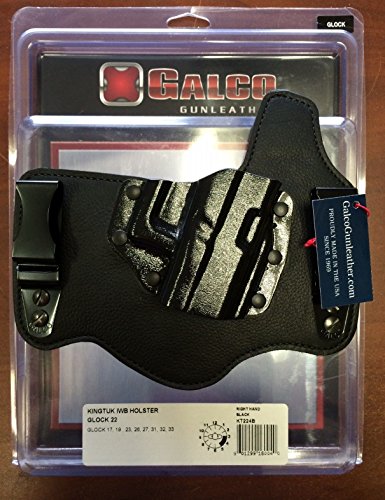 That’s not to say small guns aren’t easily carried. It’s just the IWB and FBI cant of the holster means you can easily conceal a larger gun. You get the most benefit from this holster when carrying a large gun. The Galco King Tuk is a hybrid IWB holster meaning it utilizes both natural and synthetic materials. The portion that sits against the body is remarkably soft and designed for all day comfort. It completely separates your body from your gun. The front portion of the holster is a kydex-like polymer material that protects the gun. Kydex is also molded to the gun for increased retention and a faster draw.

The King Tuk features two adjustable clips that can be moved up and down to change the rife height of the holster. The Galco King Tuk is an excellent low profile deep carry option for any gun, but the biggest benefit is to larger guns. This is one of the best FBI cant holsters for the money.

Galco King Tuk Holster Review (made on the new iPad) 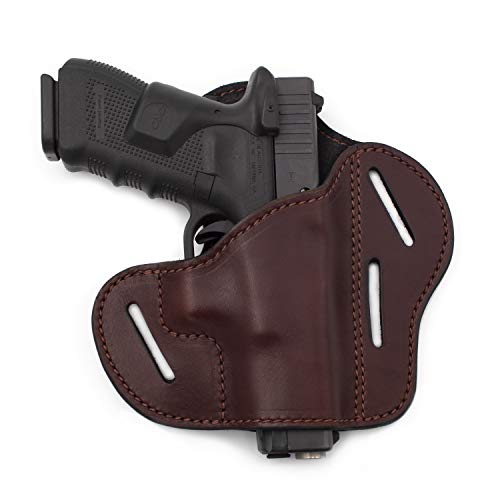 Relentless Tactical is a small leather company making a big splash. When everyone started looking at kydex, they started looking at leather and kydex. They carved a market out by making high quality, modern leather holsters. Their 3 slot OWB model isn’t just an FBI cant model but is based on one of the FBI’s original canted holsters. The word 3 slot may leave some confused. This means the holster has a rear belt slot and two forward belt slots. The users chooses one of the two slows. One of the slots has the gun straight up and down and the other gives you the FBI cant.

The difference this holster makes is the molded leather holster is made to accommodate a wide variety of guns. This includes models from Glock, Smith and Wesson, and Springfield. The tight leather construction means the holster is comfortable when worn tight against the body. This tight construction and the pre curve fit keeps everything nice and concealed. The gun has a built-in sweat guard that also protects the gun, and it keeps it from rubbing you raw.

Relentless Tactical placed a lot of effort in making this holster an excellent concealed carry option. Not only is it easy and rapid to draw from, but its lightweight, clings close to the body and remains comfortable. The ability to swap cants is a nice touch. Hands down, this is one of the best FBI cant holsters around.

Blackhawk Serpa FBI Cant Holster (or any other cant you want) 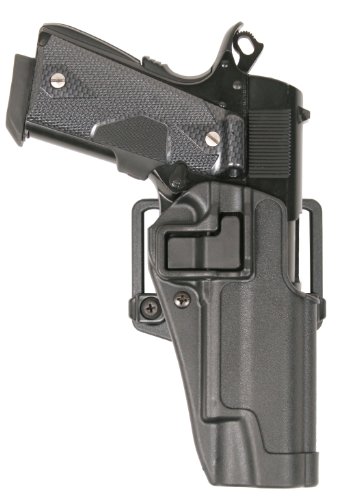 If you want a modern option for almost any weapon the Blackhawk Serpa is the way to go. These ultra modern polymer holsters feature an active retention device. The Serpa is made for just about every gun I can think of, both modern and old. They even have options for revolvers (like the aforementioned old-school G men’s S&W Model 13). The key to the Serpa series is modularity. You can adjust the cant forwards to an FBI cant easily. That’s just one part of the modular nature of the Serpa holster system.

You can utilize a belt loop attachment, a paddle, a leg rig, a MOLLE adapter and more. The Serpa holsters are designed for both duty use and concealed carry. Outside of being modular, each holster is designed and fitted for a specific handgun. This means everything gun fits and snaps in perfectly for tight and reliable retention.

The Blackhawk Serpa series of holsters are a very modern option for those looking to rock the FBI cant with a modern and modular system.

The best FBI cant holsters offer a classic carry position for those of us who prefer strong-side carry. Carrying strong side means you have to take an extra step to make concealment possible and FBI cant holster allow that to be a possibility. Good luck!