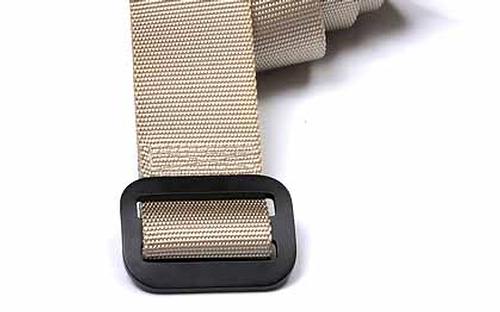 the most important EDC items is a good gun belt.  In fact, your gun belt is arguably more important than your holster.  A flimsy belt will not only be unable to hold up your gun properly, but there will be a lot of movement with the holster especially when you draw.  That’s why when you’re putting together your everyday carry items, the gun belt always needs to be the first thing that you look for.

You have a variety of different options in regards to the material of your bet, but nylon is a good option.  Not only is it very durable and sturdy, but it’s significantly cheaper than leather gun belts as well.  Yes, leather belts may look nicer, but nylon belts will show less wear and tear overtime while simultaneously saving you money up front.

In this article, we’ll discuss the 4 best nylon gun belts on the market and then give you an overview of the factors that make a good gun belt.

The BlackHawk! Instructor’s Gun Belt screams tactical just when you look at it for the first time.  But tactical can be a good thing because it usually means it’s built for rugged use, and when you’re buying from BlackHawk!, you know this to be the case.

The Instructor’s Gun Belt (see full specs) in particular is one and three quarters of an inch wide, which is more than suitable for holding up your holster, while the tensile strength rating comes in at seven thousand pounds.  And while the outside of the belt is definitely nylon, the inside of the belt is actually made out of a Kydex stiffener to help support your pistol and any additional gear that you will be holding up with the belt.

All in all, the BlackHawk! Instructor’s Gun Belt may not be the prettiest looking gun belt on the market, but it is undeniably one of the most functional.

Another high quality Mil-Spec nylon gun belt, the Elite CO Shooter is designed as a heavy duty tactical/concealed carry belt.  It’s been significantly stiffened in order to support holsters and magazine pouches, while the actual belt itself (see full specs) is one and a half inches in width.  The belt buckle meets the Mil Spec guidelines for resisting sand and water.  The Elite CO Shooter’s belt is available in both tan and black, and is made entirely here in the United States.  Bar none, it’s one of the best nylon gun belts you can buy. 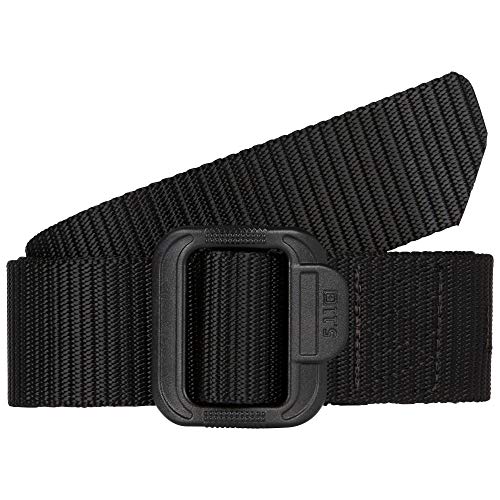 The affordable and functional 5.11 TDU Gun Belt is also highly ergonomic and is fade resistant.  It is constructed out of a strengthened and rip resistant nylon material and is furthermore reinforced with triple stitching.  The buckle is non-metallic so it won’t attract attention and avoids detection by metal detectors.

But what’s really cool about the TDU gun belt is how it can also be converted into a carry strap on a backpack, meaning that you can carry this belt as a strap through airports.  All in all, you should find that the 5.11 TDU Gun Belt as one of the most versatile components in not just your tactical wardrobe but your overall wardrobe as well. 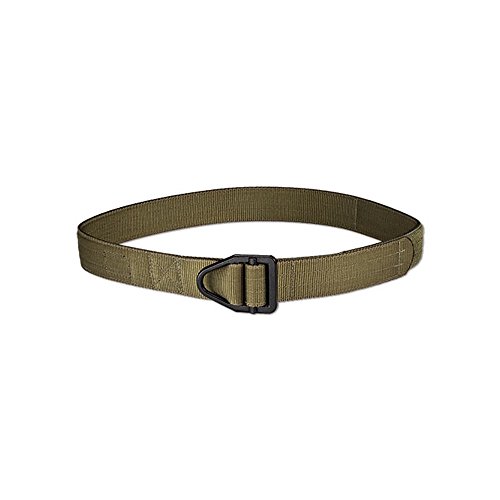 The Uncle Mike’s Tactical Two Layer Instructor’s Belt is so named because it contains a sheet of reinforced polymer in between the two layers of nylon to properly support the weight of the gun holster and all other accessories.  The nylon itself is rigid, which means that this is a heavy duty belt that is simply not going to bend (at least not easily) under a lot of weight.  Based on a rigger’s belt, the Two Layer Instructor’s Belt is an inch and a half wide and fits nicely with jeans and cargo pants alike.

Individuals who conceal carry will often spend a lot of their time (and their money) testing out a variety of different holsters for their pistol to find the one that meets the right balance between comfort, firearm retention, and ease of concealment.  This is fine, but you need to dedicate just as much time (if not more so) to finding a suitable gun belt.

The best gun belt, regardless of the material that it is constructed out of, must hold up your pistol and other gear without any difficulty whatsoever.  It needs to be both stronger and wider than an ordinary belt in order to accomplish this.  If your belt fails to hold up your holster properly or if there is too much movement when you draw your pistol, you should reject it immediately.

This is why when it comes to nylon belts, a model with a layer of durable Kydex or polymer in between the two layers of already rigid nylon is a great feature to ensure that the belt doesn’t bend under weight or pressure.

Your belt also needs to be fully comfortable for you.  You can only determine this by testing out the belt yourself, so consider wearing different nylon gun belts at your sporting goods store and then perhaps searching for a better deal online (a lot of online retailers, like Amazon, provide a great return policy too).  You don’t want to notice your gun belt while you’re wearing it; if you do, you’ll continuously be distracted by it and try to adjust it in public, which could potentially reveal your concealed weapon to the other people around you.

In short, rigidity and comfort are the two biggest factors to look for in the best nylon gun belts.  If you can find a good belt that meets both of those criteria, you’ll be in good shape.  Just remember to actually invest the time and money into finding a belt that actually does meet both of those criteria as you would invest into finding a good holster, because like we said earlier, the gun belt is arguably the most important element of your EDC.