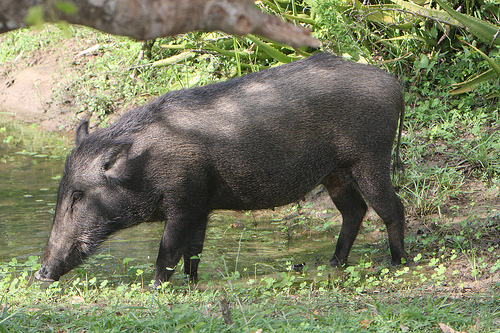 Photo by Matthew Goulding / CC BY

want to take down a wild boar, using bait or lures is by far the best way to do it. Boars are omnivores and will eat nearly anything edible they can find. The good news for you is that this means finding a suitable bait to lure one in shouldn’t be too hard.

Natural food sources of wild boars include grubs, snakes, acorns, crawfish, corn, and plant roots. However, premade hog attractants will work too, and no doubt save you a lot of time. Many of the above-mentioned ingredients are incorporated into the different baits available on the market, and below we list 4 of the best hog baits you can buy: 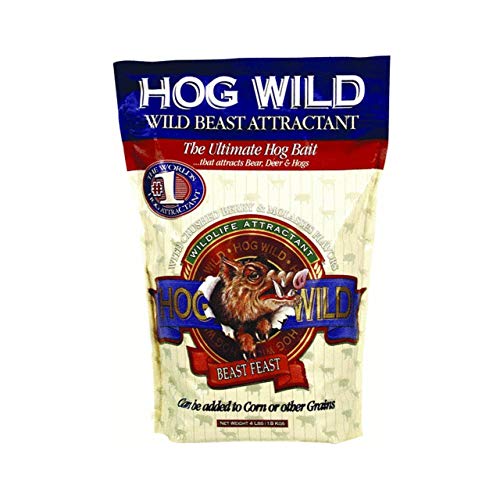 One of the bestselling hog attractants is the Hog Wild and Wild Beast attractant. This bait incorporates both berries and molasses in order to create an attractant that can lure in wild boar in addition to bears and deer.

But what’s particularly neat about this bait is how it just won’t lure in boar but how it will keep them in your area for hours. That alone is worth a lot more than what you will pay for this bait. This bait will be made even more effective when mixed in with corn and then left in a pail in an open clearing. Hide yourself in the trees and then wait for the boar to appear, and your hunting trip is over before it began. It’s a great wild hog bait period. 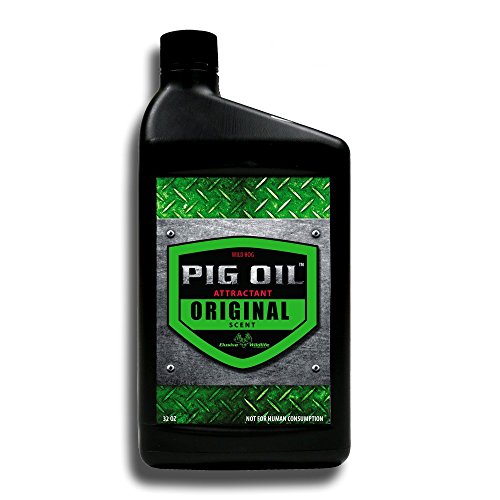 Never underestimate the sense of smell of a wild boar. In fact, some scientists and zoologists believe that a boar’s sense of smell may be among the strongest of any living animal. It has been proven that they can smell food up to seven miles away and even food that is buried twenty five feet under the ground.

The Pig Oil Wild Hog attractant puts out a dominating odor that is sure to lure in wild boars from maybe even beyond those seven miles. Simply pour the attractant over a tree or a post and then wait in a blind for the hogs to come to you. They will simply not be able to resist the smell, making this one of the best hog baits around. 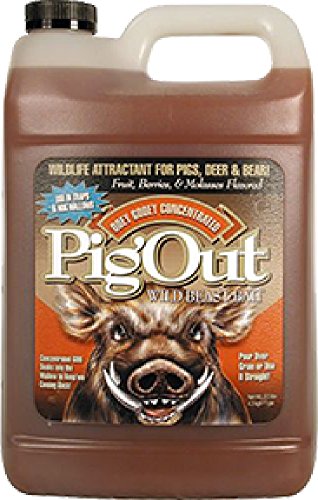 This wild hog bait contains one gallon of a mixture that smells very similar to cherry cough syrup, acorns, and corn. These are among the favorite foods for a hog so this attractant is sure to bring them in very quickly. Many boar hunters who use this attractant like to leave enough of it out on the ground for the boars to wallow around in and draw more in. This way, you can create an area where boars will frequent during the day, giving you options in regards to which one you want to shoot or trap.

How to Set up the Best Hog Baits

Since wild boars have an incredibly strong sense of smell, they will naturally gravitate to whatever kind of food they enjoy, especially the ingredients that we listed in our introduction. If you plan on setting a trap for a boar rather than shooting them, you will want to avoid putting too much bait surrounding the trigger mechanism. Instead, place more bait in the inside of the trap but on the opposite side of the trigger.

The idea for this is that multiple boars rather than just one will be drawn into the trap, and eventually when enough are inside the trap one of them will press against the trigger mechanism and cause the door to be closed. Using this method, it’s possible to trap up to ten pigs at once.

Another little known trick in regards to baiting hogs is that boars will commonly follow raccoons. The reason why is because boars knows that raccoons are scavengers who are very adept at finding food. In other words, if you live in an area with a high concentration of raccoons, the wild hogs won’t be far behind.

This also means that the raccoons could discover your bait first. Raccoons will be naturally drawn to the smell of the urine of another raccoon, so a trick you can use to draw in raccoons is to spray raccoon urine around or next to your hog bait. This way, once the raccoons have discovered your bait pile, the wild hogs will follow and begin wolfing down the food that you have set for them.

In regards to actually setting wild hog baits, you should avoid automatic feeders at all costs. The boars will simply push the tripods down to spill out all of the bait and ruin your set up (which also wastes your money). Even if you believe that you can stake down the tripod far into the ground, never underestimate the strength or determination of a boar just as you also shouldn’t underestimate their sense of smell. If they want to knock down your tripod to access the food inside, they will knock it down.

Instead, use barrels or a dig a hole with a post hole digger. Either way, you will want to keep the barrel or hole as deep and as narrow as you can. You want the hogs to have to work their way down until they get every last crumb. If dirt is spilled into the hole or digger and covers up with the food, the hog will have to spend some of its time moving the dirt away to access the food underneath, driving them crazy and keeping them around longer.

If you’re fortunate enough to draw in multiple animals at once with the best hog bait, they’ll have to compete with one another in order to access the food inside the barrel or hole, which further keeps them around for a longer period of time. This way, you’ll be able to wait for the largest trophy boar to appear before making a shot and have a hunt that you can brag about afterwards. Good luck!