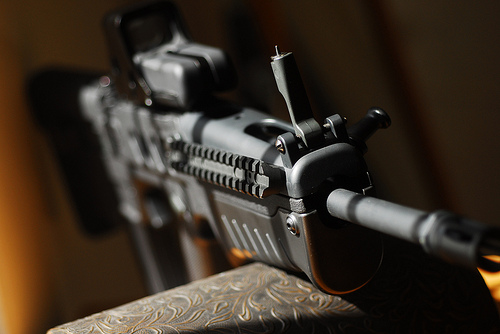 Photo by Timothy Tsui / CC BY

is one of the most popular bullpup rifles in the United States. Due to its odd configuration, some folks aren’t so sure what’s the best way to scope it. The bullpup Tavor is perfect for both standard rifle engagements. The Tavor is also a very short rifle so close quarters combat is a strong point of this rifle. Yet it also has a 16 plus inch barrel that allows you to reach out to 500 yards. Bottom line: it’s a versatile rifle that can do a lot of different work.

With these considerations in mind, here are 4 of the best optics for Tavor around and cover the variety of uses it has. 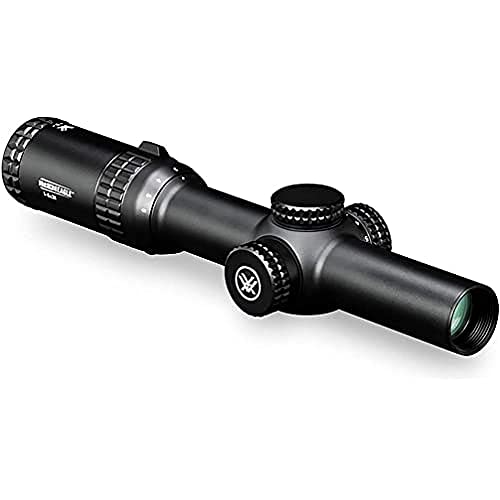 Is your Tavor running in competition, hunting, or is it being used as a designated marksman’s rifle? If so the Vortex Strike Eagle is an excellent optic for you. This optic is also one of the more versatile options on the list due to its variable magnification range. The Strike Eagle transitions from 1 to 6 power magnification. At 1x, it’s an effective close range optic and, when combined with its illuminated reticle, can act almost like a red dot. Of course, it does have a shorter eye relief that the vast majority of normal red dots.

The Vortex Optics Strike Eagle’s high magnification levels make it a lot easier to reach out and hit smaller, farther targets. The Strike Eagle uses a small 24mm objective lens, and overall the scope is light and small. This fits the Tavor pretty well, the reason being is the Tavor is nice and light and so are the optics for it. The reticle itself is pretty simple but very handy.

The reticle is a bullet drop compensator that allows the shooter to easily engage targets out to 600 yards. The hash marks are dialed into different ranges. For example, the third hash mark is for making 500-yard shots. This kind of reticle is dialed in specifically to the .223/5.56 round the Tavor is chambered in. Far and away, it’s one of the best optics for Tavor rifles around. 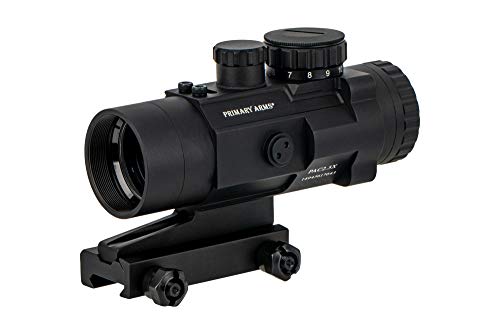 The Primary Arms 2.5 power compact scope is an excellent compromise in price, but not in performance. Primary Arms is well known for producing high quality, well made, but affordable optics. The Primary Optics 2.5 power compact scope is an excellent mid-range scope for target engagement out to three hundred yards and beyond. This is a fixed power scope, which is beneficial for a few reasons. First and foremost, it’s cheaper to produce, and that is passed on as quality to the consumer. Second, it’s more durable due to simplicity. It’s also a smaller, lighter weight optic.

It fits well on a Tavor and allows the user to have a versatile weapon’s platform. The Primary Arms Compact scope (see full specs) was designed for the AR 15, but since the Tavor shares so many AR 15 characteristics it works perfectly with the Tavor. The scope is outfitted with an interesting reticle. The reticle is called the CQB-M ACSS. This is a bullet drop compensating reticle that allows shooters to place rounds out to 500 yards. This dot even has settings for 9mm and .300 Blackout, which is great because the Tavor can be converted to 9mm and .300 Blackout.

This 2.5 power optic is affordable, handy, and easy to use, and as versatile as the Tavor. It also has the benefits of mounting to any ACOG mount and comes with a mount. 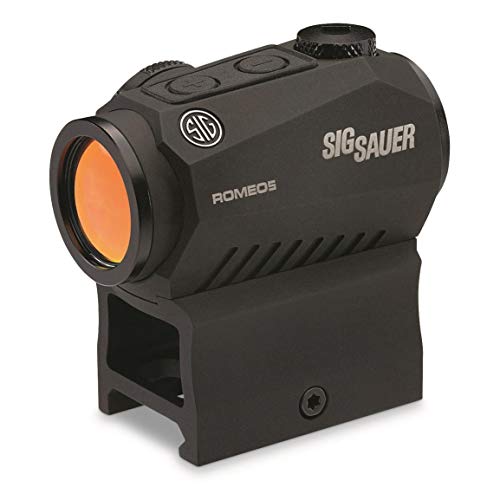 Sig is pretty well known for making some of the best combat handguns on the planet. These guns are designed and used by law enforcement and military units worldwide. Their red dot optics and variable optics lines are becoming more and more popular. They have been adopted by more and more police forces and gained popularity on the civilian market. The Sig Sauer Romeo 5 is one of their more popular optics.

If you are looking to keep your Tavor nice and light for close quarters combat the Sig Romeo 5 is the optic for you. The Tavor is perfect for close quarters and a red dot makes it even faster and easier to use. The Romeo 5 has a 2 MOA red dot that is eye catching but small and precise. The Romeo 5 has 10 illumination settings with 2 dedicated for night vision devices.

What’s really unique about the Sig Sauer Romero 5 is the MOTAC operation. MOTAC, or motion activated illumination, is a way to keep the optic and rifle ready to go but to also preserve the battery. When the rifle and optic are left on it will shut down after an extended period of non-movement. Upon movement, it jumps right back into action. The battery will last over 40,000 hours, which makes it comparable to Aimpoint optics. This is one of the best optics for Tavor in my book. 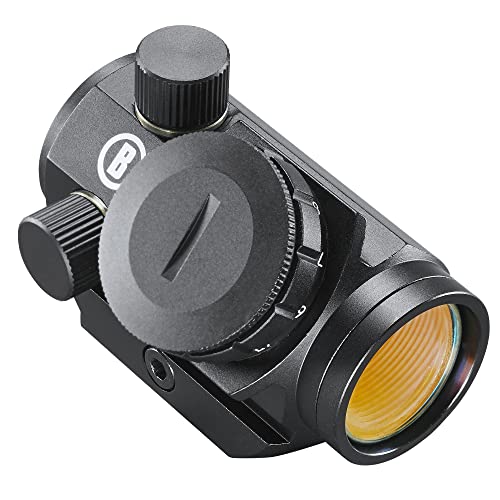 The Bushnell TRS 25 is a simple, and very affordable red dot optic. It’s also a miniature red dot that is lightweight and easy to use. It lacks a few bells and whistles, true, but is an overall high-quality optic. The TRS 25 is priced well and is a solid budget red dot. It is a tough optic for the money and is water, shock, and fog proof. The TRS 25 has amber coated lenses to reduce glare but provide a clear and bright picture.

The TRS 25 has a 3 MOA red dot as its reticle and runs off a single CR 2032 battery. Once mounted to the Tavor, you have a small, unobtrusive optic that weighs only 3.7 ounces and is only 2.4 inches long. The dot has a total of 11 different brightness setting.

The TRS 25 is an excellent choice for a shooter on a budget, or for a shooter who wants to experiment with red dots before spending a ton of money on one. It’s likely the best optic for Tavors if you’re on a budget.

The odd bullpup design may change the way a rifle handles but doesn’t change what it takes to effectively scope one. The Tavor is like any other rifle in terms of how it benefits from a solid optic. With the best scope for Tavor in your hands, your rifle will be more precise, more accurate, and easier to use. Good luck!