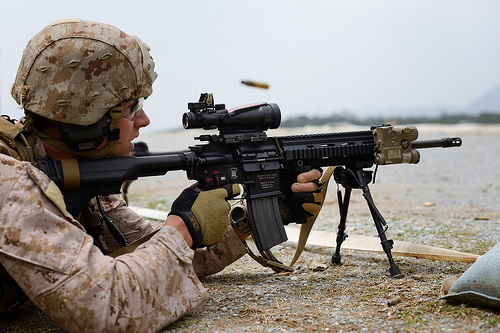 Photo by Mark Stroud / CC BY

is an excellent close range weapon, and a reflex sight makes it even more capable. If you are looking at a reflex sight, you need to understand a good reflex sight will allow shooters to rapidly transition from target to target, maintain a zero after thousands of rounds, and should be bright enough to use regardless of external light factors.

While not a priority of all shooters, night vision compatibility may be a major concern, and you need to know which sights work with what. The best reflex sights for AR15 should also cowitness with standard iron sights in case your optic fails. Good reflex sights are out there, folks, at every price range, we’ve gathered 4 at a variety of price ranges for your consideration.

The Trijicon Ruggedized Miniature reflex, or RMR sight, is a small but effective reflex sight that is perfect for the AR 15. A Trijicon RMR is designed to be used with both eyes opened, which makes the small size of the optic a nonissue. The amber dot is the only thing you see when using the weapon with both eyes opened; the RMR itself disappears. With this in mind, the Trijicon RMR is perfect for close range, rapid-fire work with an AR 15.

The RMR (see full specs) is designed to be small and light, which keeps your weapon small and light. The Ruggedized Miniature reflex sight is extremely durable and capable of withstanding an extreme amount of punishment. Dot size varies between models, but the 3.25 MOA is a perfect size for a rifle. The dot is large enough to easily catch the eye when the rifle is brought to bear in a close range combat situation. The dot is also small enough for shooters to make shots out to 100 yards and still see their target.

The Trijicon RMR has easy to operate push buttons to turn the optic on and off, as well as adjust the brightness levels. This can be done with one hand, without having to release the rifle. The RMR features brightness settings for both day and night situations with two setting being night vision compatible, and one being super bright. The Trijicon RMR is an outstanding optic, that comes at a premium price, but it’s worth every dime.  If you got the dough, it’s likely the best reflex sight for AR15 period. 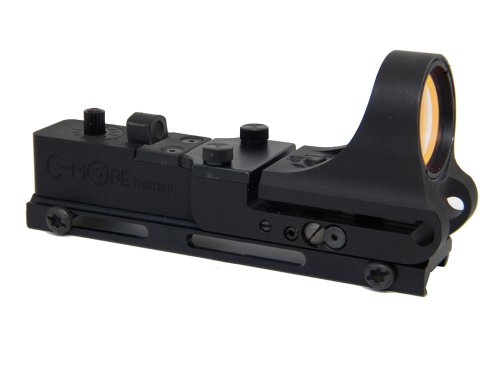 The C-more Systems Railway optic is a perfect option for those wielding a flat top upper receiver on their AR 15. The Railway optic is small and thin, which keeps the overall profile of the weapon low and small. A low profile weapon is much easier to use in close range, urban situations. The Railway is a red dot reflex sight that has a variety of different MOA dot sizes, which ranges from two to sixteen MOA by increments of two.

The Railway (see full specs) even comes in a variety of colors, which are often preferred by competitors to make their weapons a bit more eye-catching and amusing. The C-More is an interesting sight for those looking for something that’s a little less tactical and a little more fun. The C-More’s heads-up display provides a rounded, rapid to use screen with a red dot reticle. This reticle makes it surprisingly simple to get on target, and to transition from target to target with ease.

The Railway has a completely aluminum body that is capable of mounting to both Weaver and Picatinny mounts. The C-More systems optic has infinite adjustments for windage and elevation, which allows shooters to mount the optic nearly anywhere and adjust for it. C-More Systems is a favorite on the competition market and has developed a solid reputation that competitive shooters trust their career to.  And this optic is one of the best AR 15 reflex sights on the market.

The Burris Fastfire 3 has an automatic brightness setting that allows the optic to automatically compensate as the optic transitions from bright to dim light environments. It also has manual settings for those who prefer to have control over their optic at the push of a button. The optic is very easy to use, and can be mounted and zeroed in about ten minutes. The Fastfire can attach to both a flat top upper receiver or can be used with a carrying handle adapter.

The Burris Fastfire 3 has tool-less windage and elevation adjustments that can be very easily done in the field. It also allows the user to swap the battery out through the top of the optic (most other miniature reflex sights require you to remove the sight to change the battery). The benefits from this means you don’t have to zero the optic every time you change the battery.

The Fastfire isn’t the cheapest optic on the market, but it’s usually much less than the Trijicon (price fluctuations do happen, though). And while the optic lacks a few key features that the Trijicon has, it’s more than sufficient for most users.  Which is why we’ve included it on the list of the best reflex sights for AR15 rifles. 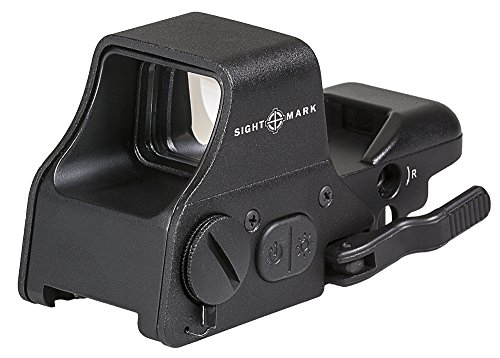 The Sightmark brand has made quite a name for themselves for producing affordable but reliable optics. The Sightmark Ultra Shot Pro Spec is the top of the line Sightmark optic but is barely priced above its standard models. The Ultra Shot is a square shaped reflex sight in the same vein as the famed Eotech but at about a fifth of the price. The Ultra Shot has a quick detach lever that make mounting the optic a breeze.

On the AR 15, an optic like this is perfect for close range combat and target engagement up to 100 yards unassisted. Fortunately, the Ultra Shot is compatible with a Sightmark 3x magnifier (see it here). The Sightmark itself has an aluminum body that protects the optics from the recoil of powerful weapons.

The Sightmark comes with four different reticle patterns that allow shooters the ability to customize the optic for their own needs. It’s also night vision compatible and can cowitness with standard AR 15 front sights. The Sightmark Ultra Shot is an excellent, budget priced, full-sized optic for the AR 15—likely the best AR 15 reflex sight for the money.

On Sight, On Target

The best reflex sights for AR 15 rifles can be used for a wide variety of roles, ranging from competition to self-defense and some are just for fun. Whatever your goal is, there is a reflex sight out there for you.  Reflex optics offer a lot of advantages over iron sights, from transitions, to simply getting on target. Having one is always an advantage.