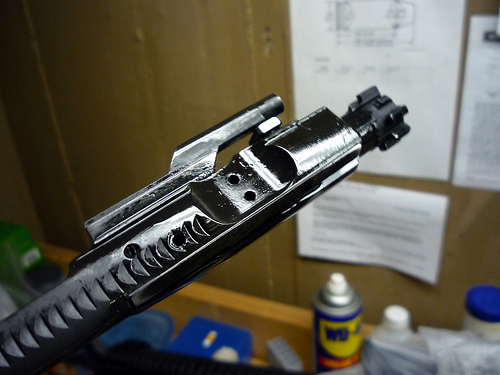 is often considered a professional’s weapon, one that can deliver outstanding performance, as long as it’s treated right, more akin to scalpel than a hammer. Like all firearms, the AR 15 needs lubrication to run effectively, especially for heavy use shooters, and those who have limited assets and time to clean their weapons.

AR15 lubes should keep the internal parts of the firearm from causing internal friction caused by both metal on metal grinding, Other issues include foreign material like sand, dust, and internal carbon build up from hardening and preventing the weapon from functioning correctly. Lubricants should keep the weapon going regardless of what happens. Some lubes can double as a cleaning solvent and a protecting compound, this is a major advantage for heavy shooters. The best lubes for AR 15 give users the ability to keep their weapons running in a fight.

Frog Lube is one of the newer forms of lubricants that is completely biodegradable and nontoxic. The ingredients are actually considered food grade and completely safe to ingest. For soldiers and Marines in the dirt, this is an excellent feature. Often these men and women on patrols have no access to cleaning their hands after handling their weapons. Frog lube’s safety features can be a major consideration for shooters with kids. These people do not want to introduce another toxic cleaner in their home.

Frog Lube’s nontoxic cleaner (see full specs) dissolves carbon on contact and reduces its mass the way it can affect the weapon. Frog Lube can suspend fouling particles like copper, sand, dirt, lead, and prevents it from gathering and building up inside the weapon. This is important for both efficient shooting, and easy cleaning when the range is cold.

The genius idea behind Frog Lube is its firm consistency when cold.  This prevents the lube from attracting sand and dust floating around. As the weapon begins the fire the lube loosens and becomes a slicker liquid to keep the weapon running as it gets hotter and hotter. After the gun shooting, the lube will begin to harden again, making it easy to wipe out with nothing more than a rag. Frog Lube is a fascinating and undoubtedly one of the best lubes for AR 15 rifles period.

M-Pro 7 is an advanced, classic lubricant that is capable of acting as a lube, a cleaner, and protective compound all in one. M-Pro 7 is as close to scent free as you can get from one of these lubricants, which is an excellent feature to have when cleaning indoors. M-Pro7 is a very powerful cleaner that reaches into the micropores of the steel. Carbon and fouling materials like lead, copper, and steel often dig into these same micropores and become lodged into it.  M-Pro 7 is capable of rooting out these pollutants and getting a solid, deep cleaning into your rifle.

M-Pro 7 can be used as a protectant and preventive measure as well. When using the lubricant you’ll actually make it easier to clean your firearm after shooting. The carbon will not stick to the internal portions of the AR 15 receiver, bolt, or bolt assembly. M-Pro 7 makes short work of carbon buildup and protects the weapon at the same time. 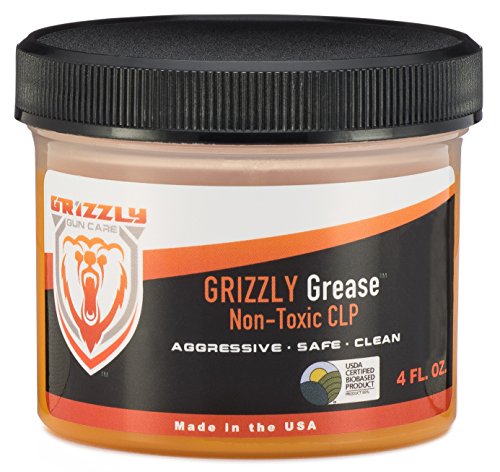 Grizzly Grease is similar to Frog Lube by being thick upon application. Unlike any other lube, including Frog Lube, Grizzly Grease is barely a liquid.  At first, the grease moniker is well earned.  Grizzly Grease is made from nontoxic materials that are certified by the USDA as a biodegradable substance. It is completely noncorrosive, and safe for contact with polymer tipped ammunition that is commonly used by hunters who use the AR 15.

Grizzly Grease meets the standards of the United States Military and can be used in any environment. While grease tends to thicken when it’s cold, Grizzly Grease can still be used in temperatures as low as negative fifty degrees. On the flip side, Grizzly Grease can function in extremely high levels of heat, and humidity, from deserts to jungles Grizzly Grease just works. Bar none, this is one of the best lubes for AR 15 on the market.

Hoppe’s No 9 is one of the classic lubricants for AR 15’s.  It is is such a classic gun cleaner that the smell is often considered enjoyable and is available as an air freshener. Hoppes has been around so long for a reason:  it works.

Hoppes No 9 will not only lubricate your firearm but will protect it from rust and corrosion. It allows water to roll off the weapon instead of being absorbed and turned to rust. It acts as a barrier against the elements and it works brilliantly. As a lubrication, it protects and reduces friction from metal on metal contact. Hoppes is also extremely affordable to this day. An oldie but goldie, Hoppe’s is and remains one of the best lubes for AR 15 rifles—or, for that matter, plenty of other guns too!

Firearms cannot efficiently function without lubrication for a long period of time. Lubrication allows the weapon to just keep ticking, regardless of the environment. The AR 15 is a reliable weapon, but like all professional weapons does require some user maintenance, and a good lubrication is one step to keeping your rifle running.  And we hope you’ve found the right lube for your beloved gun here.  Good luck!