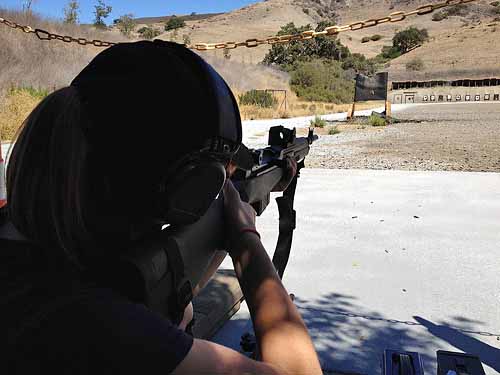 rifle is one of the premier full-powered battle rifles in the United States. The M1A rifle is a powerful, extremely accurate semi automatic rifle that can only reach its true potential with an optic because while iron sights are nice optics are way better.

When selecting an optic, however, make sure you know what you’re using your M1A for. The rifle, after all, can be a long range rifle, a designated marksman rifle, or even a close range hammer. Different methods will require different optics, and Trijicon offers an option for any M1A use you’d want. Trijicon optics are extremely well-made, incredibly durable, and trusted by military forces world wide.

They make an optic for any role, for any range, and any combat rifle. Below we go through Trijicons for every M1A there is, from M1A Acogs to Accupoints to MROs to Accupowers. They’re all here so let’s begin! 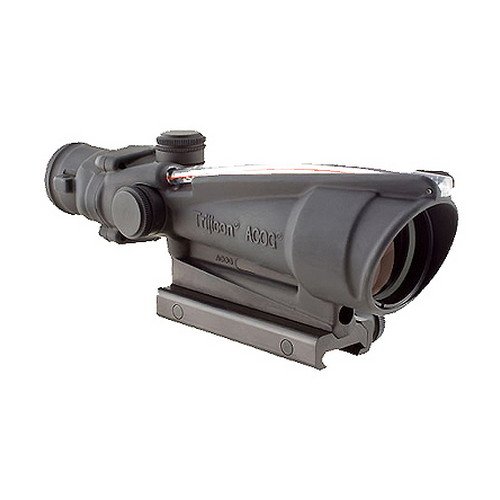 If you are looking to make your M1A into a compromise between short and long range power, the Acog is for you. I am a massive fan of the Trijicon Acog. It’s a fixed power optic that is extremely simple to use and is rock solid. I’ve taken the Acog overseas twice and it has never failed me.

The Trijicon Acog 3.5 x 35 (see full specs) with the .308 ballistic reticle is the perfect all around optic for the M1A. The .308 ballistic reticle reaches out to a thousand yards on the reticle. A thousand yard shot is difficult to make with rifle, any scope or caliber, but the option is here if you have that level of skill. I expect most people will find it easy to reach out and strike man sized targets at 600 yards.

The lower powered fixed 3.5 magnification makes it possible to engage distant targets, as well as close range targets when using the Bindon aiming concept and using both eyes to shoot. The Acog has an illuminated reticle that requires zero batteries. The M1A Acog is powered by absorbing light through its fiber optic and tritium insert that runs along the top of the scope.

The Acog 3.5 is an all around excellent optic. It’s one of the toughest optics in the world, with Acogs being shot in combat and still working. That is a true testament to their quality. They may not be entirely bullet proof, but they are shock, water, fog, and, most importantly, Marine proof! 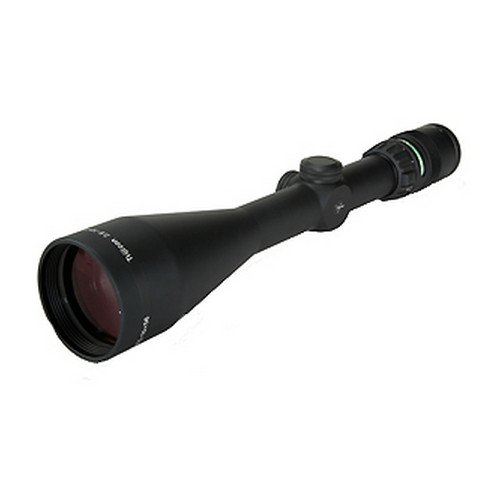 The Trijicon Accupoint is a powerful option for the M1A rifle. The M1A is certainly a capable sniper rifle, as its military variant known as the M21 is the preferred sniper rifle in urban environments.

The Accupoint is a very versatile scope that allows you to use your weapon at a wide variety of ranges. The Accupoint comes in 2.5 to 10 power, which for the tactical sniper is perfect. At 2.5 the scope can be used inside a hundred yards with ease, and the ten power setting makes it possible to reach out beyond 600 yards with precision. The 7.62mm round the M1A fires is completely capable of reaching out there and touching (or, more appropriately, splattering) targets.

The Accupoint (see full specs) is well-built and extremely durable. It’s water, shock, and fog proof, and is designed to go to war and come back and go again. You get battery-free illumination by the fiber optic technology that adjusts the brightness level to meet the outside light level. The optic has zero forward emission, meaning the front lens is shaded to prevent any glare from being emitted, which keeps your position concealed.

The scope is made from tough aircraft grade aluminum, and is weatherized to prevent water and dust from entering the scope. The lenses are fully multicoated and provide you with a crystal clear sight picture. You can easily hit targets at extreme distances, and easily pick your target out throughout the lowest light portions of the day. This scope is ready to rock and roll on your M1A.

The Trijicon RS 24 Accupower is the perfect scope for the designated marksman. The Trijicon RS24 provides you a variable magnification that ranges from 1 to 4 power. This allows the DM rifle to be used when clearing buildings, like say on the way to a roof top. Once on the rooftop, the shooter instantly increases the magnification to 4 power and begin engaging distant targets. The Trijicon RS 24 has a 24 mm objective lens that keeps the scope nice and light while also providing plenty of light gathering ability.

The Trijicon RS 24 is perfectly capable of allowing shooters to engage man-sized targets at 500 yards and closer. The Trijicon Accupower uses one CR2032 battery to provide the optic with an illuminated reticle. The RS24 has eleven different settings for brightness, and allows you to engage throughout the day and night without issue.

The Trijicon MRO is one of Trijicon’s newest optics. This medium sized optic is a close-range red dot optic designed for your close quarters hammer. The M1A Socom is the perfect rifle for this optic. This compact M1A and the MRO are an excellent pair. The MRO provides a wide 25mm objective lens and gives you a very wide field of view.

The Trijicon MRO provides a very bright red dot that makes close-range encounters rapid, and accurate. The MRO is considered a miniature optic, but it is larger than the H-1 by Aimpoint. The simple red dot reticle makes it dummy proof to use when your adrenaline is jacked and you need to move fast and shoot faster.

Trijicon makes some amazing products, they have been proven by militaries around the world. Tossing one on a M1A makes the perfect pair. The M1A is an extremely well built rifle, and is capable of filling a variety of different roles. One of the most important decisions you can make is what optic you want to equip on your rifle, and if it’s a Trijicon you’ve made the right choice, whether it’s an M1A Acog or M1A Accupoint or whatever. Good luck!