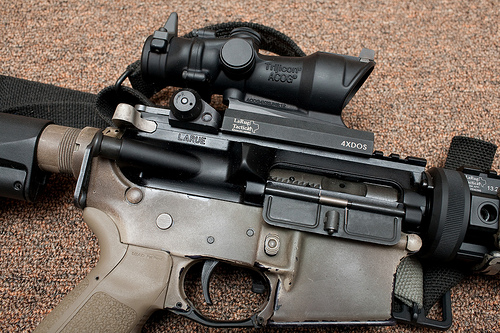 an awesome rifle sight. Used by advanced militaries and the comfortably wealthy the world over, there can be no better illuminated rifle scope for your AR 15 or similar rifle. Sadly, not all of us have tons of dough to drop on an optic. But, on the flip side, few of us are high-speed, low-drag enough to need an ACOG (though, if you want one, here are ones we recommend). Because need and want are two different things, you may be tempted to look for something that has similar function and even appearance to an ACOG, without dropping the big bucks for an optic built for war.

Because the ACOG is at the very simplest nothing more than a compact illuminated rifle scope, it is possible to have the look and basic function of one without dropping the coin for the real deal. While clones and knockoffs are generally distasteful, there is always a demand for a cheaper competitor to a high-end item. To that end, we dug around and found a few optics that give you the look and function of an ACOG without the expense. Nothing beats the real deal, but if you want to look cool, and still have a functional optic, these 4 are the best ACOG clones for you. 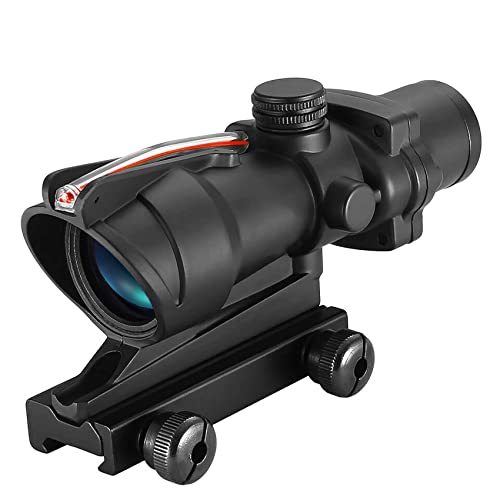 I actually like this one a bit more. Another visual look alike, this gives you a crisp LED fiber optic illuminated reticle. It’s still a non-magnified red dot, but a bit more advanced than most inexpensive red dots. Ideal again for people looking for an ACOG look and feel in a basic red dot, and perfect for any of the myriad of .22 caliber clones of modern assault rifles. You get ACOG good looks, with fiber optic efficiency, combined with the usefulness of a holographic rifle sight. What’s not to love? This is one of the best ACOG clones.
Terminus Optics TOC1 4x32 scope true fiber optic scope 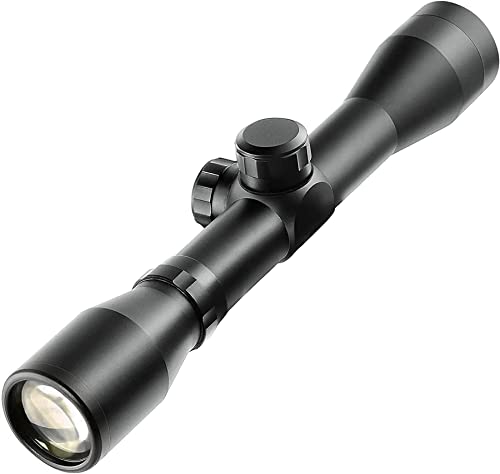 This one is pretty slick. Zeroed at the factory for common 5.56/.223 ammo, this ACOG clone is water, fog and shockproof, and designed for use with an AR 15 or similar rifle in mind. Comfortably price, this ACOG clone will give you those sexy, sexy ACOG looks, and a really nice red dot sight to boot. Affordable, durable, and built with modern sporting rifles in mind, BDTactical (see full specs) offers one of the best ACOG clones out there right now.
Fake acog? Is it worth it on a real rifle?

While not a true visual clone of the ACOG, the Barska Electro Sight (see full specs) comfortably falls in the realm of ACOG clones. It is a compact, highly functional and well built red dot sight. It features a built in Picatinny rail mounting base, adjustable brightness settings, and heavy duty construction. Built to be parallax free at 100 years, plus windage and elevation adjustable. It’s hard to find a better red dot or ACOG clone. 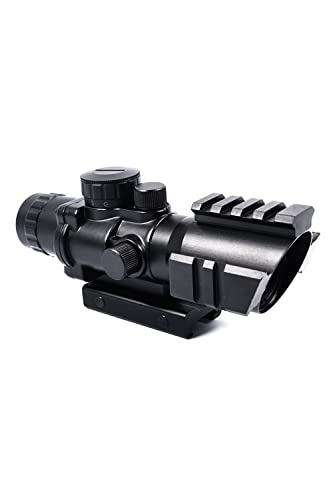 The Ozark Armament 4x Optic is a simple ACOG clone that does a lot for a low price. It’s a fixed four power optic that mimics a lot of what the ACOG does at a substantially lower price point. The reticle is a BDC style reticle that allows you to drop rounds into your target at a variety of ranges. The optic does use a battery, and the illuminated reticle has three different color options. You have your traditional red, your eye-catching green, and your softer blue as reticle colors. The optic is equipped with three different Picatinny rails for attaching accessories directly to the optic. This is perfect for mounting a miniature red dot optic for close quarters shooting. This affordable optic is quite clear, and fog, water and shockproof.

This was a tough one. One the one hand, you have the ultimate in holographic rifle sights. Battle-tested and warrior-proven, ACOG sights are the standard by which all other similar optics are judged. You can’t get any better, because there are no better. On the other hand, there is a huge demand for affordable clones, which means there are a number of visually and functionally similar copies running about of various degrees of quality. Trying to find the best ACOG clone meant wading through a bunch of airsoft crap to find a few solid gems you wouldn’t be ashamed to mount on your rifle, or simply waste your time and money, but we did it.

One of the quickest ways to save money over a real ACOG is to do away with the radioactive tritium used to illuminate an ACOG. By switching to battery powered illumination, the cost plummets. The next cost savings is in actual construction. Sure, we all want a sight that can survive a direct hit from an atomic bomb, but how many reading this are actually about to go off into a war zone? The answer is very few, and then the government will give you an ACOG to use. Overbuilt is overpriced, and so by building to civilian sporting standards, we get another huge cost savings, while still retaining a functional sight. The last way to bring the cost of an ACOG clone down is through less advanced glass in the optics. Think of the difference between a Ford and a Ferrari. They’ll both get you from point A to point B, but the Ford won’t be as cutting edge.

An ACOG clone is ideal for mocking up .22 caliber copies of famous assault rifles and allows you to enjoy the look and feel of a more expensive full power rifle, including optics at a much lower price. Sometimes of course, you just want an ACOG clone on your 5.56 AR 15, which is understandable. Red dots and holographic sights are very popular for that platform, and if you can’t afford or don’t want to drop the coin on an ACOG, there is nothing wrong with getting a nice clone in order to maintain a classy look.

No matter how you slice it, an ACOG clone is a useful optic that has a valid place in shooting sports and the marketplace. As long as you approach them with the understanding that underneath the lookalike exterior there is a basic red dot setup under the hood, you won’t be disappointed. The best ACOG clones will also provide bonus points for that sexy looking rifle.  Although, let’s be honest for a second:  if you really want an ACOG, you should just save up and get the real deal.