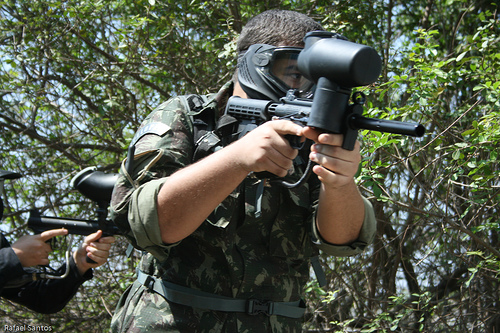 Photo by Rafael Santos / CC BY

decided that you want to play paintball, or specifically woodsball. Maybe a friend invited you to a game once and you had a lot of fun and want to get into it, or maybe you’ve seen a lot of YouTube videos of the sport and think it looks like something you’d be interested in. Either way, it’s important that you have a good gun if you really want to get into the game.

In that regard, the next question you probably have is a simple one: “What is the best woodsball gun on the market?” Well, it’s a very challenging task to choose the number one best paintball gun out of hundreds of different models out on the market. Fortunately, it’s significantly less challenging to provide you with 4 woodsball guns that represent the right balance between quality and popularity. 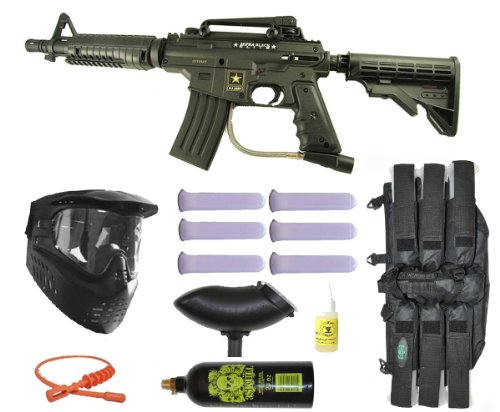 If you want a woodsball gun that best simulates the real life military M4, then this is the paintball gun for you. Produced by Tippmann (a company known for producing high quality paintball guns and equipment), the U.S Army Alpha Elite features a foot long ported barrel, a magazine that hold holds tools, and the option to mount scopes and other optics. All in all, this is a great package to have regardless of whether you’re an occasional or a diehard woodsball player, and the look and feel of a real M4 is hard to beat. This is likely the best woodsball paintball gun if you want your game to be as realistic as possible.

One of the more prolific woodsball guns would be the Tippman 98 Custom. The Tippman 98 is the gold standard for an easy to use, reliable, no frills paintball gun. The gun makes use of a split receiver that will give you quick and easy access to the internals of it, regardless of whether you are on the field or off of it, an ACT (anti-chop technology) that minimizes the breakage of pain, and the inline bolt system that’s become a trademark of Tippman and delivers fast and accurate shots. This should be on anyone’s list of the best woodsball gun. 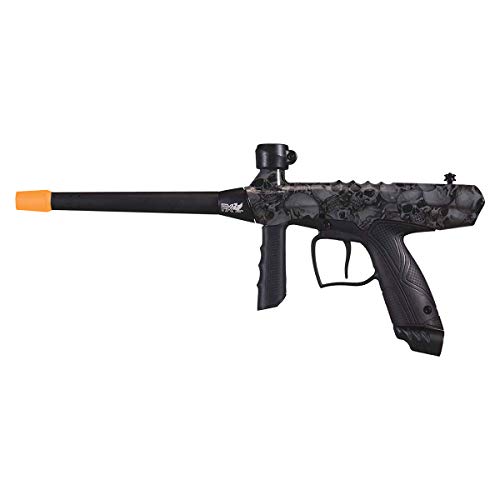 Another high quality paintball gun offered by Tippman is the Gryphon Paintball Gun. This paintball marker is designed for high performance thanks to its ergonomic design, ported barrel, internal gas line that keeps the gun cleaner than most paintball markers internally, and a blade trigger that offers one of the smoothest trigger pulls of any paintball gun on the market. It may not be as prolific as the Tippman 98 or as realistic looking as the Alpha Black Elite, but when high performance is what you desire the most, the Gryphon is the best woodsball gun for you. 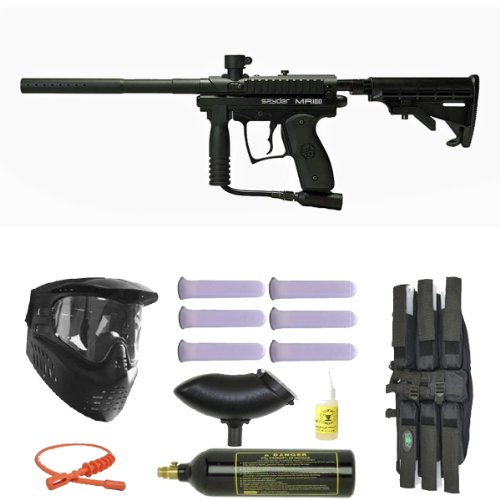 The Spyder MR100 is one of the paintball guns that set the standard for several other paintball guns that came after it and will again for the paintball guns that come in the future. The MR100 features an Eko Valve system that is very air efficient and will fire over one thousand five hundred shots from your typical twenty ounce tank of Co2. But the real stand out of the MR100, and the reason why it has set so high of a standard, is because of the abuse that it can be put through. The polymer of the MR100 is designed to sustain high impacts, as are the aluminum side rails that will keep all of your add-ons and accessories fully secured in tough and dirty woodsball environments.

Accessories/Qualities You Will Need in Your Woodsball Gun

Any one of these woodsball guns will work very well for you, but each of the products we have told you about is only the base models. There are a lot of accessories that you can add to your woodsball gun to enhance it and make you a more formidable player on the battlefield. For example, the Tippmann Custom 98 is among the most customizable paintball guns out on the market. But that’s not to say that other woodsball guns aren’t customizable.

The most important accessory for any woodsball gun is the barrel. A major difference between amateur and veteran woodsball players lies in the barrels themselves; veteran players often have higher quality barrels and one or two extra in their kit, whereas amateurs just use the stock barrels that come with the gun. Stock barrels are simply standard barrels and, while they may be from a good manufacturer, they just don’t offer the increased range and accuracy of an upgraded barrel replacement. We recommend that you purchase a longer, higher end barrel as an upgrade for any woodsball gun.

The next must have accessory you will need to bolster your woodsball gun is a folding or collapsible stock. Not only does this make your gun look more realistic, it’s also more practical and comfortable to shoot.

The third and final accessory that we will say is a must have for your woodsball gun is an upgraded hopper. The hopper is that big container that holds the ammo on the top of the gun. Almost all woodsball guns ship with gravity fed hoppers, but these do not offer as fast a rate of fire as force fed hoppers do. Bottom line, swap out your existing hopper for a force fed one.

You may or may not want to add a scope to your woodsball gun as well. This is an accessory that we will say comes down to personal preference, rather than actually enhancing your gun. A scope will give you a better view of the field and can help you to zoom in on a target, but it’s also a pain for closer encounters and will make it more difficult to return fire.

Like we have said, while any of the four recommended products can be considered the best woodsball guns, none of them ship with these upgraded accessories (see a ton here), and we recommend that you purchase at least one of these accessories in order to truly make your gun a force to be reckoned with on the battlefield. Good luck!