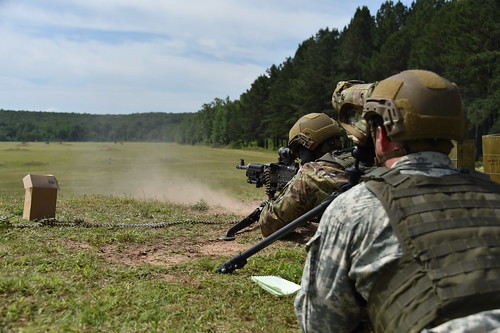 Photo by The National Guard / CC BY

looking for a tripod for your favorite hunting rifle, you have two awesome options: the BOG pod or the Primos Trigger Stick. But really, aside from the fact that these are two different brands, what’s the difference between BOG-POD and Primos Trigger Stick?

On this page, we’ll dive into some of the details that set these two kinds of tripods apart. Whether it comes down to a vendor’s designs, the details of individual products, pricing, or other details—everything you should know when you have to consider a BOG or the Primos.

We’ll start with a look at one of the most popular products from both BOG and Primos before comparing the vendors and their differences. Only then will you know who’ll win the boxing match of Bog Pod Tripod vs Primos Trigger Stick.

The BOG DeathGrip tripod is one of BOG’s most popular products. With a design similar to a camera tripod, this simple, lightweight, and durable tripod is coated black. It’s also available with an aluminum or carbon fiber body, depending on the durability and weight that you’d like to purchase.

This tripod’s legs have three locking positions for kneeling, sitting, and prone shooting, and it’s capable of securing your rifle for hands-free use. For stability, this BOG pod comes with retractable steel spikes that hold the tripod in position. It also has a bubble level and no-slip locks that secure the tripod and maintain stability, even during firing.

The head of the BOG DeathGrip tripod is designed to be incredibly lightweight to make it easy to carry. It also controls up to 50 degrees of tilt and the head pans 360 degrees. A simple tension adjustment knob makes it a cinch to lock your firearm in place once you have the line of sight that you want, and you can quickly undo it to swivel your rifle as needed.

Altogether, this tripod weighs a total of 8 ½ pounds, and it measures just 7” when it’s fully retracted. Extended, it can stand up to 59”, which makes it ideal for marksmen of any height.

All things considered, the BOG DeathGrip tripod’s price is surprisingly reasonable. It offers a lot of versatility and promise, especially for hunters who intend to walk with it over long distances to find the ideal shooting spot. The only thing it doesn’t come with is a carrying case. But because it can retract to just 7” long, you can easily fit this tripod in any sized backpack or knapsack.

With that extensive look at a specific BOG pod, let’s now take a look at a Primos Trigger Stick.

The Primos Gen 3 Series Trigger Stick is a famous hunting accessory. Naturally, it’s worth mentioning that the Trigger Stick is designed first and foremost to be easy to use. That’s because of the tripod’s head, which is shaped like a pistol grip, that allows you to open and set up the tripod using only one hand — hence the name “Trigger Stick.”

This tripod is frequently used by shooters who prefer to stand or kneel, and it’s versatile enough to accommodate cameras, spotting scopes, and other equipment that you may need when hunting. With an all-plastic construction, the Trigger Stick is also incredibly lightweight and ideal for hunters who take long trips into the wilderness on foot.

The Gen 3 Trigger Stick extends between 24” and 62”. The head is made with a contoured grip as well, making it perfect for holding a variety of different equipment. It also has a no-slip backbone for added reliability.

The rotating joint in this Trigger Stick is designed to be stronger and more durable than most of the others on the market. The result is a smooth, effortless pan that makes it easy for you to look through your scope at a consistent speed when you’re searching for a target. Once it’s in a locked position, this Trigger Stick all but guarantees that your yoke and optics are secured.

The Primos Gen 3 Trigger Stick will generally run you a little bit less than the BOG pod equivalent (though price fluctuations do happen), and it’s money well spent on a reliable and popular brand among hunters. 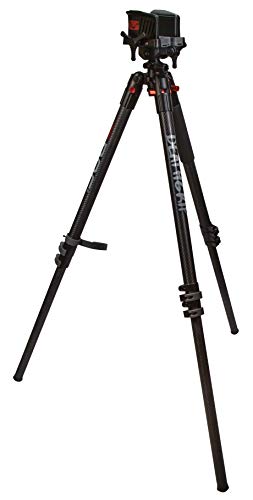 BOG is one of the best-known vendors of hunting tripods and shooting sticks in the United States. BOG has an excellent reputation overall for creating modern, simple, and easy-to-use tripods (also called “pods”) that help marksmen almost effortlessly find their targets.

BOG has eight tripods that it sells and one shooting stick. This is a deliberate choice by the vendor because they know they do tripods best. Their tripods can utilize one of three mounting systems as well: Arca-Swiss, fixed, and Switcheroo. With a variety of colors, prices, and features, it’s almost guaranteed that you’ll find a BOG tripod that works for your shooting style.

Primos, on the other hand, has a much wider range of options from which to choose. Despite the name “Trigger Stick” sounding like these products are only monopods, Primos offers tripod, bipod, and monopod shooting sticks at a huge range of price points. They also have a healthy selection accessories and add-ons that you can use with any compatible Trigger Stick.

This alone makes Primos Trigger Sticks much more versatile than BOG pods, which is a major selling point for the hunter or marksman who wants options.

With that said, let’s answer the final question — should you get a BOG Pod or a Trigger Stick?

Bog Pod Tripod vs Primos Trigger Stick Round 4: Which Should You Choose? 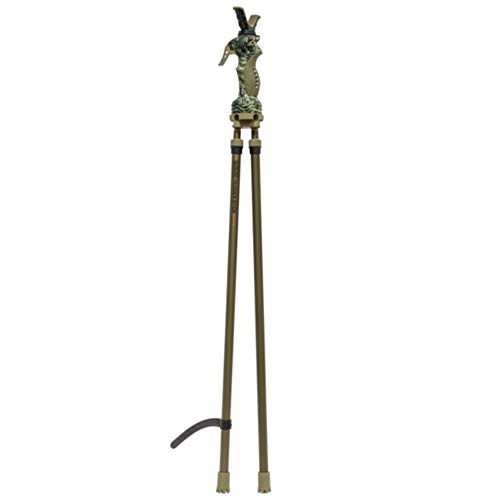 So which vendor should you use for shooting — BOG pod or Trigger Stick?

If you want a monopod, bipod, or tripod that looks modern and comes with all-modern features, then a BOG pod is probably the way to go. These pods are designed to look and work almost the same way as a camera tripod, so you’re most likely familiar with how to use it already — even if you’ve never used it before!

If you’re looking for something more affordable and lightweight, a Trigger Stick is right up your alley. The all-plastic body of these products makes them great for long hauls, their pistol grip heads make setup effortless, and you can swap out your firearm with a spotting scope for spotting whenever you want.

Are you ready to pick a BOD pod or a Trigger Stick? Choose from our two featured products above! Good luck!