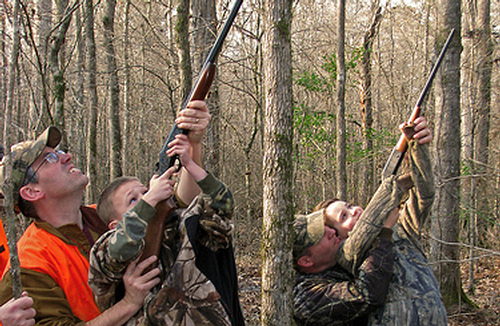 Photo by Roger Smith / CC BY

and similar critters can be a nuisance at times, but you also can’t use your .22 rifle or shotgun to take care of these pests if you live close enough to civilization.  The same goes for recreational hunting; what if you thoroughly enjoy squirrel hunting but can’t do it because all of the nearby areas are in close proximity to families?  Not only is the sound of a traditional firearm being fired enough to disturb most people, if you miss your target and the bullet overtravels, you could even endanger these people.  The last thing you want is to be woken up in the middle of the night with a beefy cop scowling down at you.

However, there is a solution to this problem in the form of an air rifle.  Air rifles come in a variety of different firing mechanisms, calibers, and types, but at an atmospheric pressure of only fifty or less.  This stands in stark contrast to traditional firearms, whose atmospheric pressures can range into the thousands.

When you need to take care of a few pests or want to have a fun day of small game hunting, but can’t disturb or endanger other folks around you, an air rifle is the most simple and effective answer.  Here are 4 of the most popular and best air rifles for squirrel hunting on the market:

Do you need a quality air rifle on a budget?  The Crosman Recruit is a base model air rifle that may not be quite as powerful or as durable as a higher end rifle, but if you don’t have much money to spare, it will more than suffice.  The Crosman Recruit Air Rifle, though lowly priced, is based on the higher end and successful Crosman 66 platform.  The .177 caliber recruit rifle has a velocity of over six hundred and eighty FPS with a five shot magazine and a two hundred round capacity in the reservoir.  The 4×15 scope that ships with the gun is both elevation and windage adjustable, and the stock can also be easily modified to accommodate people who are anywhere between four and six feet tall.  For a price as good as the Recruit rifle comes in at, you will find precious little to complain about.
Crosman Recruit Pump Air Rifle 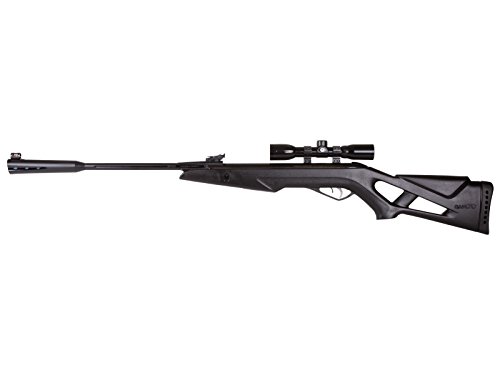 If there is one product that could change the entire way you think about air rifle hunting, the .177 caliber GAMO Whisper Silent Cat Rifle is it.  The Silent Cat is not only powerful at over twelve hundred FPS but the noise dampener mechanism also reduces the noise of the rifle being shot by over fifty percent.  Unlike other air rifles that were designed primarily for target shooting but that can be effectively applied to small game hunting, GAMO designed their Silent Cat rifle specifically with small game hunting and pest control in mind.   For example, the construction is extremely durable, with the all weather black synthetic stock being reminiscent of the high end stock on traditional hunting rifles.  The advanced safety system on the Silent Cat rifle and ventilated rubber pad on the end of the stock also elevate the Silent Cat to a level beyond other air rifles.  This gun would sit on any list of the best air rifles for squirrel hunting.

Hunting those pesky tree rats is certainly one of the funner sports out there. A bad day of deer, duck, or hog hunting can be made instantly better through the liberal application of airgun to squirrel. The Gamo Varmint is a .177 caliber air rifle designed to removes pests and stress from your life. This simple airgun uses a spring pistol to reach 1250 fps at the muzzle with the right pellets. That’s more than fast enough to take a squirrel from a tree. It comes with an adjustable trigger, a 4 x 32 airgun scope, and it’s priced to sell. The Gamo Varmint is easily one of the best air rifles for squirrels.

The next consideration you need to take into account is the lethality of your air rifle.  You want to kill your game, right?  You don’t want to maim it and revel in the killing (hunters might be killers but we aren’t sadists, contrary to the minds of the limp-wristed, anti-gun types).  Hunting is about killing your game humanely, not torturing it.  When you shoot your squirrel, it needs to die instantly and without pain.

You might think that with an air rifle, it will be difficult to effectively kill your prey with one shot.  However, the power of the four air rifles that we have mentioned is not an issue; they will penetrate hard and deeply enough to make sure your game goes down.  But making sure where your pellets find their mark is an issue; shooting your squirrel in non-vital areas probably won’t kill them instantly no matter how powerful your air rifle is.

For this reason, it is highly recommended that you additionally invest in a high quality scope and several hours on the practice range to make sure that your pellets will be going directly where you’re aiming at.

A final consideration to take into account deals with the FPS of your rifle.  Most manufacturers will rate the velocity of their air rifles by the feet per second that they shoot.  However, you should also be concerned about the foot pounds of energy of your rifle, or FPE.  The FPS number can be easily manipulated if the weight of the pellet is dropped.  FPE will take FPS into account, but it also includes the weight of the pellet.  This gives you a far better indication of how hard your pellet will hit your game.

Each of the best air rifles for squirrels here will serve you well for pest control and recreational varmint shooting alike.  Once you’ve selected your rifle and got your practice down, you’ll be good to go.  Good luck!