Photo by Eliot Phillips / CC BY

been a huge boom in the use of night vision for hunting that is directly tied to the spread of feral hogs across the United States. A lot of new night vision users are quickly discovering that overcast kills night vision. The use of IR illuminators solves this problem.

An illuminator casts a spectrum of light only visible to someone wearing night vision. A good IR illuminator will cast an IR beam similar to a flashlight. This will illuminate everything up close, and a powerful illuminator will reach out even further. An illuminator should also be relatively strong, and durable. Since it is going to be used a lot at night it’s bound to be accidentally dropped, bumped, and exposed to the elements. You may have a need for a weapon-mounted light over a handheld unit in certain cases.

You need to find an illuminator that matches your exact needs, and here below, in our humble opinion, are the 4 best IR illuminators on the market. 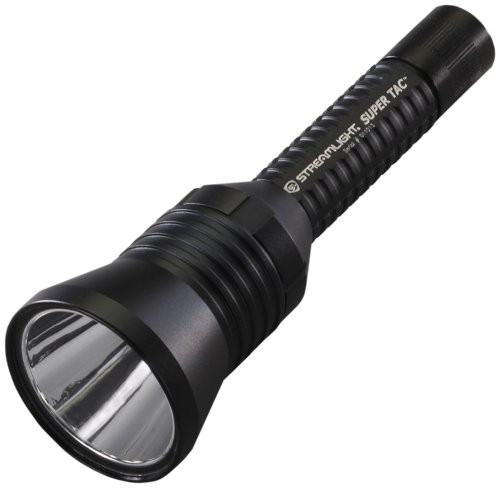 The Streamlight (see full specs) is IPX7 rated for water resistance. This means it can be immersed in up to one meter of water for approximately 30 minutes before water invades the system. The system is also shock-proof so sudden falls and drop aren’t an issue and neither are the recoil forces generated by a rifle. You get a very solid IR illuminator that is perfect for the hardcore hunter and night adventure enthusiast.

The Streamlight Super Tac is equipped with two different settings. The first is the standard constant on mode. Hit the button and the light comes on and stays on. There is also a flash on and off mode. This allows the user to momentarily flash the IR illuminator, using it for a few seconds and then turning it off instantly. The Super Tac uses a single CR 123A battery for 3.5 hours of runtime. The Super Tac simply works and works well, and is easily one of the best IR flashlights for the money. 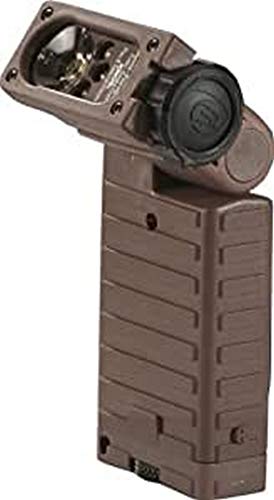 The Sidewinder is a bit of a wild card in the IR illuminator world. It’s kind of like tossing a multi-tool into a list about best knives. If knives were illuminators, then the Sidewinder would be a Gerber multitool. Certainly, it has an IR illuminator, but it does much more than that. The Sidewinder is also equipped with a white light, a red light, and a blue light. To change lights, you simply rotate the button to the corresponding light option.

The Sidewinder has a powerful IR illuminator that can be easily darkened and brightened. By holding down the on button the light goes from medium to bright and automatically back down to low. The Sidewinder also has a rotating head that rotates a total of 180 degrees. The odd square shape also makes it easy to set up on the ground, on a tree stand, or wherever and set the head in the direction you need it to face. There is an option for a helmet mount, and a rifle mount if you choose to go either way. You even have the option for a strobe light, simply tap the on button twice, and do it rapidly. This sets the illuminator to strobe.

The Sidewinder is an extremely well-built piece of gear, and to say it’s waterproof is an understatement. This is the little light that can. The Sidewinder is the current USMC issue flashlight and it has served them very well, and if it works for the marine corps, it’s certainly one of the best IR illuminators period. 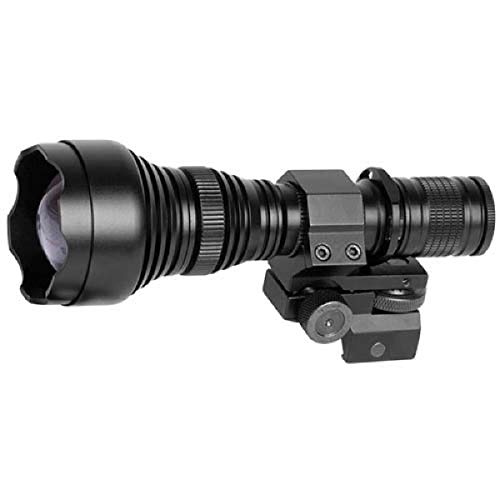 ATN is a well known night vision manufacturer with contracts around the world. They make some of our favorite night vision devices, including illuminators. The ATN IR850 Pro is a fantastic illuminating device that provides an extremely powerful IR beam. The IR850 shines infrared light 300 meters with ease. It doubles the effective range of a night vision device and provides a higher definition picture when combined with an IR scope.

The ATN IR850 is hardly bigger than any standard tactical flashlight, but it’s a bit hefty. This is due to its military grade construction. It’s made from aircraft-grade aluminum and features an all-glass lens for enhanced clarity. This thing cuts a swath through the darkness and lights up the world around you as long as you’re looking through a night vision device.

The ATN IR850 attaches to any picatinny rail system and will work directly mounted to an optic. The unit can be used as a handheld option as well. It’s a rechargeable system and comes with a battery, charger, and mount. The IR850 has three different modes and the battery life is connected to what setting you are using. Low will run for 20 hours, medium for 8 hours, and high for 1.6 hours. This isn’t the cheapest option, but it’s one of the best IR illuminators you can buy. 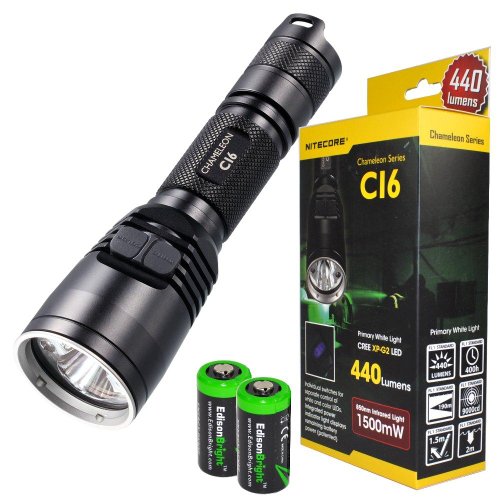 The Nitecore CI6 is a dual-use IR illuminator that functions with both an IR illuminator and a flashlight. The CI6 is a simple but powerful IR illuminator that packs an 850 nm IR beam that reaches out several hundred yards in the darkest of nights. The system packs 5 LED bulbs to generate white light, red light, blue light, green light and most importantly IR light. This complete system weighs only 4.87 ounces and is less than 6 inches long.

It’s designed to be a handheld unit, but, with a 1-inch scope rail, you can attach it to a rifle, shotgun, or crossbow. The unit is diverse enough to be handy for hunting as well as surveillance. The extra standard lights makes it handy in any situation. In terms of IR light, the unit is powerful enough to compete with similar, more expensive options. The all-aluminum construction means it can take a beating and keep on ticking.

The Nitecore CI6 runs off the CR123A batteries and comes with two rechargeable batteries. The flashlight comes with a power level indicator so you always know when it’s time to charge your batteries. This simple system is affordable, well made and will give you plenty of options when the sun goes down.

The use of an IR illuminator with night vision can be the only option on moonless or overcast nights. The infrared illuminating device can cast massive amounts of light that can only be seen by the NV user. The use of these lights can be life-saving when traversing rough environments at night. Just being able to actually see the ground in front of you can be lifesaving, and we hope you’ve found the best IR illuminator for your needs here.  Good luck!